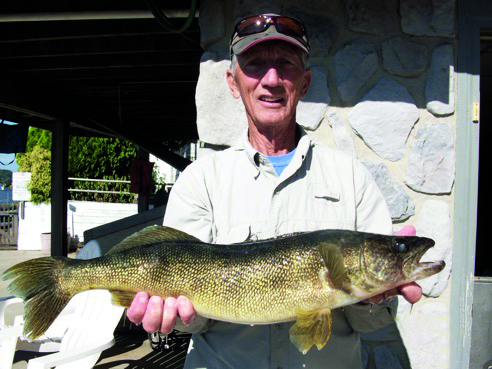 Since 2010, approximately 17-million ‘eyes have been stocked, measuring between 16 and 20 inches.

It’s full game on for walleyes starting May 1, as the statewide seasons are now open. Sure, this spine-studded, marble-eyed mystery has been a year-round legal quarry on the Delaware River, but the last two months have been catchand-release only on all other Garden and Empire state venues where it prowls. No doubt is was exasperating having to release legal-and-longer fish brought through the holes, but starting at this fifth turn of the calendar page, they can be kept and cooked. Or let go, if you choose. However, from this corner, ‘eyes are about catching and eating. Fire up the Fry Daddy!

If it only were that easy.

Save for the muskie, stream wise wild brown trout, and Sherman-sized carp in a city or suburban pond, there is no other species as vexing, frustrating and challenging to catch, on a consistent basis, than the walleye.

The inherent wariness permanently resides in the species’ DNA. While there is natural reproduction in the Delaware, and rumor of successful spawning occurring in the Raritan River as well as a few tributaries, such as “The Canal” leading from Lake Shawnee into the top Lake Hopatcong, figure 99% of the Jersey ‘eyes caught were the result of the work of the Bureau of Freshwater Fisheries net/strip/fertilize/ raise/release efforts.

Just a number to reference the commitment to enhancing the walleye resource: since 2010, approximately 17-million ‘eyes have been stocked, ranging from fry to small fingerlings to advanced fingerlings to yearlings to periodic dollops of two-year-olds measuring between 16 and 20 inches.

So, for all intents and purposes a “raceway creature,” the walleye still maintains that frustrating enigmatic tendency to suddenly prefer this bait to that bait, this profile not that profile, one color then another be it plug or soft plastic or jig head or worm harness spinner blade, this trolling speed to that speed, one rate of drift to another. You get the idea. It’s enough to bring a bass buff to tears.

Limited by habitat specificity, walleyes are stocked in a limited number of impoundments, and also in the upper part of the Delaware River where it flows into the Garden State. In regards to the latter, though, between hatchery releases, natural growth and dispersal, ‘eyes can be readily checked from the Montague-Milford Bridge, down through Trenton in Mercer County. Word is that more than a few are being caught even farther downriver within sight of the City of Brotherly Shove.

(Sussex County; 494-acres/maximum depth 42-feet/electric only): The site of the annual mid-March trap netting for gravid females and males. Opines Hackettstown Hatchery superintendent Craig Lemon, “We’ve caught, stripped and released a couple female walleyes the past few years that were within a few ounces of the New Jersey state record at Big Swartswood. My bet for a new mark? Here, but I’ll say that Hopatcong and Greenwood are right there, and they have more fish, based on their surface acreage.”

(Passaic County; 505-acres/maximum depth 90-feet/electric only): The new reservoir constructed in what is now Long Pond Ironworks State Park that was the “pilot” venue for the re-establishment of the state’s walleye fishery.

(Sussex County; 350-acres/ maximum depth 42-feet/electric only): Owned by the city of Newark, this impoundment is accessed via permit (Newark and non-Newark resident; seniors as well) only, daily or seasonal, for both angling and boat launching. Details and costs available at 973-697-1724 or www. newarknj.gov/card/newarkwatershed.com. A bustling ‘eye office with minimal rod testing.

(Passaic County; 1920-acres/ maximum depth 32-feet/unlimited outboard): So bountiful and bodacious is the walleye fishery, that the largemouth and smallmouth bass fishing is on the downturn. No kidding. The ‘eyes are proving more aggressive and seem to be domineering the habitat.

(Sussex/Morris counties; 2685-acres/maximum depth 50-feet/unlimited outboard): All of New Jersey’s walleye waters are great, but some are greater than others. The Garden State’s largest lake fits the bill. ‘Eyes are everywhere, can be caught all four seasons by those willing to study, complete and pass the impoundment’s ‘eye exam.

The statewide daily limit is three fish at a minimum of 18-inches. The long standing state record is 13 pounds, 9 ounces, and was nailed in the Delaware River in 1993.

Hopatcong has an average depth of 18 feet, with deeper reaches in the 45- to 50-foot range. It is rich with structure and weeds, with enough ledges, drop-offs, points, and habitat edges to make it a haven for walleyes. There are no outboard power restrictions, and launching facilities are available at the Lee’s County Park Marina and Lake Hopatcong Marine. Daily boat rentals are available at Dow’s Boat Rental and Tackle. Shoreline access is limited to Hopatcong State Park and the edges and sloping drops at either side of Brady’s Bridge, which is the link between the towns of Hopatcong and Jefferson. (Note: Parking at the Brady’s locus is at an extreme premium, and local law enforcement is omnipresent, particularly during the spring fishing season.)

As with the other walleye impoundments, Hopatcong’s walleye fishery is alewife-driven. These baitfish get active during late April, and by early May, they are traveling in pods and schools, searching for spawning areas. Light sensitive, they stay in the depths and move into shallower areas in late afternoon and through the evening. Prime fishing occurs from the time the setting sun tickles the treetops through midnight and into the early morning hours. Overcast days, especially those with a misting drizzle, will have herring (and the walleyes) on the move, so a daylight bite under these weather conditions is a given.

“It’s the points,” stresses Joe Welsh from Dow’s, noting that these areas leading to deeper water are havens for walleyes. They stage and then move up into shallower areas with the dwindling daylight. Pickerel Point, Cow Tongue Point, Elba Point, Prospect Point, and Chestnut Point are May ‘eye hotspots.

Welsh continues, “Working shallow-running Bombers, Yo-Zuri Crystal Minnows, and Rapala Minnows will catch walleyes up in the shallows after dark; so will Zara Spooks. A live herring with a couple of small split shots about 20 inches up from the hook will get you fish, especially during cloudy days when they’re not that deep.”

Expect a wide range of walleye sizes, with May fish tipping the scales to 6 pounds and better. To be sure, frenetic catch-and-release action is the May norm.