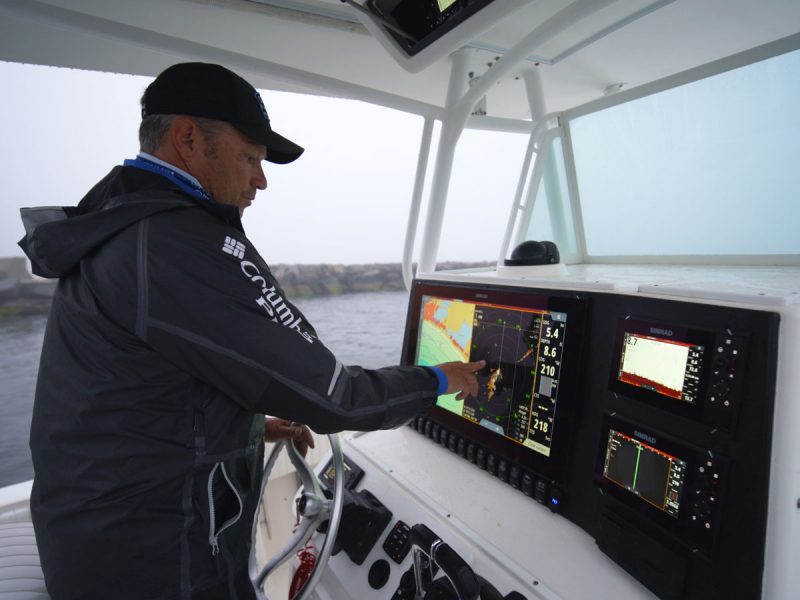 The lines between “marine” electronics and “personal” electronics continue to blur as fishfinders, radars, and multifunction displays take technology and design cues from the smartphones and touch screens we use in our everyday lives. The electronics on our boats are becoming more connected to our personal devices and to the cloud, and the result is better performance, greater usability, and an incredible wealth of information at your fingertips every time you hit the water. If you haven’t upgraded your fishfinder in a few years, you’ll be blown away by what’s available and by the incredible technology that can be purchased today for a fraction of what it used to cost to consumers. Take advantage and make the most of your limited time on the water by making it safer and more productive. 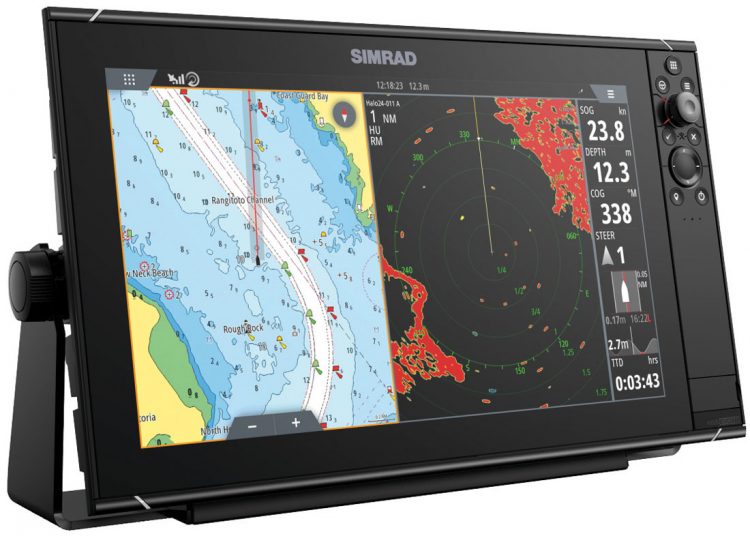 Starting at $2,499 • Visit simrad-yachting.com
Available in 9-, 12- and 16-inch models, the SIMRAD NSSevo3S improves on the previous model with better processing power and a better user experience. That means fast switching between any split-screen combinations, smoother transitions for on-screen movements like chart rotation and panning/zooming, and faster viewing of high-resolution graphics. Every NSSevo3S system supports a variety of powerboating and sportfishing activities, with a built-in GPS receiver and high-performance echo sounder, support for HALO dome and open array radars, as well as integration with an industry-leading range of Simrad autopilot systems.

Starting at $2,199 • Visit simrad-yachting.com
The Simrad HALO20+ Radar delivers an almost real-time view, with 60 RPM operation at close range for the ultimate in collision avoidance. Identify hazards in an instant with VelocityTrack Doppler technology and enjoy simultaneous short- and long-range coverage—up to 36 nautical miles—from a compact 20-inch dome antenna. 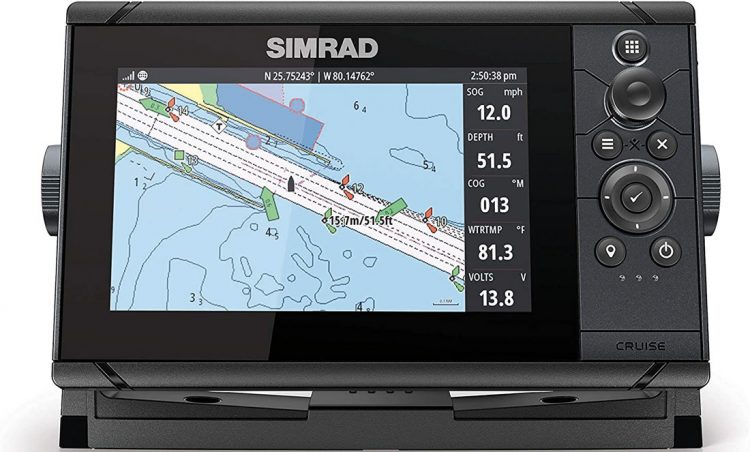 Starting at $449 • Visit simrad-yachting.com
In 2019, Simrad introduced what it calls the most intuitive chartplotter available. The Simrad Cruise has everything you need for simple and straightforward GPS navigation right inside the box, including sunlight viewable display, mounting bracket, and a sonar transducer. Rotary dial and keypad controls make navigating through menus, creating routes and accessing temperature, speed, depth readings and battery voltage effortless. 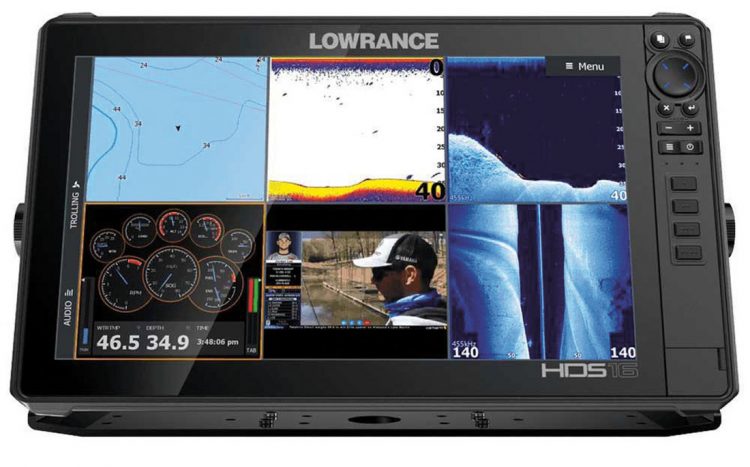 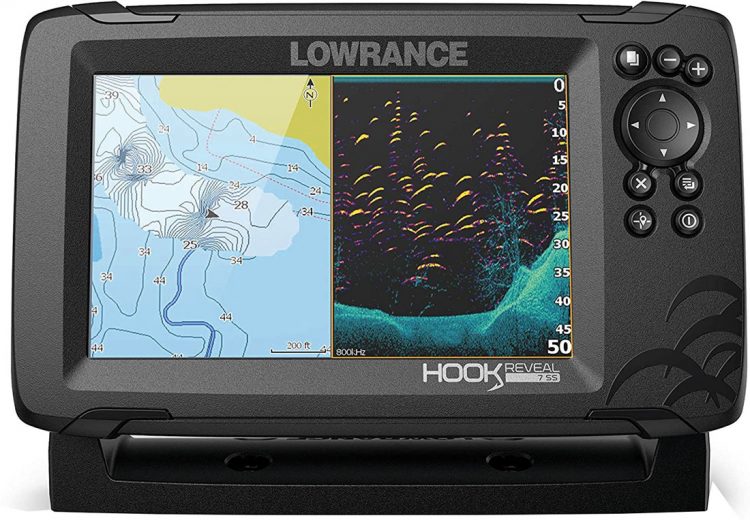 Starting at $299 • Visit lowrance.com
The all-new Lowrance HOOK Reveal makes fishing easier, delivering powerful performance with proven fish-finding tools including Autotuning Sonar, SideScan and DownScan Imaging, and now FishReveal, which makes fish easier to see by combining the benefits of Lowrance CHIRP sonar and DownScan Imaging on one screen. Whether you’re fishing a local spot or unfamiliar water, find the best fishing areas with preloaded US Inland mapping or map uncharted water – in real time – with Genesis Live. Available in 5-, 7-, and 9-inch displays. 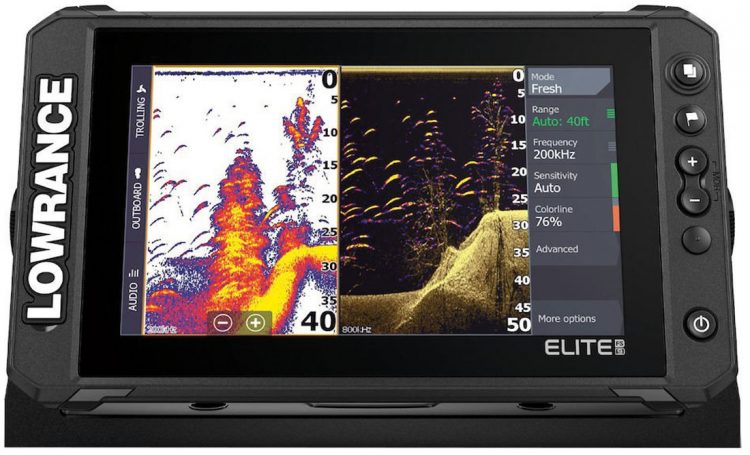 With a history of over 40 years of innovation, Humminbird brings fishfinders, GPS systems, radar, and autopilot to anglers. They offer solutions for all types of freshwater and saltwater anglers with the powerful SOLIX series of 15.4-, 12.1-, and 10.1-inch displays, and the HELIX series of 5- to 12.1-inch chartplotters, now with Dual Spectrum CHIRP Sonar and MEGA Imaging+. New MEGA 360 Imaging transducers mount on Minn Kota trolling motors and sweep up to 125’ in every direction around your boat. Visit humminbird.johnsonoutdoors.com 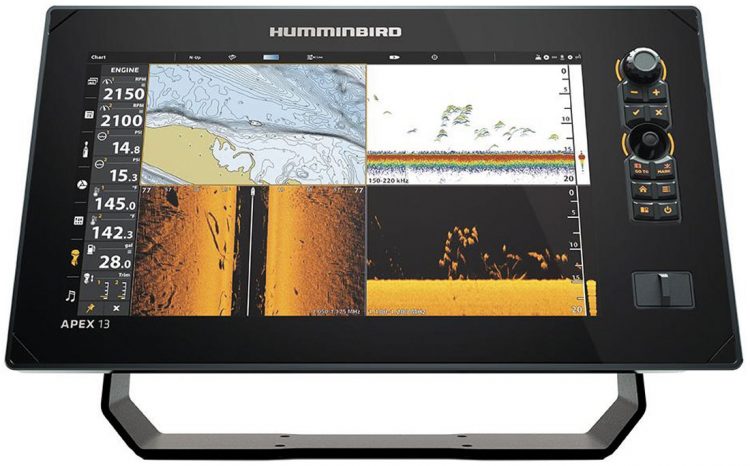 Starting at $3,699 • Visit humminbird.johnsonoutdoors.com
The full-HD, 1920 x 1080 display allows anglers to see sonar and chart images with incredible detail on the premium multifunction units in the new Humminbird APEX Series. APEX’s Cross Touch Interface is powered by a powerful dual-core processor that provides lightning-fast intuitive control, as well as customization of features from either the touchscreen or the softkey inputs. The APEX Series is offered in 13-, 16-, and 19-inch models and supports MEGA Side Imaging+, MEGA Down Imaging+ and Dual Spectrum CHIRP 2D sonar, as well as optional accessory 2D CHIRP transducers. Anglers have their choice of either standard APEX chartplotter models that include a transom-mount transducer or APEX CHO (Control Head Only) models, which gives them the option to pick an accessory transducer to match their specific needs. Anglers can take advantage of Humminbird’s Dual Spectrum CHIRP (2D) sonar and MEGA Imaging+ sonar included on all models, as well as optional 2D CHIRP sonar transducers for specific applications and premium sonar performance. APEX provides a dedicated channel for Humminbird sonar technology, including MEGA Side Imaging+ and MEGA Down Imaging+, with range and depth capabilities up to 250 feet under and to either side of the boat. All APEX models are One-Boat Network compatible and come with a 2-year limited warranty. 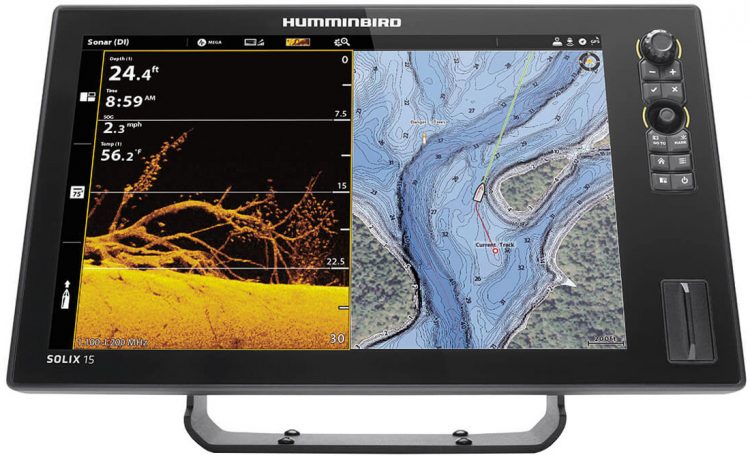 Starting at $2,199.99 • Visit humminbird.johnsonoutdoors.com
The third generation of the SOLIX Series provides an expanded range of MEGA Imaging+, giving anglers the ability to view the highest quality imaging sonar on the market, now at deeper depths and further distances. MEGA Imaging+ on Humminbird SOLIX G3 models now reaches up to 250’ deep with MEGA Down Imaging+, and up to 250’ to each side with MEGA Side Imaging+, enhancing anglers’ ability to find and focus on productive fishing waters. Humminbird’s Dual Spectrum CHIRP sonar is built into every model and provides exceptional 2D sonar, which displays easily identifiable fish arches and produces superb target separation. For anglers looking for deep-water performance, SOLIX G3 models are compatible with optional Airmar CHIRP transducers and now include Airmar transducer ID, making initial setup easy and ensuring peak sonar performance. Standard on SOLIX G3 models, built-in GPS and Humminbird Basemap provide depth information and navigational aids for all continental U.S. coastal waters and over 10,000+ U.S. lakes and rivers. SOLIX G3 models are also compatible with Navionics® charts, providing Humminbird users the widest selection of charts available, ensuring they are covered with premium options no matter where they fish. For anglers looking for an extra edge, all SOLIX models include AutoChart Live, allowing anglers to create their own custom maps in real time. The new SOLIX G3 Series are available in 10.1-, 12.1- and 15.4-inch Cross Touch displays.

Starting at $999.99 • Visit garmin.com
Building on Garmin’s GPSMAP series, the new Garmin GPSMAP x3 Series of mid-sized chartplotters and combination units has a sleek and streamlined design, improved display optics, and a robust feature set that seamlessly integrates into a Garmin marine system – available with and without built-in sonar. Along with higher-res displays and strikingly increased resolution, the new 7-, 9- and 12-inch GPSMAP x3 series offers almost twice the processing power of previous generation’s devices. The series is fully network capable with NMEA 2000 and the Garmin Marine Network, making it easy to build a customized electronics suite, including sonar, radar, autopilots, instruments, cameras, and more. Featuring J1939 engine connectivity for engine integration, including select Yamaha engines, they’re also compatible with OneHelm, an exclusive feature that brings together all the operations and capabilities of third-party devices like EmpirBus digital switching on one screen. Offered with and without built-in sonar. 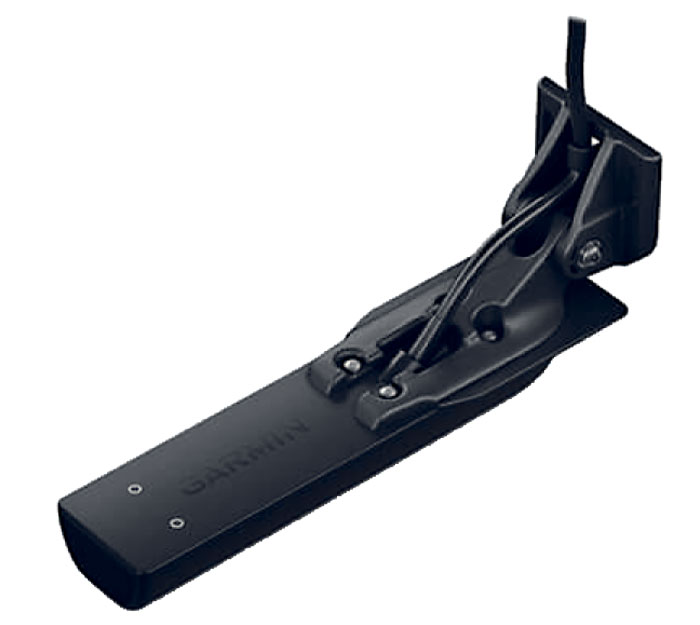 Starting at $179.99 • Visit garmin.com
The Vivid series brings an enhanced sonar experience to Garmin’s STRIKER fishfinder series, now offering Garmin’s most vibrant underwater imagery to date. The Garmin STRIKER Vivid Series comes with a built-in high-sensitivity GPS receiver so anglers can see fish and structure below the boat and quickly mark favorite fishing spots and other areas of interest like brush piles, stumps, or docks, and get back to them. Built-in GPS also allows users to plan and create routes and view their boat’s speed. STRIKER Vivid features seven new color palettes, making it easier to distinguish fish and structure. The STRIKER Vivid series is offered with two transducer options, with and without SideVü, and is available with a 4-, 5-, 7- or 9-inch color display.

With a legacy of marine navigation technology spanning over 80 years, Raymarine products are renowned today for their ease of use, rugged design, and reliability. Their comprehensive range includes the powerful Axiom family of multifunction navigation systems, the Element series sonar/GPS units, and the Dragonfly series of simple yet advanced fishfinders in 4-, 5-, and 7-inch sizes. Visit raymarine.com 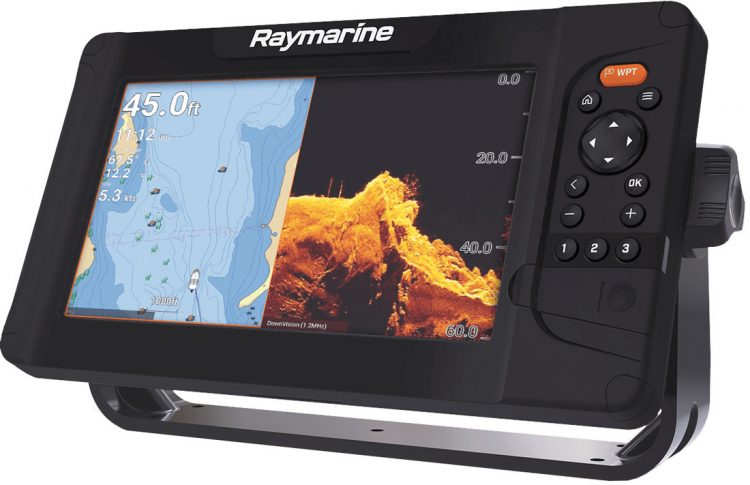 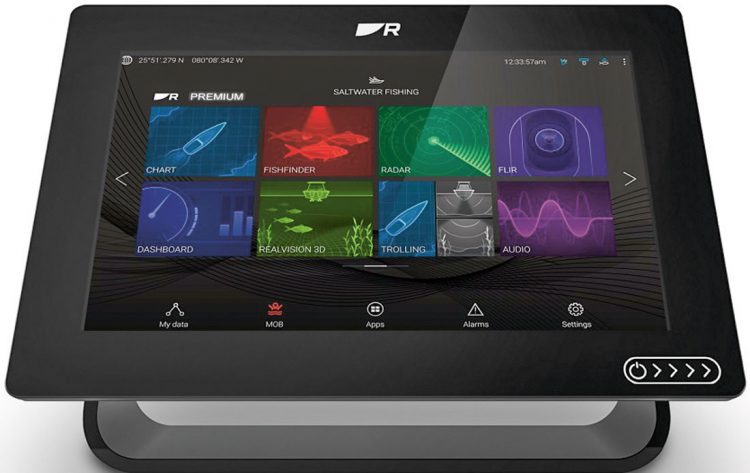 Starting at $749 • Visit raymarine.com
The newest addition to the Axiom family of multifunction displays, the performance-tuned Raymarine Axiom+ is optimized for speed with a quad-core processor for the power to seamlessly redraw charts, navigate with augmented reality, and experience RealVision 3D sonar. New, higher-resolution IPS displays deliver 25% more brightness, and new color palettes offer enhanced visibility in any lighting condition. Available in 7-, 9-, and 12-inch display models. 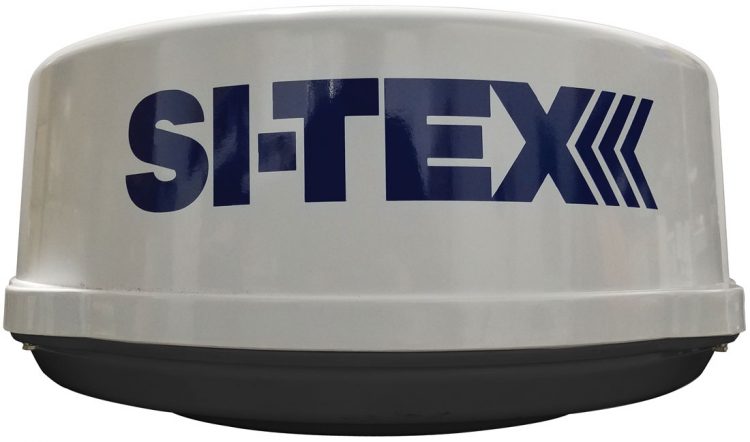 $1,599 (not including MFD) • Visit si-tex.com
SI-TEX has introduced a new wi-fi radar system for use with its popular NavPro Series multifunction displays. The high-resolution MDS-12 4kW Network Radar adds advanced features, functionality, and performance to the 9- and 12-inch NavPro 1200, providing safe navigation in challenging conditions. Wi-fi integration makes it easy to install on almost any vessel. 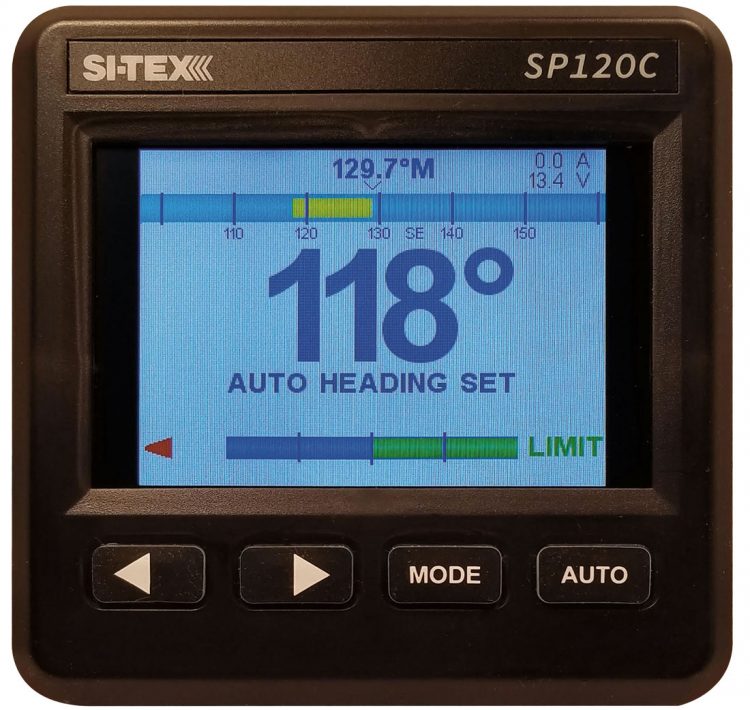 Starting at $2,049 • Visit si-tex.com
The new SI-TEX SP-120C Autopilotfeatures a compact, rugged housing and bright full-color LCD display that can be easily viewed from a variety of different angles on open or enclosed helm stations. This makes the SP-120C an ideal autopilot option for a wide variety of vessels up to 38’ in length, including center-console fishing boats..