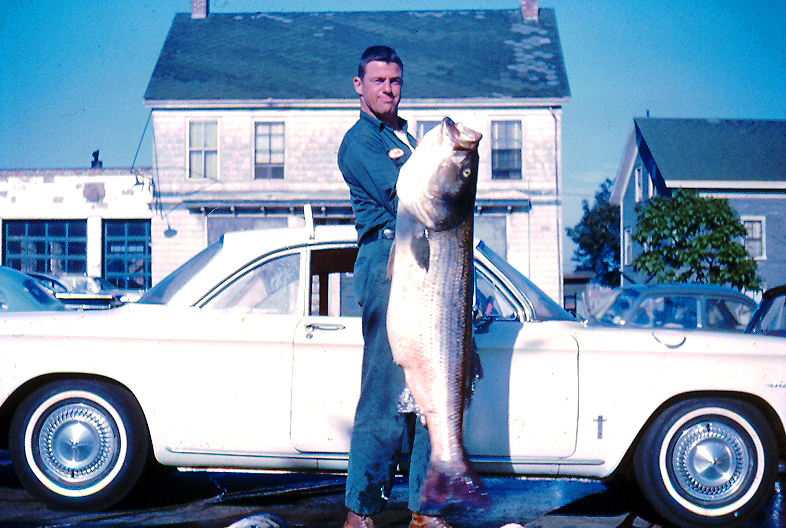 To borrow a line from Frank Sinatra, it was a very good year. The year 1964 has been celebrated by striper anglers, but that’s not to say just anyone could wet a line and catch a 50-pounder.

I know of several better-than-average fishermen who did not earn enough points to be eligible for a bronze 100-point R.J. Schaefer Fishing Contest award pin. Back then, pins were awarded based on a point per pound for each fish over 15 pounds. Those fish had to be weighed at an official weigh station and documented on an affidavit signed and stamped by the weighmaster. Typically, it took any combination of seven stripers over 15 pounds or five at 20 pounds to earn the highly prized award pin. However, during that historic season, I had a deckmate who earned his pin in one night, landing a pair of stripers weighing 61 and 39 pounds, plus a few other specimens over 15 pounds.

There was a great deal of interest in fishing in those days, particularly striped bass fishing, and the competition between the clubs in the R.J. Schaefer contest was intense. Our limited membership Linesiders Bass Club, with less than two dozen active fishing members, held our own despite competing with organizations and other groups with memberships that counted into the hundreds.

Early on, I had an inclination that 1964 was going to be a special year during one of our first May night trips in Mt. Hope Bay. I was anchored up just outside the mouth of a tiny stream that provided great early schoolie fishing on a dropping tide as silversides, chubs, and eels emptied out into the shallow water. Charlie Mello was aboard and caught a 43-pound bass on a chunk of cut herring, while I landed a 25 and a 28. Those fish were caught in three feet of water where they were prowling for herring dropping back out of the rivers. Prior to that season, we were delighted to catch a few stripers between 5 and 15-pounds in early May, though there were very few school-sized stripers around that spring.

In mid-May, fellow member Teddy Lima began the run with a fat 55-pound bass much earlier in the season than we usually chalked up one of those Holy Grails of striper fishing. Our more affluent members who fished with the Cuttyhunk guides began to ring up 50s on the June new moon and continued to catch throughout the season. You may recall a 1964 photo in this column of Charlie Cinto, Russ Keene, and Howard Vickery fishing with Captain Charlie Haag. Their catch consisted of four 50s, numerous 40s and 30s, and a single bluefish trolled up with big swimming plugs on Sow and Pigs Reef.

In late June, Herbie Dickinson caught a 64-pound, 4-ounce bass on Ed Souza’s Jigster. Decades before the internet, news traveled via house phone or snail mail, yet it didn’t take very long for word of a big fish or big catch to proliferate from Maine to Montauk. We heard about that catch just hours after it pulled the old Cuttyhunk scale down to those magical numbers because we met Herbie and Eddy when they pulled into Padanaram Harbor. The story was that it was caught trolling a big Creek Chub Giant Pikie on Sow and Pigs Reef, but I was an immediate skeptic. I had sold the skipper three dozen eels earlier in the week and put them in his holding crate at the marina. I also ran his boat from time to time, and he never allowed me to take that classic 26-foot McInnis-design bass boat anywhere near the rocks and current of Sow and Pigs, no matter how calm.

That fish was caught in the dark of night with no witnesses other than the skipper and the angler, yet the following day in the evening edition of the Boston Herald, there was an article by Henry Moore discussing the catch, which was leaked to him by someone from Cuttyhunk who observed the fish on the guide’s dock scale. To paraphrase the words of columnist Moore, “They broke the 60-pound barrier at Cuttyhunk last night with a 60-pounder caught at Sow and Pigs, but getting the details of that catch would be akin to having the Russians share their nuclear secrets.”

One cool September night toward the end of that historic decade, Herbie Dickinson was aboard my boat on a night when we combined for a modest catch of stripers from 12 to 28 pounds. After transferring our catch from my boat into the trap company icehouse, we were sitting on a stool at the harborside Fo’c’sle sipping cold 35-cent Narragansett beers and looking back on the momentous season. After a few drinks, Herbie turned the conversation from the present to that fateful night, and he made a full confession.

Herbie felt bad about the story the skipper had concocted about the method and location of his 64-pound, 8-ounce striper. He told me they were drifting eels in the first cove on Nashawena Island east of Canapitsit Channel when he hooked the big striper. In two drifts, they picked up four fish, which caused them to anchor up and cast. The disturbance they caused rattling the anchor and chain in the shallow water disturbed the remainder of the school, which moved out of the shallow cove.

Another reason that the 1964 season stands out for me is because it was the year I caught a 58-pound, 8-ounce striper on a steamy July night. A friend caught a 55-pounder from my boat two days later. Before the end of the month, my mate was aboard and bested a hard-won 61-pound, 4-ounce striper in the very same boulder field the aforementioned stripers came from. In 10 days, we accounted for five 50s and one 60.

One of the best catches I ever experienced occurred on my birthday in September 1964. It was a long night of casting, with few rewards until the moon came up. As soon as the glow of that golden orb peeked over the horizon, all hell broke loose – almost as though someone had turned on a switch. It was the fourth or fifth largest catch I had ever been engaged in, and that night still brings fond memories of all the fish we caught and all the big fish we lost in our haste (and greed) to boat the fish and get our lines back out to tempt another one. That night, I had the remnant of a single eel that accounted for six fish before there was no longer any place to hook it.

While 1964 was special, a peak moment in the golden decade of striped bass fishing occurred on June 16, 1967, when Cinto caught the first modern-day 73-pound striper, setting the tone for the remainder of that historic era. At least one other (some fishermen will never tell) 70-pound striper followed. Less than two miles from where Cinto caught his 73, Ed Kirker, a fellow member of our Linesiders Bass Club, caught his 72-pounder on a live eel fishing less than 75 yards from where I was anchored up in Barge Cove, around the corner and just east of the Cuttyhunk clubhouse. It was a chilly night in late October of 1969, which in my area usually signals the last month of our fall big-fish migration.

That decade was the last of its kind, yet our inclination to plunder that precious resource continued into the 70s as the striper biomass declined precipitously, with predominately large fish and very few school-size stripers. Under severe pressure from anglers, managers finally conceded that the unregulated pillaging could not continue. One senior biologist of that day confided that the managers were hesitant to institute preventive reduction measures earlier, fearing backlash from fishermen. With an obviously diminished resource, they could introduce modifications with fewer political repercussions. That is what we refer to as crisis management.

I believe that our nearly unconstrained harvest of stripers was responsible for the decline that eventually brought about the moratorium of the 1980s. Even with the diminished striper breeding biomass, a combination of restricted harvest and great luck produced several good years of spawning success and bailed us out of what could have been the catastrophic demise of this resource we took for granted. The current management structure of one fish from 28 to 34 inches is yet another attempt to rebuild the biomass.

Sinatra can have his small-town girls, warm summer nights, limousines, and vintage wine. I’ll take stripers, along with a rerun of the 1964 season, with regulations mandating a one-fish bag limit, a slot from 24-to-34 inches, and one $50 trophy tag with those funds 100% dedicated toward the buyout of all existing gill net licenses in Maryland and Virginia. While I was a more-than-willing participant in the faction responsible for the near demise of stripers, those webs of death have no place in the routes the stripers must take to arrive at their spawning grounds.