To get the most out of the fishing experience, there are certain skills that all anglers need to keep in their back pockets. Whether it’s how to properly sharpen a fishing hook or how to release a fish, the more angling skills you master, the more fun you’ll have and the more fish you’ll catch. Check out these top 10 Skills that the OTW Staff thinks every fisherman, fresh or salt, boat or shore, young or old, needs to know.

There are two ways to remove a fishing hook while still out on the water and both take a strong stomach to pull off. The first, and most gruesome, is to push the hook point and barb out of the skin and to cut it below the barb with a pair of wire cutters. This can be extraordinarily painful, but once the barb is cut off, you can back the rest of the hook out. The next method removes the hook the same way it came in. First, if it’s a fishing lure with multiple hooks, cut the embedded hook off the lure if possible. Next, take a piece of heavy line and wrap it around the bend of the implanted hook several times. Wrap the other ends of the line around your dominant hand. With your other hand, press down on the eye of the hook so that it touches the skin of the hooked angler. Make a strong, sharp yank on the line out and away from the eye of the hook. Do not attempt either of these procedures if the hook is in a sensitive area like the face. Also, be sure to disinfect the wound and monitor it closely for signs of infection.

The legal way to measure your catch differs by species. In the Northeast, most fish, like striped bass, must be measured from the tip of the snout to the farthest point on the tail with the measuring device laid flat underneath the fish. Tuna are measured in a curved line, tracing the contour of the body from the tip of the upper jaw to the fork of the tail, which crosses the dorsal insertion of the pectoral fin and the dorsal side of the caudal keel.

3. Use a Circle Hook 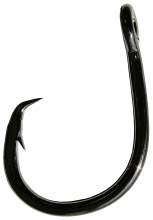 Both to prevent gut-hooking fish and to get more secure hooksets, learning to use a circle hooks is an important tactic. When a fish takes a bait fished on a circle hook, you do not set the hook as you would with a J-hook. Instead, point the rod tip at the fish and let the line come tight. As it does, lift the rod slowly and begin reeling. This motion alone is all it takes to securely lock a circle hook into the corner of a fish’s jaw. 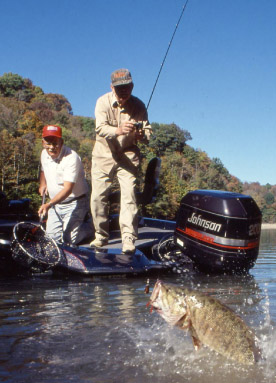 Many trophy fish are lost right at the net, usually on account of an over-eager attempt by the netman. Use these pointers to net that next trophy catch so you aren’t left talking about the one that got away.

A hooked fish can see and will try to avoid a net. Therefore, keep the net out of the water until the last second. Also, do not try to net the fish too soon. A green fish will dive at the sight of the net and you could hit the line, causing it to break or the hook to get knocked out of the fish’s jaw. Net the fish’s head first – this will limit the fish’s potential avenues of escape. Net the fish in a one quick motion. Dip the top-half of the hoop into the water at a 45-degree angle only a few inches in front of the fish as it nears the boat. Jab the net toward the fish swiftly and tilt the net so the hoop is nearly parallel with the water as you sweep the net and fish upward.

Both fresh and saltwater fishermen can benefit from rigging a soft-plastic lure Tex-posed style. This rigging method makes the bait mostly weedless (like a Texas rig) but keeps the hook point exposed for solid hook-ups.

Start by laying a worm-style hook next to the lure, positioning the eye of the hook just beyond the front end and taking note of where the hook point will pass back through the body of the bait. Begin threading the lure onto the hook, but after the hook has passed about a half-inch into the bait, push the point out the underside of the lure. Slide the lure up the shank of the hook and set it just behind the eye. Then push the point of the hook all the way through the body of the bait, making sure to keep the bait as straight as possible on the hook.

“Walking the dog” is a very effective topwater tactic that is will draw strikes from largemouth and smallmouth bass, stripers, blues and even tuna. To achieve this zig-zagging motion with a Spook-style lure, cast out and keep your rod tip low to the water. Snap the rod downward sharply, but immediately return it to the starting position. This momentary slack in the line allows the lure to wander to one side. On the subsequent snap of the rod tip, the lure will change direction and “walk” in the opposite direction. Repeat the cadence throughout the retrieve, varying the speed and adding in the occasional pause until you figure out what the fish want.

A common mistake anglers make is not setting the drag “through the rod.” The guides and rod will all add resistance to the line when fighting a fish, so simply setting your drag just by pulling line from the reel is not the best way. Proper drag setting requires two people and a hand scale. Attach the line to a hand scale and have one person hold the rod and reel in a fish-fighting stance while the other person holds the scale. The person holding the scale should apply steady pressure until the drag begins to slip, taking note of the reading. For most fishing, setting your drag at about 1/3 the breaking strength of your line is ideal.

Keeping your hooks sharp is one of the most important things you can do to become a more successful fisherman. Hooks will become dull through extended use, so hitting them with a file every once in a while is a must.  To properly sharpen a hook, you’ll want to work the file from the point toward the barb. File the hook in three positions to effectively create a triangular point. Be careful not to file down the hook too much, as this can weaken the hook point.

Being able to fix a rod tip will at some point save you from having to cut a fishing trip short. Whether you’ve chipped the ceramic insert or snapped the tip right off, the following fix will get you right back fishing in no time. For this process you’ll need a lighter, some heat glue and a replacement tip. First, if you need to remove the old tip, hit the base with your lighter for a few seconds at a time until it loosens. Avoid excessively heating the rod tip as this could damage the blank. Once you’ve removed the old tip, use the lighter to melt some of the heat glue and apply it liberally to the rod and the replacement rod tip. Quickly push the replacement tip onto the rod and carefully align it so that it lines up with all of the other guides. Give it a few minutes to cool, then remove any excess glue and get back to fishing. 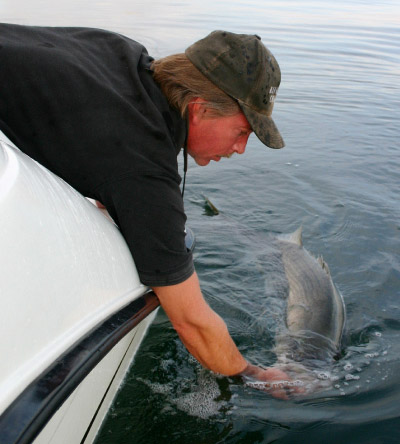 Properly reviving and releasing your catch is essential to ensuring the survival of future generations of fish. Whether you’re fishing for false albacore and tuna, stripers and blues, or bass and trout, the general principals are the same. You want to get water moving through the mouth and over the gills. Do not push a fish back and forth, which will cause water to flush backwards over the gills, potentially damaging them. With larger game such as tuna, you may need to hold the fish in place with a lip gaff and slowly move the boat forward while keeping the fish upright. In all cases, the fish will let you know when it’s ready to swim off. Fins up and a kicking tail are good signs that a fish is ready to go.