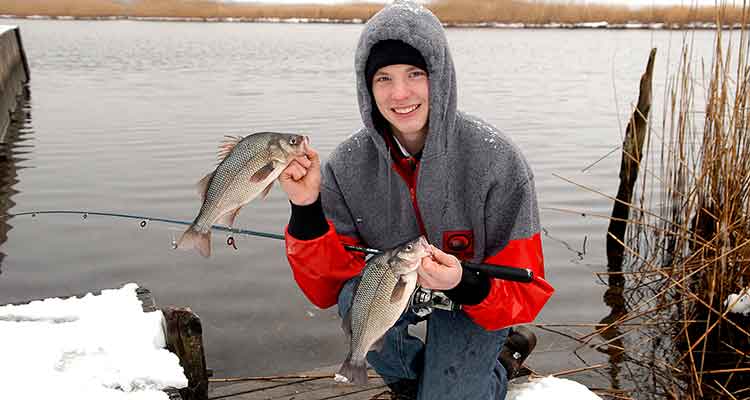 Most anglers keep themselves relatively busy during the winter months by tending to much-needed tackle maintenance, as well as keeping themselves entertained by attending several of the numerous outdoor shows scheduled throughout the winter and early spring. But let’s face it, during any mild spells, our instinct and concentration quickly drifts to the waters we love. While ‘tog may be chewing well at the deepwater wrecks, and cod may be slamming diamond jigs and clam baits southeast of Block Island, this kind of winter action is not for everyone. The good news for shore-bound and kayak anglers looking to shake the winter blues is that white perch stage an exceptional winter run for those who quietly ply the local rivers and creeks. Winter through early spring is the most productive time to catch white perch, because at this time, they are tightly schooled and ravenous.

White perch are a mystery to many anglers from the saltwater side of the game. For starters, white perch are often mistaken for a freshwater species when in fact they are quite abundant in the brackish and salt creeks that surround much of the Northeast Coast. Since white perch can also adapt and become acclimated to freshwater in many areas along the coast, many landlocked lakes are successfully and abundantly populated with this underrated species. Quite often, anglers encountering them as bycatch while pursuing other species misidentify white perch. All in all, in spite of providing excellent sport on light tackle and fine table fare, they maintain a relatively low profile among Long Island and New Jersey’s more desired species.

With stringent regulations on many salt and freshwater species spread across the Northeast states, many anglers are seeking alternative targets to help them stay active on the fishing front, particularly during the winter months. Fortunately, regulations are quite liberal when it comes to white perch. For one, the season is open all year, size limits are nonexistent, and the daily bag is 25 in New Jersey and at your own discretion in New York. Thus, fishermen are welcome to take advantage of the white perch’s delectable taste, without being wasteful.

“White perch” is a misnomer; the species is not a true perch but a member of the temperate bass family, a relative to the striped bass. It is similar in shape to the striper, but it has a deeper, less rounded body and lacks the horizontal stripes. In addition, white perch will never grow nearly as large. In fact, “whites” are typically small and slow growing. The average white perch caught in flowing waters mostly weigh less than 1 ½ pounds, but don’t be surprised to land one pushing two pounds, particularly in areas with an abundance of baitfish. Certain bodies of water will produce larger white perch. For example, eastern Long Island’s Montauk Point is home to a small landlocked body of water known as Fort Pond, which harbors white perch in excess of 2 pounds. Long Island’s largest lake, Lake Ronkonkoma nearly 60 miles west of Montauk, is loaded with 6-inchers. Yet, when it comes to brackish feeder creeks or rivers, there’s no telling how big the next perch you catch may be.

Like their striped bass cousins, the adaptable white perch roams widely in a never-ending search for food including crabs, shrimp and worms, all of which are abundant during the winter and spring.

Light tackle is best for a fair yet fun battle against these feisty little critters. Spinning outfits in the 6- or 8-pound class are ideal and can still handle any lingering schoolie bass as well. My favorite perch combo is a 6-foot Lamiglas Tri-Flex TFX6015S spinning rod with a Team Daiwa Advantage spinning reel filled with Stren 8-pound mono. The TFX6015 is a relatively new rod from Lamiglas designed especially for jigging lead head and bucktail jigs.

Whether you prefer natural or artificial bait, rest assured that both methods are productive. Some days one method will outdo the other, so it’s wise to plan accordingly and be ready either way. On the natural side, casting out a nice fat juicy nightcrawler would be hard to beat. I like a size 8 Eagle Claw or Mustad bait-holder hook tied directly to the main line with a Palomar knot and allow the worm to sink to the bottom. If you can obtain live or fresh grass shrimp, they are extremely effective as well. Just as productive and relatively easy to maintain are live shiners and killifish, which should be hooked through the lips for maximum results. Should the current be moving too quickly to allow the bait to lie on the bottom, it wouldn’t hurt to place a split shot or two a foot or so above the hook to help keep it in the strike zone. For angling kids, you may want to attach a float to their line. Just make sure the baited hook is kept close to the bottom for best results.

Bouncing 1/16- to 1/8-ounce white or chartreuse marabou jigs or 2- to 3-inch chartreuse or pink twister tails on a 1/8-ounce lead head will account for a good share of perch as well. If you really want to put together a solid catch, add a night crawler to the jig. Keep in mind that the colors I mentioned have proven themselves effective over the course of time, but there are many productive colors such as red, yellow and black. It would be my strong suggestion to bring along an assortment should the fish be on the picky side.

Despite the relative abundance and schooling nature of white perch, finding them day to day can be challenging. In creeks where tide and current play a significant role, my experience has shown that the top of the tide, at the start of the outgoing, is peak feeding time for perch. This is when food flushes out of the backs of creeks and estuaries. More often than not, you will have to search out schools of perch with no visible clues to their location; prospecting is a key part of the game. Moving and casting around will by far outweigh the option of staying stationary while hoping that a school may swim your way. Tin boats and kayaks are perfect tools for plying tidal creeks and rivers as they give you access to areas that would otherwise be unreachable from shore, and they allow you to cover lots of water in a relatively short time.

Just about any feeder creek or river that spills out into a bay or the Long Island Sound has potential for producing white perch in February and March.

On Long Island, the Carmans River, south of Southhaven County Park, especially in the tidal waters south of the Sunrise and Montauk Highways is great for shore-bound anglers and kayakers. Shore bound fishermen will also find solid action in Beaverdam Creek in Brookhaven, accessible from Beaverdam Road. Tuthill Creek, just west of the Patchogue River, has been consistent in recent years and as have Browns and Green Creeks in Sayville. The most consistent white perch fishing in both quality and quantity has to be the tidal waters of the Connetquot River, particularly near the train trestle and Dowling College in Oakdale. It is here that tin boaters, kayakers and land-based anglers alike will find plenty to be excited about during the winter months, as plenty of quality perch are the norm.

In New Jersey, cold-weather white perch can be caught in the Delaware River and its lower tributaries, such as Crosswicks, Rancoas, Cooper, Big Timber and Mantua Creeks. Coastal rivers such as the Raritan, Mullica and Great Egg Harbor River produce too. Local deep lakes and reservoirs possess excellent white perch populations where they can be caught year-round. Depending on the time of the year, they can be caught from the shoreline, by boat or through the ice.

While these fish may not win any awards for acrobatics or speed, white perch are feisty little scrappers with a lot of heart. And they’re plenty tasty in the pan, too! So this winter, after the gear is tuned and you’ve had enough of the outdoor shows, grab a rod and shake off some of those cobwebs in exchange for a few hours of white perch fun. More importantly, don’t forget the kids.