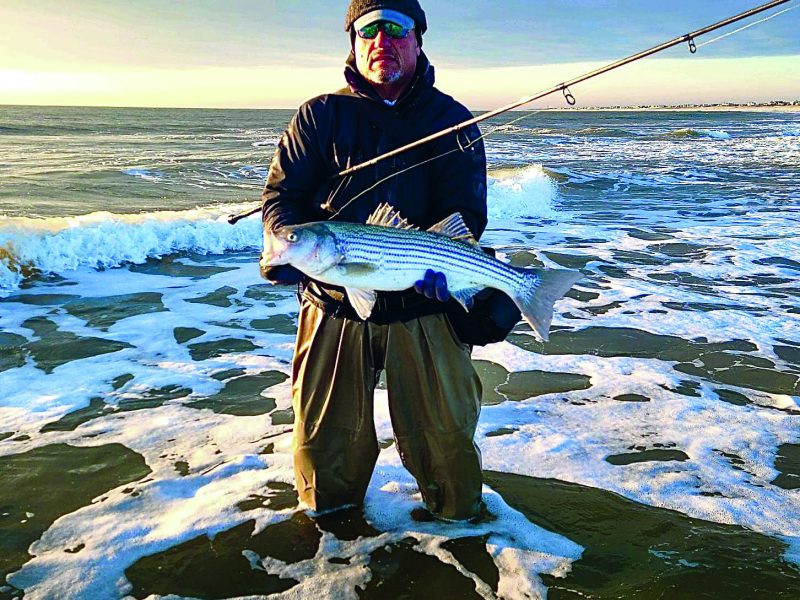 The number-one thing that makes a successful fall run is having bait on the beach to draw in gamefish. You can be ready to go with knowledge, the best tackle and equipment, plus the passion to fish in some of the season’s worst weather conditions, and it won’t matter if the bait stays offshore. Often, salt in the wound comes in the form of hearing about how great the fishing has been from the many boaters catching fish well out of surfcasting range.

Knowing when and where the different baitfish travel to and from at key times during the fall makes all the difference in finding stripers even in “bust” years.

There is no mistaking mullet schools traveling quickly down the coastlines after exiting the back bays and inlets, They tend to leap or slice out of the water, even when not being chased by predators.

These fish are the first to migrate, usually mid-September into early October here on the northeast coast, but the later-running schools are much bigger, commonly called “Corncobs,” into November.

If you are lucky enough to find and work this type of bait, you will make memories for a lifetime. I once found a school of large mullet that I followed down 20 to 30 miles of coastline over three or four days. Along with some other New Jersey surfcasters, I caught 15- to 40-pound stripers and 10- to 15-pound bluefish on topwater poppers as they blasted mullet out of the water.

Juvenile menhaden, while also migrating, hang around much longer than mullet, and tend to linger in some areas. How long the peanuts stick around is heavily dependent on the conditions, winds, and tide.

These tightly-packed schools can be seen from a distance and appear as black or purple blotches on the water. Pods of migrating peanut bunker move through at the perfect time, with the biggest schools passing along the South Shore of Long Island and the Jersey Shore at the same time as large schools of migrating striped bass. However, peanuts are very susceptible to any large tropical storms or Nor’easters spinning up the coastline. Sea conditions resulting from hard northeast winds will pull them far out to sea, never to be seen again in the surf.

If Mother Nature cooperates, we will have fantastic fishing around the peanuts, using one of my favorite lures—metal lip swimmers. There is nothing like finding a peanut bunker school that starts out as what I call “Happy Bunker,” a school of unbothered bunker going about their business until a large splash disrupts the peace and turns happy bunker into nervous bunker.

Cast a metal-lip lure over the school, retrieve it slowly, watching it wiggle just below the surface, and hold on!

Sand eels don’t move fast, and often hang out in areas for weeks, sometimes months. An angler can stand in one spot for hours and constantly catch fish. They dig into our beaches late in the year when surf water temperatures are in the 40s and 50s, and striped bass show up each day to feed on them like clockwork.

This is the time for long, slender metal lures with tube hooks that you rig up to also deliver a teaser. Cast it out as far as you can throw, then retrieve it slowly, dragging it along the bottom back to the beach, and you are going to catch a striped bass. I’m sure of it.

It doesn’t happen as much today as in the past, but the end of the season is when to look for sea herring heading down the surf line. When and if they show, there is a good bet there will be some large, late-migrating striped bass on their tails. Be ready to cast out larger pencil poppers and surface plugs.

Keep your fingers crossed because if any or all of this bait arrives, the 2021 fall run will be one to remember.