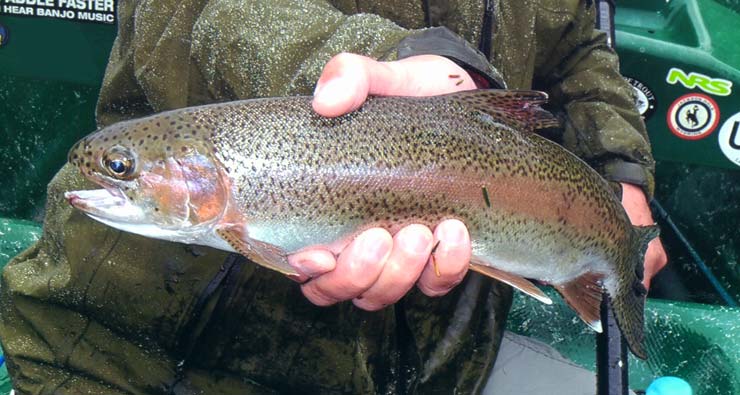 Wild rainbow and brown trout make the West Branch of the Delaware a premier fishing destination.

The West Branch of the Delaware River begins as a modest-sized trout stream that flows into Cannonsville Reservoir in New York State. It meanders through Deposit, New York, eventually forming the boundary line between New York and Pennsylvania. The river then flows southeasterly, meeting the East Branch at the town of Hancock, New York, to form the main stem of the Delaware River.

The West Branch is home to wild rainbow and brown trout, and is maintained and regulated as a special trout fishing area—no trout are stocked in this area by Pennsylvania or New York State.

Neither trout species is native to the river. The rainbow trout arrived, rather accidentally, in the early 1870s when a shipment of juvenile trout from California, destined for an upstate New York hatchery, stalled near Callicoon, New York. The Erie Railroad trainmaster, Dan Cahill, feared the juvenile trout would perish in the hot weather, and ordered that the fish be dumped into Callicoon Creek, a major tributary of the Delaware River. The juvenile rainbows quickly found their way into the Delaware River, where they thrived. Today, fishermen on the West Branch of the Delaware catch the descendants of those rainbow trout from nearly 150 years ago.

The brown trout’s introduction to the Delaware was a bit less accidental. With populations of native brook trout in steady decline in the late 19th century, New York State ordered fertilized brown trout eggs from Germany. When the eggs arrived, they were delivered to a state hatchery in Caledonia. From there, the brown trout were taken to area trout streams where they quickly adapted to their new homes.

Like the rainbows, the browns eventually found their way into the Delaware River system by following tributaries. The browns and rainbows proved to be compatible, and both trout species thrive in the Upper Delaware to this day.

Spawning time for rainbow trout is in the spring, during late March and April. At that time, the trout will cluster over gravel beds of the West Branch and up into the tributary streams to perform their spawning ritual. Years with lots of snowmelt, resulting in high water, force more of the rainbows into tributaries.

Brown trout are fall spawners, and generally head upstream to spawn. If they are hindered by low water, they will spawn in the larger tributaries. Regardless of the stream conditions, they will spawn on time.

Trout fishing begins on April 1 and concludes October 15. Though the stream is not designated as catch-and-release only—the daily limit is two trout per day with a 12-inch minimum size—anglers, fly-fishermen and spincasters alike, almost exclusively practice catch and release with these wild fish. From October 16 to March 31, angling is prohibited to protect spawning trout.

To fish the West Branch, you must possess a current Pennsylvania or New York fishing license, plus a trout stamp. Both states’ licenses are reciprocal, and allow anglers to fish from either side of the river or a boat.

Incredible insect life and prolific hatches give the Upper Delaware the reputation for having the best dry fly-fishing in the East. The hatches start in April with black and brown stone flies and Hendricksons. May and June bring sulphurs, black caddis, green and brown drakes. Late summer sees more sulphurs, tricos, and flying ants, while the fall hatches include tan caddis, October caddis, and slate drakes. No matter when you’re on the river, make sure you have a selection of blue wing olives, as they can hatch during any month.

Spring and fall have great streamer fishing, and nymphing works as well.

No matter when you go or what you throw, the wild trout of the West Branch are sure to amaze you with strength, acrobatics, and beauty that no hatchery-born trout could ever hope to match.