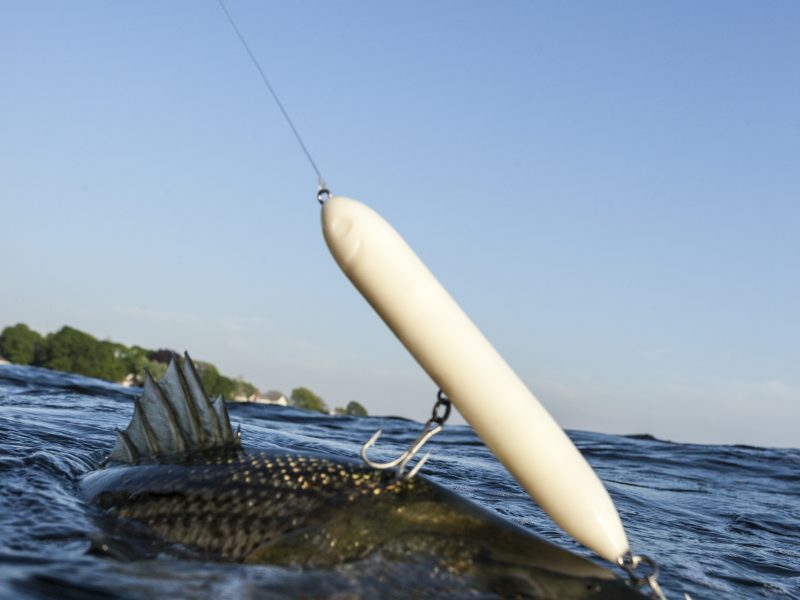 It’s pretty common to foul-hook striped bass while surf fishing. (For reference, to “foul-hook” is to accidentally snag a fish in the head or body instead of the mouth.) Although most anglers would assume that stripers get foul-hooked because they miss the plug, I’m convinced there’s more to it. I’ve had fishing trips when nearly every single striped bass was foul-hooked on the head or gill plate—suggesting it was something more than just a case of bad aim.

Thanks to hours spent preparing gear, scouting the best locations, and making countless casts, I’ve been lucky to witness breathtaking surface feeds. Seeing striped bass crash on baitfish while birds dive down from above is awe-inspiring and an all-out dopamine rush.

Even when striped bass are in a feeding frenzy, they won’t always hit a plug. Stripers are often keyed in on a specific baitfish shape and profile, and they can be very particular and selective. Stripers are naturally curious and will often follow a lure or bait before striking. I’ve watched them follow and rush at a plug, pushing large amounts of water with their powerful tails, only to turn away at the last second. Many times, I’ll swap out the plug until I find one that draws a strike—only to find that the striper is foul-hooked.

Of course, sometimes stripers will miss a topwater plug because of its erratic side-to-side motion. Generally speaking though, they’re extremely accurate when it comes to striking their intended targets. Consider how quickly squid and mackerel maneuver, and how bass can pick them off with relative ease.

Recently I was watching a video of my On The Water co-workers hand-feeding fresh squid to striped bass at a dock. The fish were stacked up, swimming back and forth, aware of the fresh bait being dangled above their heads. Every 5 to 10 seconds, a bold bass would come up to the surface and take a swipe at the squid, sometimes connecting, but other times turning away in a defiant manner at the last moment.

Watching the footage, I could envision a striper getting foul-hooked. Stripers often turn away at the last second because they see something is awry with the bait or plug. In that instant when their body contorts and they shift their momentum in the opposite direction, we snag them on their head, gill plate, or in the meat of their body.

Look at 1:40-2:00 and you’ll see exactly what I mean about the momentum shift. Several times, a bass comes up and touches the squid with its mouth but decides it’s not in its best interest to eat the offering. There are also a couple of bass (1:50-to-1:58) that come up, flare their gills, begin to suck in water, but ultimately choose to dart away. That’s the type of behavior that could elicit a foul-hooked striper. Finally, at 2:00, a brave bass comes up and takes down the entire squid.

If a selective striped bass uses its head and body to deliberately nudge a bait that it is not convinced is safe to eat, that could easily lead to a foul-hooked fish.

I’ve had trips where the bass strike without hesitation, and at times they can be downright reckless. At those times, the plug is almost always snuggly secured in their mouth or down the throat, all but confirming their intentions.

However, there are also outings when nearly every single bass is foul-hooked on the head or gill plate. The most common experience I’ve had with snagged bass seems to be when they “nudge” a fishing lure, and most often, that lure is a darter.

The scenario where I’ve most often foul-hooked stripers is when I’m crawling a darter, barely moving it forward, so it is just slowly wagging in the current. It’s easy to imagine how such an action would not produce a quick “reaction strike”. Instead, the bass are slowly approaching the plug, which appears to be struggling to swim and not in danger of escaping, and bumping it with their snout or body. With ultra-sensitive braided line, that nudge feels like a slight “tick” during the retrieve. A quick hookset upon feeling that slight “tick” often results in a foul-hooked fish.

Have you had similar experiences with foul-hooked striped bass? Please let me know in the comments below.