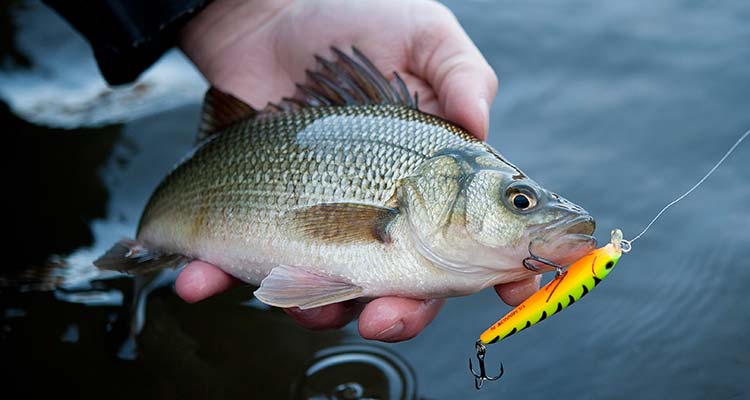 Though it may be a slow month for stripers, March is prime time for a striped bass relative—the white perch.

As badly as I may want to catch them after the long winter, the fact is, March striper fishing is hit or miss. New Jersey’s backwaters see a spike in the action, but the fish are short and the action is dependent on the whims of the fickle early-spring weather. Though it may be a slow month for stripers, March is prime time for a striped bass relative—the white perch.

Despite its name, the white perch is a member of the temperate bass family, Moronidae, like the striper. Take a good look at a white perch and you’ll see the family resemblance. Though white perch flourish in freshwater lakes and reservoirs, they evolved as a brackish-water species. They live in the upper reaches of bays and salt ponds, and in the tidal sections of rivers. Though they can be a bait-stealing nuisance to fishermen looking for the season’s first striper with seaworms or clams, in the early spring, white perch are a worthy target themselves.

Catching perch isn’t complicated. They’ll take hair jigs or soft plastics, inline spinners, and stickbaits. Fishing bait is also effective. Rig a size 4 baitholder hook below a 1/2-ounce sinker and bait up with grass shrimp, seaworms or even nightcrawlers if your local tackle shop isn’t stocking bloodworms or sandworms yet.

In cold water, white perch concentrate into large schools, so once you find them, the action can be fast and furious. Finding them, however, is not always easy. The schools constantly move throughout the estuaries, so a good place to start is looking in the same areas that hold early-season stripers.

Mud-bottom flats in the tidal portions of rivers or creeks are good places to check, as are any locations where fresh water enters the salt. In New England and on Long Island this could mean the mouths of herring runs. In New Jersey, the brackish areas of the Delaware, Great Egg Harbor, Mullica and Toms rivers have good populations of white perch.

Don’t be surprised if you hook into some stripers during your perch pursuit. Most of the bass mixing with the perch will be shorts, but the occasional monster could be mixed in as well, especially in New Jersey. I’ve heard a handful of stories about fishermen catching perch with light tackle, only to have a 40-pound-plus striper test their gear to the limit. It doesn’t happen often, but it does happen.

Some fishermen will note that the best part about fishing for white perch in brackish water is taking them home and eating them. Fillets from these panfish, breaded and fried, will keep you well fed and happy until the spring striper run begins.