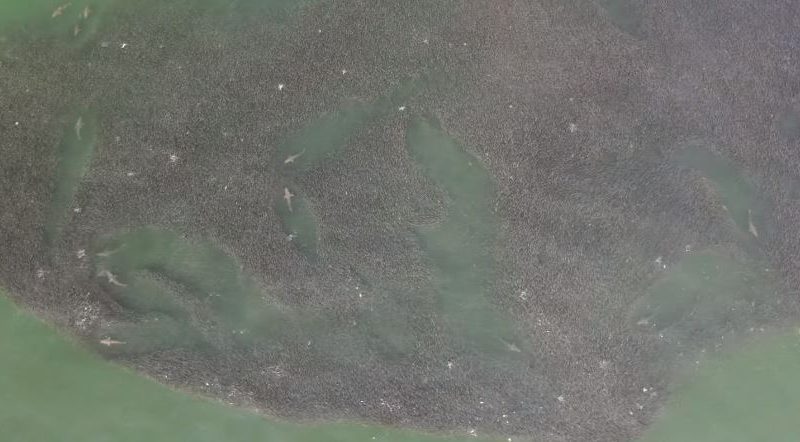 It’s been a very sharky summer off the South Shore of Long Island. Massive schools of bunker moved into the nearshore waters around the Hamptons a few weeks ago, and have attracted some of the ocean’s top predators, including a heck of a lot of sharks!

Much of this might have slipped by unnoticed if it weren’t for OTW Field Editor and drone photographer, Tim Regan, who has captured dramatic footage of the menhaden-fueled mayhem. His bird’s eye views of the carnage have given us a new and beautiful perspective of how important healthy menhaden populations are to the Northeast’s sharks and nearshore waters.

In this video, you can see at least a dozen sharks wallowing in the schools of bunker no more than 200 yards off the beach.

While the sharks in the above video look almost serene, as the bunker school parts for their passage, in this video, the sharks are in full feeding frenzy mode, tearing up the surface and putting the bunker on the run.

This video shows just how many bunker are out there, broken up into smaller schools, with some just outside the surf. It’s interesting how the dense schools of bunker kick up the sand and sediment as they move along.

You can see more of Tim’s videos by subscribing to his YouTube Channel, South Fork Salt.