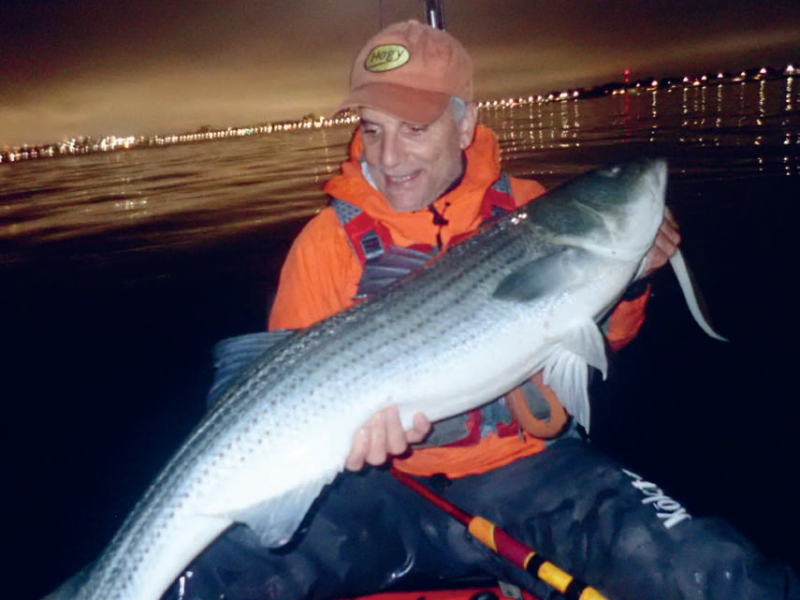 The author uses side-scan sonar to locate schools of stripers in shallow water, where they would be impossible to mark with regular sonar.

In the striper fishing world, just about everything is touted as a game-changer, but over the course of my 50 years of fishing, very few things have had a substantial impact on my ability to catch fish, though there are a couple.

Graphite rods, the evolution of soft plastics, and braided line have all changed the way I fish for stripers. My top-of-the-line gear from 30 years ago doesn’t get on the water much anymore because of advances in tackle have helped me land more fish and even changed the way I approach fishing. Side-scan sonar is the latest advancement that I consider a true game-changer.

The Evolution of Fishing Electronics

The evolution of fishing electronics has had a big impact on my ability to catch stripers. GPS maps show potential hot spots are and sonars have gone from printed scrolls and LCD screens to brightly colored TV screens. My first sonar units were LCDs. The pictures weren’t very detailed, but I could see structure, locate fishy spots, and identify fish. As technology improved, I upgraded to color units that had better target separation, more pixels, and provided a clearer picture of what was below. Over time, sonar units have become significantly less expensive, and the average boater can afford models that, 20 years ago, would have drained the bank account.

Side-scan sonar shows what’s below, like traditional sonar, but also what lies to the sides of a vessel. Since its inception more than 50 years ago, it was primarily used as a tool by oceanographers and the military. High-end fishing boats have also been using very expensive side-scanners for a few decades now, but over the last 10 years, the units have become affordable for the average boater and their quality has skyrocketed.

A few years back, I added a Humminbird unit to my kayak, and it opened my eyes to what I’d been missing. After years of using standard sonar, I was pretty adept at identifying structure edges and fish, but the high-quality images on the MEGA Side Imaging made it much easier to understand what was around me.

Mounting a Transducer on a Kayak

It does take some experience to read the screen well, but the learning curve is quick and there are plenty of online tools to help. The best advice is to buy a quality unit and do a clean install of the transducer so that it is level and can see on both sides of the boat. Side-scan transducers cannot be mounted inside the hull because they must be immersed to read out to the sides of the boat.

How to Read Side-Scan Sonar

I do most of my striper fishing at night, so my sight-fishing opportunities are few and far between. If fish are on top, I can see or hear them popping and, occasionally, I see schools pushing water as they swim right below the surface. But, with side-scan sonar, I can see in the water all around my boat. I typically scan a swath 120 to 150 feet wide as I cruise along, looking for fish.

Schools of stripers are easy to identify on the screen. It’s like a flashlight shining out to the sides of the boat, and fish will show up as bright streaks, leaving “shadows” on the bottom. The readings often have incredible detail, and you can see the fins on the fish and tell which direction they are moving. Shadows close to the fish marks mean that the fish are near the bottom; when the shadows are further away from the fish marks, it means the fish are suspended higher in the water column.

The imaging is very easy to read over flat, smooth bottom, such as beaches. In those locations, fish stand out and are easy to target. Reading the images is more difficult in rocky and weedy areas because the rocks and weeds will show brightly and cast shadows. The fish marks mix in with the shadows from other structure, so when working over these areas, I use both the side-scan and standard sonar. The regular sonar may find fish that I couldn’t identify in the rocks.

Before using side-scan sonar, I underestimated the size of the striper schools I was fishing over. Regular sonar showed a couple of fish on the screen as I passed over them, but the side-scan showed the full width of the school. There have been times when I marked just a couple of fish below the boat, but the sonar showed there were hundreds surrounding me. However, stripers can be amazingly picky. At times, I have sat in a crowd of boats with big schools of bass all around and no one was getting any bites. Side scanning sonar can get me in the right place, but that doesn’t always mean it is the right time!

Also, stripers are sometimes very spooky. They are usually on the move, and too much activity will cause them to vacate an area. There were many nights when I found fish on structure, but as soon as I caught one, the school moved off. They will occasionally return after things quiet down, though at other times, they just move on to their next spot. In my kayak, if I drift slowly through the fish, they will move slightly away from it. In areas where boaters are driving around, the fish are extra spooky, and I often find pods of fish away from groups of boats.

Side-scanning sonar images are very different when moving compared to drifting. While moving, the images are crisp and clear. You can set the scroll speed of the scan to match your boat speed, and the image definition will be quite good. The best images are produced at a relatively low speed – less than 5 miles per hour. When you stop and drift, the images may be a bit blurry, but the fish still stand out well. It’s a good idea to become proficient at reading your unit both when moving and drifting.

I have a few go-to strategies for fishing with side-scanning sonar. The most basic method is to cruise over structure, looking for schools of fish or something that might hold fish. Side-scan sonar is especially effective for investigating rip lines because it is easy to see breaks in the structure or find a particular rock with larger fish. I mark the best spots in the rips I fish, then move from mark to mark while searching for fish. Stripers often set up on the edge of structure, though they may not be in the rocks on a point; they may instead hang just off it in a sandy area. When you are working structure, make sure to look not only up in the structure but all around it. While searching, I’m usually trolling a plug or big soft plastic, which helps me find fish that don’t show up well on the sonar.

Beaches and channels are often overlooked areas for boaters. They typically lack a major structural element that attracts fish, so there are not obvious spots. However, every beach or channel has sandy depressions that stripers and bait prefer, especially at night. Side-scanning sonar works really well in very shallow water, where I have found many schools of big fish. Part of the reason I prefer a kayak to a boat is that I often fish in less than 3 feet of water, and I can get into areas where boats would run aground. Stripers show up very well against sandy bottoms, and big schools of bass are unmistakable—the challenge is finding them.

Slowly zig-zagging up and down a beach is a good way to look, and sooner or later, you will see some fish. Beach fish tend to spook more easily because they are often shallow and there’s no structure to hide in. If you move too fast along the beach, the fish will quickly disappear.

Piers and breakwalls are also good places to look. Side-scanning sonar can “look” under piers and show schools of fish that you would miss with regular sonar. Stripers often group along jetties and breakwalls, though they are sometimes at the end of the structure where there is current. Often, a school of relatively inactive fish will be hanging out along the side of the rock wall. It is easy to use the side-scan sonar to keep your distance and cast to the fish without spooking them.

While fishing at night, I often see very large schools and it seems like I should be hooking a fish on every cast, but they won’t touch a thing. These nights happen much more often than nights when they will eat anything. Some fishermen have success casting or trolling live eels through the inactive fish, but when the fish don’t bite, I double down on big plastics. My favorites are 13- and 14-inch Hogys. In water less than 8 feet, I slowly crank weightless plastics or plastic lures on half-ounce jigheads. “Low and slow” is my go-to retrieve, but sometimes I have to shock those turned-off fish into biting with a fast retrieve or even skipping a weightless bait across the surface.

When the fish are turned off, I stay with the school as long as I can. Eventually, they will hit that magic window when some of them are willing to feed. There is a time during every tide when the fish start to eat, and by staying with them, I will be in the right spot during that window.

Some nights, stripers float just under the surface; other nights, every school is moving away from the boat. There are many times when trolling doesn’t work nearly as well as drifting and casting. If you are marking nearby fish around but not catching on the troll, keep your distance and cast your baits around the fish.

Both day and night, side-scanning sonar is excellent for identifying schools of menhaden. “Pogies” form large, dense schools, and are hard to miss on side scan, even when you can’t see them milling on the surface. For those snagging bunker to use, side-scan sonar is invaluable for finding bait and showing whether there are stripers around them.

Kayak fishing with side-scan sonar has been a true game-changer for me. It has saved some nights when I couldn’t find fish until I happened to come across a school in a spot where I didn’t expect to see any. It is one of the most effective tools on the water, but there’s still no substitute for old-school methods of finding fish. Reading the water is still a critical tool since being able to figure out where the current is hitting structure will lead you to the spots to fish. I often smell the fish before I see them on the screen—following my nose and looking for slicks on the water puts me on some of the best fishing every year. Combining these fish-finding skills with side-scanning sonar will definitely help you catch more fish.