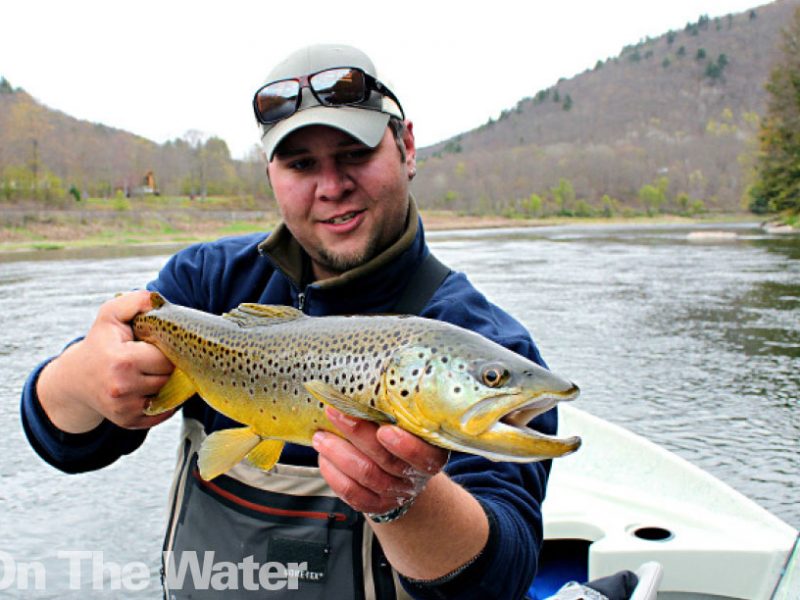 There’s usually one right in here,” said guide Joe DeMalderis as we drifted through a pocket of slick water on the Upper
Delaware River. I landed my streamer, a gnarl of tan and white rabbit fur, right next to the bank. After two strips, the baitfish imitation was clobbered, and within seconds, a big, angry brown trout erupted from the water and cartwheeled its way downriver ahead of the driftboat.

Delaware River brown trout, wild for generations, have adapted to the river, long ago replacing the washed-out look and lackluster fighting ability of hatchery-born trout with their fiery coloration and an attitude to match. My 21-inch brown trout finally hit the net about 100 yards downriver. The fish, more gold than brown, had the sleek lines of a sports car, a sharp jaw and a row of red speckles among its larger black spots.

I grew up in Philadelphia, minutes from the Delaware River, and while I caught stripers, smallmouth, catfish, carp and panfish from its waters, I never once targeted trout. To the north, around Callicoon, New York, the Delaware River changes character from a warm water fishery to prime trout habitat. Twenty-five miles upriver from Callicoon, the Delaware splits into the West and East branches around Hancock, New York. Both branches are fed from reservoirs, making the Upper Delaware a tailwater fishery. In the whole stretch, from Callicoon to Hancock and up the branches, wild brown and rainbow trout thrive in what Captain Joe DeMalderis of Cross Current Guide Service calls a “bug factory.”

I fished the Upper Delaware on two very different days last April, each showing me a different side of the river and the fishery.

While the Upper Delaware is well known for its excellent dry-fly fishing, my first day on the river was not a dry-fly day. Windy weather, snow squalls and unseasonably cold temperatures kept the bugs down, but made the fish receptive to larger offerings, like the weighted saltwater-sized streamers Demalderis had tied on the end of my leader as we packed up the boat.

With no flies hatching, the trout would be hugging the bottom, so in addition to the weighted streamer, DeMalderis had me fishing a sink tip as well. This would keep the streamer in the strike zone throughout the retrieve. To sling the heavy streamer and sink-tip combo, a 7-weight rod received the call of duty.

Along with the rich insect life in the Upper Delaware, there is also a buffet of baitfish species. According to DeMalderis, shiners, alewives, small eels and gizzard shad are all on the menu of the Upper Delaware trout. To imitate these baitfish, he goes with Zonkers and Wooly Buggers in white, black and root beer. Though the trout are quick to disprove any theories of which colors work best in which conditions, a general rule is that in stained water, dark colors work best, while in bright conditions, light colors draw more strikes.

We launched the driftboat on the main stem of the Delaware under thick cloud cover. Though it was nearly May, I wore two layers under my neoprene jacket and could still feel the chill. I took the forward casting position on the driftboat, while my friend Joe Cermele casted from the back of the boat. Demalderis manned the oars, slowing our drift downriver and sliding the boat into prime casting positions near some of the river’s fishiest runs.

We couldn’t have covered more than 150 yards of river when my line came tight. Before I could announce my hook-up, the fish was on the reel, taking drag. Any doubts I’d had about fishing a 7-weight for trout was erased as the 16-inch brown trout bent it to the cork. As I held up my first-ever wild brown trout for a couple quick photos, I couldn’t help but compare it to the stocked 16-inchers I’ d been catching throughout the spring. The river-born fish was on another plane. It was faster, stronger and had no problem going airborne.

Throughout the rest of the drift, every 15 to 20 minutes, one of us would turn a trout—either a follower, a short-striker or a solid hook-up. Though we could see the bottom throughout most of the drift, we couldn’t see the trout until they were in hot pursuit of the streamer. The final fish of the day, a big male brown trout materialized from the bottom and ambushed Cermele’s streamer right next to the boat. The colorful 21-inch trout bull-dogged in the current for several minutes before tiring enough to be brought to the net.

The following day, the clouds broke and the bugs were dancing by the time Cermele and I launched his Outcast Fish Cat, a two-man pontoon, on the East Branch. The emerging bugs had brought out the swallows, and the small, iridescent birds flitted just over the river, pointing to the densest concentrations of insects like gulls point to a bluefish blitz.

I had never fished dry flies before, at least not for more than a few experimental casts, and was about to be introduced to the challenges of catching trout on the surface. First, casting accuracy is essential. In the faster-moving water, trout would rise in the same spot over and over again, leaving a ring on the surface that would function as the casting target. “Matching the hatch” is also of great importance. While a streamer-charging brown trout isn’t going to scrutinize a big baitfish imitation being stripped along the bottom, a surface-sipping trout is going to look long and hard at a dry fly before eating — especially if there are lots of real flies on the water. DeMalderis stresses the importance of matching the size and silhouette of the hatching flies. Equally important is maintaining a natural, drag-free drift as the fly moves downriver.

The 8-pound test tippets we used when fishing the streamers would do us no good on the second day, and we swapped them for light tippets, thus creating another challenge – landing hard-fighting wild trout without breaking the spiderweb-thin leader material.

Challenges aside, watching a trout rise to your fly is the height of trout fishing—by some accounts, all of fishing — and there is no river in the Northeast with trout, especially large trout, as willing to come to the surface as those in the Upper Delaware.

Despite all the bug activity, it was nearly noon before we found rising trout. The fish were likely shaking off the previous day’s cold snap, and as the weather warmed, the trout began to eat, heavily. What started as a handful of rises at midday turned into a full-on feed by the time we reached our take-out at the slow-water section known as Lake Lenore.

A mixture of blue wing olives, caddis flies and march browns filled the air around us as we drifted downriver. When the trout have a variety of flies to choose from, DeMalderis has noticed the darker-colored ones are the first to be eaten, presumably because they are easier for the trout to see. Therefore, when selecting a pattern, DeMalderis opts to match the darker flies.

Cermele and I switched between large and small patterns, mimicking the larger march browns and the smaller blue wing olives. Cermele connected first, dropping his pattern into the feeding lane of an 18-inch brown that, after a spirited struggle, absconded with the barbless fly. Joe would hook up twice more before I had my first take.

I’d been watching one trout for a few minutes while Cermele got the raft into position. This fish was coming up every 30 seconds or so, swiping one of the small fluttering insects from the surface. My first few casts came up short, but once I smoothed out my casting stroke, I got the distance necessary to put the fly in front of the fish. I flipped a small mend into the line, and as I watched the fly drift, I knew the fish would eat.

When the fly moved into the trout’s established feeding zone, there was no deliberate take as I’d seen with Cermele’s fish. There was a flash and the water exploded as the trout took the fly and darted back to the cover. I set the hook with zeal and immediately parted the leader.

That was my only chance of the day, but as we approached the take out, a brown trout as long as my forearm gave my fly a painfully long look before rejecting it. The fish was so close to the fly that the elk hair of the caddis imitation must have been tickling its nose.