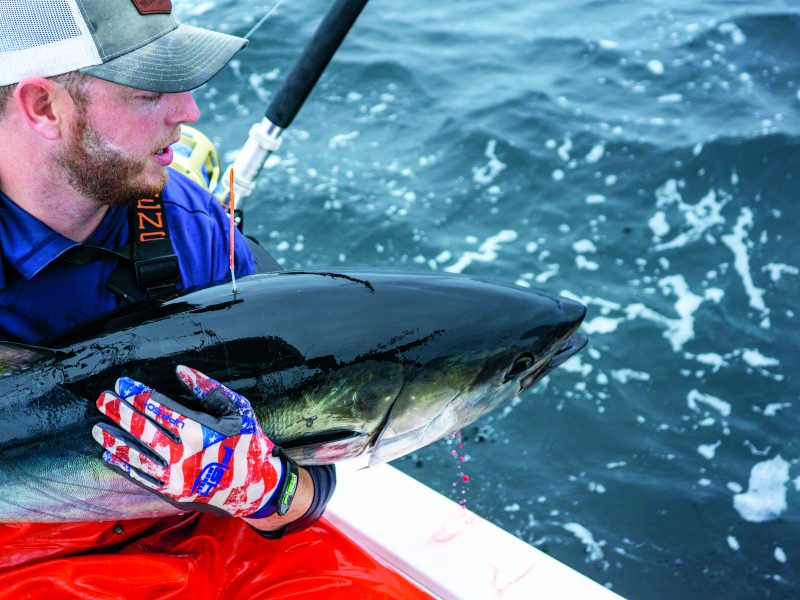 Tagging programs have shed new light on the migration patterns of adult bluefin tuna throughout the Atlantic, Gulf of Mexico, and the Mediterranean.

Bluefin tuna are one of the most sought-after gamefish in the world. Prior to the 1970s, the only value a bluefin tuna held was the trophy photograph of the angler and his big catch taken back at the dock. If the tuna was lucky, it was sold to a pet-food processor to be turned into dog and cat food. Giants that were not so fortunate were simply tossed into local landfills to rot.

Fast-forward 50 years and the first fish of the season in Japan is typically auctioned off at an exorbitantly high price (over $1 million), with one 612-pound fish going for $3 million in 2019. Although winning the auction is a sign of prestige and an advertising opportunity for the company that purchases the tuna, it is not a representative of what commercial bluefin tuna are sold for. However, it still reveals how much the view of bluefin tuna has changed.

Atlantic bluefin tuna are a highly migratory species that can be found throughout the Atlantic Ocean. On our side of the pond, they can be found from Labrador to northern Brazil and throughout the Gulf of Mexico. In the Eastern Atlantic, they range from Norway to the Canary Islands and into the Mediterranean Sea.

Traveling such great distances is not an easy feat for most fish, but bluefin are built for it. Shaped like a torpedo, it glides through the water column with ease. To further reduce drag, its eyes are flush to its body and it can retract its pectoral, pelvic, and first dorsal fins. Having minimal drag and an extremely muscular body, it only takes a couple thrusts of the tuna’s crescent-shaped tail to reach speeds of 20 mph.

In 1957, it was suggested that an area of the North Atlantic was a potential third spawning ground for bluefin tuna. This claim was based on longline surveys that found bluefin tuna in spawning condition, but there was no larval fish survey to confirm that these fish were in fact spawning. More than 50 years later, during the summer of 2013, biologists on a larval fish survey in the Slope Sea (an area of the ocean with northern boundary of the northeast United States’ Continental Shelf and the Gulf Stream as the southern boundary) collected a significant amount of bluefin tuna larvae and then replicated their catch again in 2016.

How to Tag a Tuna in 6 Steps

In a scientific paper published in The Proceedings of the National Academy of Sciences of the United States of America, a team of researchers stated that they found “unequivocal evidence that Atlantic Bluefin tuna spawn in the Slope Sea”. The Bluefin tuna larvae that had been collected were so young (6 days old) that it would have been impossible for them to drift from the Gulf of Mexico in that short of a timeline, meaning they could have been spawned only in the Slope Sea. Additional work with electronic tagging of adult tuna has shown that fish of mature age do not visit either of the accepted spawning areas during the spawning season. Could these fish be skipping a spawning season, or is it more likely that they are spawning in a different location such as the Slope Sea?

Advancements with electronic tagging, such as satellite and acoustic tags, has shed new light on the migration patterns of adult bluefin tuna throughout the Atlantic, Gulf of Mexico, and the Mediterranean. One key question that remains unanswered is, “How do juvenile bluefin tuna use this region?” To answer this, bluefin tuna researchers are asking for your help. In recent years, there have been excellent runs of school-sized bluefins within reach of many anglers. With tight restrictions, anglers are allowed to keep only two fish in this size class. After catching a quick limit, many anglers continue fishing and release any additional fish caught to fight another day. This is where recreational anglers come in. Instead of just playing catch and release, researchers are asking anglers to “Tag a Tiny” for science.

Started in 2006 by the Large Pelagics Research Center, Dr. Molly Lutcavage has led the Tag a Tiny cooperative tagging program after recognizing the need to identify migration paths and habitats of juvenile Atlantic bluefin tuna in the NW Atlantic. At the time, there were few, if any, tools for managers to estimate the abundance of juveniles accessed by the recreational fisheries. To date, nearly 2,400 bluefin tuna (mostly 1- to 4-year-old fish) have been tagged by Tag a Tiny volunteers and they have had many remarkable recaptures. On November 6, 2014, an 87-inch long Bluefin was caught south of Iceland. That fish had grown 21 inches since it was first tagged off Stellwagen Bank 1,920 days earlier. Another “tiny” measuring 46 inches that was tagged off Virginia spent 2,524 days at sea before being caught again when it weighed 617 pounds.