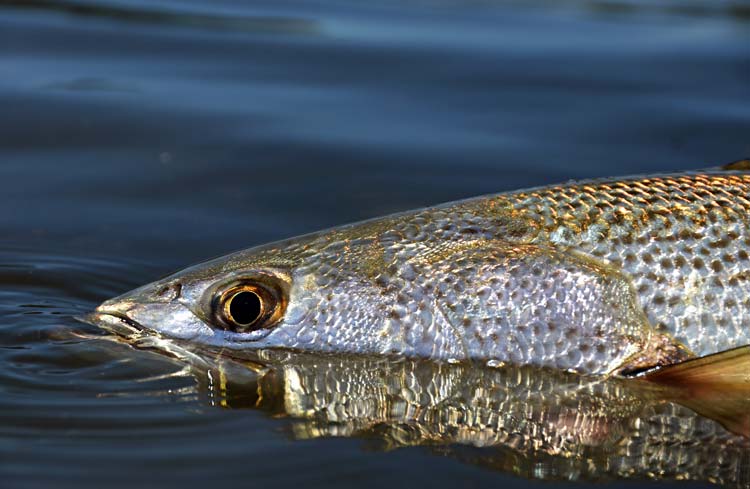 There’s something so entirely right about springtime fishing. The bay breezes are fresh, the sun burns off the morning haze and warms you to a comfort level, and for the first time of the year, a shot of incredibly beautiful fish run with the tides. May is the prime month to sneak out after the weakfish of your dreams.

Cynoscion regalis are quite possibly one of the most radiant game fish in Atlantic waters. Adorned with diamond sparkling hues of steeled silver, regal purple, muted yellow fins, effervescent light greens, and sporadic black spots, these fish are truly the treasures of the backwaters. Many a 1- to 6-pound weakfish has fallen to the savvy angler, but once a weakfish breaks the 10-pound mark, by unspoken understanding and agreement from most anglers, the fish then earn tiderunner status. Finding, nevermind hooking up with and boating, a true tiderunner is not an easy task, but it can be done. Here’s how you can target tiderunners this spring.

As the fifth month of the year rolls on in, weakfish are already on their spawn, and any fisherman knows that spawning fish are usually the largest of the species as they are loaded with eggs and fat from bulking up. Their spring spawning ritual takes them from now through the end of May and into June, and the weakies that are present aren’t the 1- to 3-pound “spikes” that infiltrate the backwaters in the summertime; these are the true tiderunners as big as 16 pounds – weakfish in a class all their own.

The first step to dialing these fish in is concentrating your efforts during the prime hours. That means hitting the predawn and dusk hours from around 5:00 a.m. until just after sunrise, and 6:00 p.m. until sunset. Nighttime hours can also be a very productive time for weakfishing. They can be spooked very easily, and once boat traffic starts up, or in the afternoon when the sun is high, they clam up and get lockjaw until sundown settles the bay waters once again.

Weakfish run with the tides, moving in and out and all around the backwaters, setting up shop around sedge points, underneath sod banks and deep in the channels to chase and suck down the baitfish and crustaceans that flow in and out with the tides. The largest of all weakfish move into the backwaters around the full and new moons as they prepare to release their eggs and spawn out. Weakfish are one of the few fish that actively feed as they are on the spawn.

I’ll be the first to tell you that catching a true tiderunner weakfish is no easy task. I’ve had my share of weakies in the 1- to 4-pound class, and have bagged a healthy number of weaks in the 4- to 8-pound range, but so far, I’ve only taken one weakfish larger than nine pounds (and barely at that). It’s not for lack of effort but simply that you need to be in the right place at the right time of year to target these fish. Plus you need a little bit of luck. The month of May and the first two weeks in June provide the Garden State angler his best shot at nailing down a record weakie.

Captain Rich “Swiss” Swisstack of Shore Catch Guide Service knows a little bit about catching big weakfish. In 2008, he guided angler Dave Alu to the IGFA all-tackle world record weakfish which tipped the scales at 19 pounds, 12 ounces! And he didn’t do it with finesse. Swiss terms his style of trophy weakfishing as “combat style.”

“In Raritan Bay in May, those big weaks are mixed right in with the bass and bluefish feeding on the bunker schools,” says Swisstack. “They absolutely love to feed on fresh bunker. I use a bunker head with 1 to 2 inches of meat left on behind the head for my prime bait. Chunking is the way to go, though you have to weed through the stripers and blues.”

Swisstack’s weakie-chunking setup is no joke. The rig starts with 65-pound-test braided line, 12 to 15 feet of 60- to 80-pound-test monofilament shock leader, one bead, a Duo-Lock snap clipped with a 2-ounce pyramid sinker, another bead, a 100-pound barrel swivel, a 16- to 18-inch, 80-pound-test fluorocarbon leader and a 9/0 Gamakatsu octopus hook on the business end of the rig.

“It seems like overkill, but it’s not,” Swisstack says. “It’s all how you play it out once it’s hooked. You can’t horse him like a bass or blue. The first run will be similar to a bass; long and sustained. Then, you’ll know it’s a big weakie after the run stops and you feel him shaking his head. It’s like a thump-thump-thump vibration on your line. This is when you either lose him or keep him on the hook. You have to ease up when he’s thumping it or the hook will pull through its paper-thin mouth. Keep a light drag and follow the fish up and down the beach. You have to control the fight or he’ll shake you off. A big weakfish will take 15 to 20 minutes to beach.” For chunking, experienced weakfish anglers swear by the period an hour before and after slack tide.

Large spiketooths are notoriously aggressive ambush predators. Enticing artificial lures, such as bucktails and fluttering plastics, can really agitate big weakfish. If you combine the two, you have the finest artificial offering ever for a large weakie. Plastics seem to work best in the back channels, as weaks lie down behind the humps and bumps of the channels sucking down the grass shrimp, mantis shrimp, spearing and rainfish as the baits drift out or in with the tide. Rips and swirling eddies created by incoming and outgoing tides funneling through channels and around points confuse baitfish schools and weakies hang in the turbulent waters to ambush the disoriented baitfish. Bucktails and soft-plastic baits perfectly mimic this type of disoriented baitfish.

Contrary to the hardcore, combat-style chunking, back-bay bucktailing is a finesse game. The key is to effectively mimic a larger baitfish that has lost its way and will make an easy meal. The most productive bucktail weights that allow for a natural presentation run from ¼ to ¾ ounces. Favored colors for weakfish are white, yellow-and-white, or chartreuse with a strand or two of Mylar flash tied in. These weights are good to work when fishing 5 to 20 feet of water, but bump up to a 1-ounce to 1½-ounce bucktail if working over 20-foot depths to allow it to get down and hold in the strike zone. Tip the bucktail with a 4- to 7-inch Fin-S Fish or a 4- to 6-inch mackerel or squid strip.

For some reason, the hot color for weakfish plastics always seems to be pink. Weakfish love the color, but if you don’t have it in stock, white or a light gray will also work. Lunker City makes Fin-S Fish in albino shad, bubblegum and rainbow trout patterns that work well. When targeting the large weakfish that are hunkered down near the bottom, work your offering low in the water column. When you drift over a hump, keep in mind that the weakfish will be hanging on the backside of it and the bucktail must be in the strike zone for them to grab it. Keep bouncing bottom with the bucktail, when you feel it go over the hump, drop it back a foot or two to allow it to sink into the strike zone where the weakfish is waiting.

A bump-twitch technique seems to work best according to Captain Al Crudele of the Bayhound in Sea Isle City. “I call it the ‘Sea Isle Dropback,’ Crudele says. Larger weakfish are hiding on the backside of that hump, so you always want to be in contact on or near the bottom once you go over the hump. The action of the dropback sparks an aggressive mindset in the weakfish as the bait flutters tantalizingly downward. Most times, weakfish will hit your bucktail on the drop. Twitch it with small, subtle jerks when it falls over, but don’t overdo it. Just make it twitch enough to get the weakfish interested, then he’ll inhale it in one motion.” Crudele concentrates on the predawn hours for his prime-time tiderunner fishing and has bucktailed his share of 8- to 12-pound weakfish.

If you can trick a weakie to bite a bucktail, that’s the first step, but once you hook up, the real challenge begins. Weakfish are also known as “papermouths” and for good reason. If your drag is set tight, or if you try to horse a large weakfish to the boat, you can expect a very short fight, as the hook will tear right through the weakfish’s thin mouth faster in an instant. Many inexperienced weakfishermen will set the hook hard and grind down like they’re bull-dogging a striper or bluefish, but this won’t work for weakies. What needs to be done once you feel the thump is to lift up with a moderate hookset, and once you feel him wriggling on the line, get that drag set loose, and expect him to pull out drag on you. Find the drag setting that allows him to take line when he needs it, and still allows you to gain ground. It’s a precise measurement, and you have to feel it out for yourself. If you think you’re drag is too light, go one notch lighter. It’s not the difficulty in hooking a 10-plus-pound weakfish that makes landing these fish so rare (although that’s not easy either). It’s the finesse battle that’s required to boat a big tiderunner that makes this species such a challenge.

For Jersey anglers, a myriad of backwater opportunities exist for those on the tiderunner hunt. Raritan Bay is the top spot for northern Jersey fishermen in areas such as Flynns Knoll and Romer Shoal. Central Jersey anglers will concentrate on the Barnegat Bay, at spots such as the Oyster Creek outflow, and between the BB and BI-Buoys. Southern Garden Staters will stick to the backwaters of Broad Creek in Absecon, Rainbow Channel in Ocean City and Ludlams Bay in Sea Isle City.

Nothing compares to the exhilaration of landing a true tiderunner, as you have to pull all your skill, finesse and technique together to make it a reality. You’ve got till early June to boat the biggest weakfish of your life. Enjoy it now, because it only comes around once a year.

I highly recommend releasing your tiderunner weakfish, as any weakfish larger than 8 pounds is most likely a breeder, holding millions of eggs to replenish future stocks. A quick snapshot and release will ensure the future of this phenomenal species of game fish. Try not to keep the fish out of the water for more than 30 seconds if possible. Save the smaller 1- to 3-pound spikes for the frying pan, as they are better eating anyway.

But for sheer thrill and challenge nothing compares to the exhilaration of landing a true tiderunner, as you have to pull all your skill, finesse and technique together to make it a reality. You’ve got till early June to boat the biggest weakfish of your life. Enjoy it now, because it only comes around once a year.