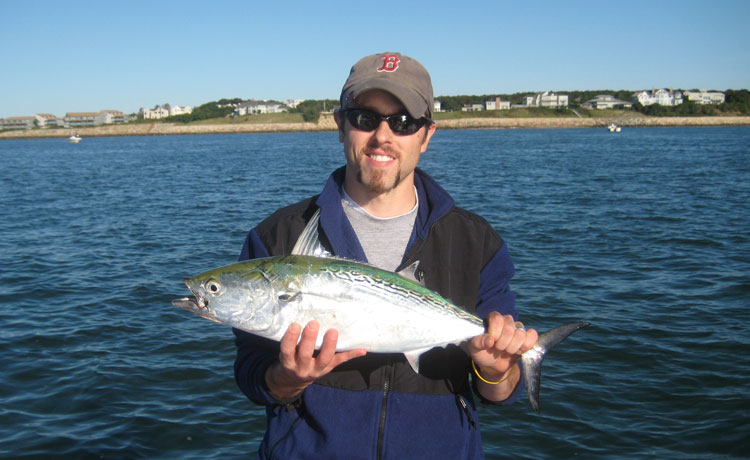 One early morning about ten years ago, I was fishing alongside my father just outside Waquoit Bay on the south side of Cape Cod, where groups of false albacore and bonito charging through baitfish on the surface had attracted a small fleet of fishing boats. When a boat drifted close by during a lull in the action, the angler on board kindly let us know that the breaking fish were false albacore, and therefore we should substitute our needlefish plugs for small, shiny lures. We smiled, nodded, and thanked the kind man for his help, but we kept the plugs on – and when the fish popped back up, we continued to enjoy catching and releasing albies on top.

Although metal lures such as Deadly Dicks and Swedish Pimples are staples for bonito and false albacore fishing in the Northeast, they aren’t the only options. Try throwing a topwater lure and be prepared for some tremendous strikes.

Make no mistake, metal lures, soft-plastic baits, swimming plugs and flies are all proven lures for catching false albacore, bonito, skipjacks and even small bluefin. However, when conditions allow, topwaters are my go-to lures for hardtails.

Fishing topwaters for funny fish is a great way to draw explosives strikes from even the pickiest fish. Selecting which plug to use is very simple. I like to use the same types of topwater lures used for striped bass fishing, which are needlefish, spooks, and pencil poppers. All of these lures will catch albies, bonito and small tunas in our waters.

My favorite lure for false albacore is the 5/8-ounce Spofford’s Needlefish in bone or pale green. The inventor of the lure, Martha’s Vineyard Striped Bass and Bluefish Derby Hall of Fame member and legendary bonito fisherman Arnold Spofford, crafted this lure with intentions of matching the baitfish, predominately sand eels and spearing, present around the island of Martha’s Vineyard. Mr. Spofford was on to something, as this slim-profile lure has resulted in some impressive albie and bonito catches since its creation.

The Spofford’s Needlefish is fishable right out of the package, however, I encourage removing the middle treble to limit injuries to the fish. The rear treble can also be replaced with a single 1/0 siwash hook. Even though the Spofford’s Needle uses old-fashioned hook hangers as opposed to through-wire construction, I ensure you that it can hold up to bonito and false albacore, and was even my go to lure a few years back when massive groups of school bluefin tuna invaded the waters off Rhode Island. Other needlefish, such as the Boone 5 ¼-inch model, are proven plugs for speedsters as well.

Although the Spofford’s Needlefish is generally my go-to plug, I have been experimenting with various other topwater lures, and have seen similar results. In addition to the needlefish, my topwater arsenal always includes a variety of Rebel Jumpin’ Minnows, Tattoo Walkin’ Sticks, Lonley Angler Slim Squids, and a 3/8-ounce pencil popper from Saltybugger. The Saltybugger pencil popper is a 3-inch lure that mimics small, fleeing bait perfectly.

There are a number of lures on the market now that look so realistic, you’ll do a double take in the tackle shop to make sure they aren’t the real thing. They are attractive, and albies and bonito are known for their fine eyesight, I don’t think these fancy finishes are totally necessary. Basic colors seem to work for funny fish. I prefer white or bone, yellow, and various shades of green. Pink will also produce, especially when the fish are feeding on small squid.

Matching the hatch can be important when targeting funny fish. For example, when sand eels and big spearing are present, a needlefish will often outfish other lures, while the Jumpin’ Minnow or other spook-style baits may shine when peanut bunker are the main entrée. Although it is often wise to match the most abundant bait in the area, I have also had success when using a lure that stands out from the baitfish. This past fall brought an abundance of bay anchovies to Vineyard Sound, and the albies were keyed in on these tiny baits. However, I found that they were still readily taking a needlefish that was far larger than the bay anchovies.

Part of the excitement of target in our waters, false albacore and bonito can be frustrating at times. Here one second, gone the next. Often times albies can be extremely picky, other times they will attack anything you throw at them. Remaining persistent is important for success with these tuna relatives.

I concentrate on areas that have produced in the past and/or that are holding baitfish. Inlets, such as Waquoit Bay in Falmouth, or Lake Tashmoo and Menemsha on Martha’s Vineyard, or the entrance to Great Salt Pond on Block Island, are popular locations that will usually yield results when funny fish are in the area. Even if the fish aren’t showing on top, try blind-casting topwaters in these areas. Be ready, because at any moment in the retrieve an albie or bonito can deliver a bone-jarring strike.

Topwater plugs will also work from shore. Many beach anglers use tin lures from shore to receive extra casting distance; however, both the Spofford’s Needlefish and Tattoo Walking Stick are excellent casting lures. These topwaters work extremely well in shallow water, and can cast just as well as tin lures as long as there isn’t an over-powering onshore wind.

Another excellent strategy is to target rip lines. The calm side of the rip can be an excellent place to cast topwater lures, because the water is usually clear of weed and debris. Little tunny prefer this clean, clear water, while the rougher side of a rip will often contain more bluefish than albies or bonito.

It’s important to experiment with your retrieve when trying to tempt a false albacore to strike. I often start with a moderate retrieve and impart a different action depending on the plug I am using. With needlefish plugs, I prefer a steady retrieve. I reel fast to keep the lure on the surface, while occasionally twitching the rod to impart a “fleeing bait” action. When fish aren’t responding to the needlefish, I’ll often switch to a walk-the-dog lure, such as the Jumpin’ Minnow. These spook-type baits can be retrieved at various speeds. Some days a very slow but dramatic side-to-side action will be all that draws strikes, while other days a quick retrieve with rapid, short side-to-side action will prevail.

Small pencil-popper-style lures, such as the Gibbs ½-ounce pencil popper, Lonely Angler Slim Squid, and Tattoo Walking Stick are very versatile albie lures. They can be retrieved erratically on the surface to create a great deal of commotion, or worked slowly with a deadly side-to-side action.

False albacore and bonito swim fast, and a fast retrieve will often draw strikes, but when the fishing gets slow, I’ll slow down my retrieve. One benefit of using a needlefish plug is that if you don’t retrieve it fast, it will sink. If the topwater strikes aren’t coming, I will let the plug sink a foot or two below the surface after the cast. Letting it sink and then starting a fast, twitching retrieve that makes the plug swim toward the surface will often attract strikes when an entirely topside retrieve will not. If that doesn’t work, you can always try fishing the lure sub-surface, retrieving it slowly with only a few twitches. Although not a topwater technique, it’s another way to be versatile when fishing this plug.

I let the fish dictate which retrieve is best. If one method of retrieve is yielding results, then I will stick with that until the action slows. Often a subtle change in retrieve can make a huge difference, so don’t to be stubborn. Experiment with different lures and retrieves and let the fish tell you what they want to see.

A basic 7-foot spinning rod from a quality manufacturer such as St. Croix, G-Loomis, Lamiglas or Shimano will handle tossing topwater plugs and fighting the fast-swimming, hard-fighting false albacore and bonito.

Although it is important to have a quality rod to battle these speedsters, a reel with a quality drag and ample line capacity is even more important. Even a small albie has the ability to strip line quickly. I can recommend the Quantam Cabo and Boca 40, or the Shimano Stradic and Spheros 4000. Choose a fishing line that you’re comfortable with, either a quality monofilament in the 10- to 14-pound-test range or braided line in the 15- to 30-pound-test range. When using monofilament, you can tie directly to the plug, as false albacore and bonito can be leader shy. If you choose to use braid, I would recommend a monofilament or fluorocarbon leader of 12- or 14-pound test connected directly to the braid using a uni-to-uni knot or a modified albright knot and avoiding the use of a swivel that may spook the fish.

If you’ve never used topwater lures for funny fish before, be persistent and you’ll quickly gain confidence in their fish-catching ability. If the fish are ignoring your offering, try switching up your retrieve before switching back to the old-standby lures. Eventually, you’ll be rewarded with an explosive topwater strike that will have you sold on topwaters.