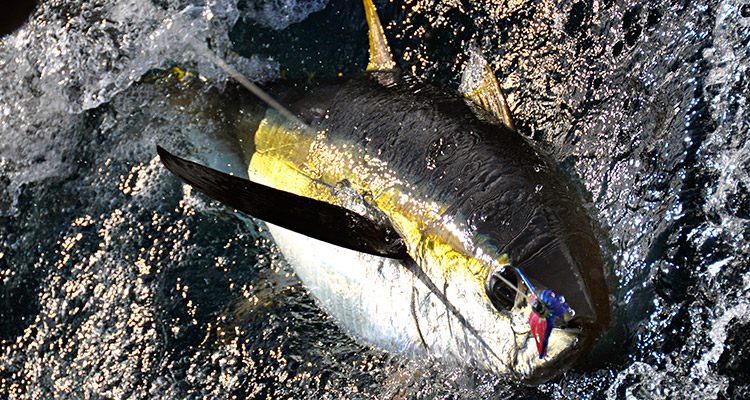 Fill your spread with these proven offshore fish catchers.

Offshore fishermen have a wide variety of trolling lures to choose from and only 6 to 11 positions in a trolling spread to use them. If you polled a hundred experienced captains and asked each for their 10 top-producing canyon lures, every list would be different, but a few lures would frequently be mentioned.
This is my list of the 10 lures that have proven themselves essential over my years of fishing in the northeast canyons.

Invented in the 1970s by Ed Martin, this simple bullet-style lure is one of the best producers of all time for multiple species. I am not aware of a boat fishing the Northeast blue water without at least a couple of Green Machines on board. The cone-shaped head made of clear acrylic set with green tri-beads and its green vinyl skirt makes pelagic fish go crazy. The Green Machine will draw ferocious strikes from all species of tuna, marlin and just about anything else that swims. Machines can be trolled at speeds from 3 to 9 knots and will be productive from any position, but are particularly effective fished on bars off the riggers and far back in shotgun position behind a bird. They can be rigged singly or in chains. While there are many imitations, none equal the original.

Also called the Hawaiian Eye, this iconic lure is found on just about every offshore boat. Usually fished in combination with ballyhoo, the Ilander catches everything that swims in the canyons. It can be fished by itself or with a strip bait, and trolled on the surface or off downriggers.
Ilanders come in three sizes – the Standard, Junior and Tracker. They are effective in any position and troll best at speeds between 5 and 8 knots. They can be fished singly or in chains, with or without a bird. They come in a huge variety of colors, with blue/white and purple/black being the best multi-species producers. A red/black or purple/black Ilander rigged on single-strand wire over a rubber skirt with an 8- to 10-ounce egg sinker and two-hook rig is deadly for wahoo when trolled at speeds of 10 to 12 knots. This setup is fished way behind the wash about 200 yards back. If a trolling weight is added ahead of the rig, it can be towed upward of 16 knots. 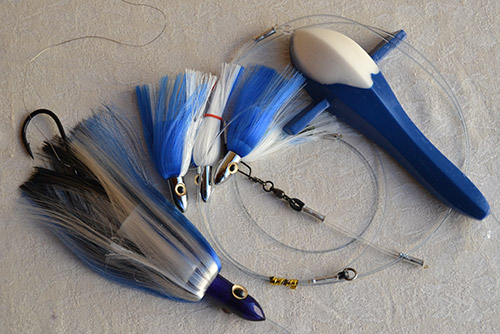 In my opinion, the Money Maker Chain is the best rig that can be pulled in the northeast canyons. This “lure” incorporates the aforementioned Ilanders into a daisy chain with a bird ahead of them and a larger skirted lure as a hook bait. I have had many trips when the single Money Maker in an 11-rod spread accounted for half the bites! And not just for tuna—the Money Maker Chain has drawn strikes from marlin and wahoo as well.
While there are several variations of this rig, the one I fish the most has a Marlin Magic bird rigged above three Ilander Juniors or Trackers in blue/white, with a blue/white Canyon Gear Hoo Machine and select ballyhoo taking up the rear. The Money Maker Chain does best trolled high off the short rigger, but it will be work in any position. If you are a gambling man, bet your crew members that this rod will get the next bite!

Though generally fished on spreader bars, these simple squid imitations are also effective trolled in chains and as single lures behind a bird. They attract all species of game fish, but are particularly effective on tuna.
Bulb squids come in a variety of sizes up to 17 inches or more, with the 9-inch size used most frequently in the canyons, though the best size to use depends on the size of the predominant baitfish. Bulb squids rigged in spreader bars are usually fished off the riggers at speeds of 4 to 8 knots. There are a few different squid types available, but the Carlson Fuku squid works extremely well in the canyons, especially in black, rainbow, glow and natural squid.

The simple flat-head plunger design of the Mold Craft Wide Range sends out just the right signal to draw in billfish from afar. The standard size is a favorite of white marlin – the soft rubber body must feel right to them when they whack it, unlike hard-nosed lures that can scare them away. When blue marlin is the target, the senior size in purple with a pink skirt is a favorite. In 2011, my good friend Keith caught three blue marlin in as many trips–including one close to 700 pounds–while trolling the Mold Craft Wide Range from a center console.

There is something about the Braid Bigeye Rocket that makes this the best bigeye lure of all time. I once caught four bigeye in three trips on this lure. Another time, I watched a nearby boat land three bigeye in one day, also on a Braid Bigeye Rocket. On each of these trips there were 11 lures in the water and the single Rocket being fished back off the corner got all the bites!
The Bigeye Rocket has a simple acrylic bullet-head design, but it swims straight and somehow sends out the perfect signal that draws the fish in like magnets. Yellowfin and other tuna species, as well as wahoo, will also strike this lure. The purple/blue, green/black and squid colors are the most productive, and trimming two inches off the skirt seems to make it even more effective.

This jet has an amazing ability to entice all species of tuna from bigeye to albacore. With its slanted head, it swims from side to side as it throws out a beautiful smoke trail. The small and medium sizes are fished most frequently in the canyons, and purple/black, green/ black, silver/blue and “evil” (turquoise/yellow/purple) are the most popular colors. The Canyon Runner won the 2012 White Marlin Open bigeye award using a green/black Cherry Jet.

A round, weighted head with built-in jet channels stabilize the Iland Sea Star and create a near-perfect bubble trail. This versatile lure is most often fished with a ballyhoo at speeds of 6 to 10 knots and is placed off the corners, on a long rigger or way back behind a bird. White marlin absolutely love this bait, especially in blue/white, pink/blue or blue/yellow. 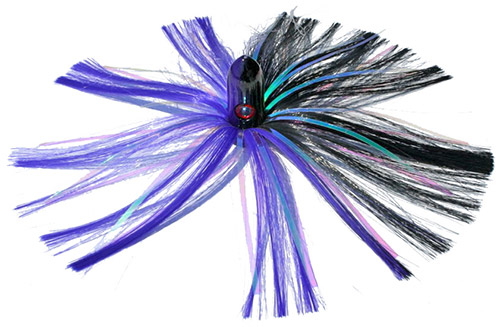 This weighted, nylon-hair-skirted lure is a bit like the Ilander, but it has earned its own spot in the trolling spreads of northeast captains thanks to its ability to raise bigeye, large yellowfin and wahoo. The weighted head keeps the Joe Shutes lure subsurface; when rigged with a select ballyhoo, it drives large tuna and wahoo crazy with desire. Best trolled about 8 knots, this lure works well off the long rigger or the corners, and can even be fished far back off the shotgun position. The 5-ounce Joe Shutes seems to be the most productive, but captains will sometimes switch to 3- or 8-ouncers depending on sea conditions and trolling speed.

From miniature mahi to massive marlin, the flat-faced weighted acrylic head and quality rubber skirt of the Munson Mahi catches anything you might come across in the canyons. Yellowfin especially love this lure, which comes in a variety of sizes and can be fished with or without ballyhoo. The small and medium sizes are tuna magnets, while the larger size attracts marlin and bigeye. Blue/silver, black/orange and green are favorites. They can be trolled between 6 and 9 knots off the corners, the long rigger or in the shotgun positions.