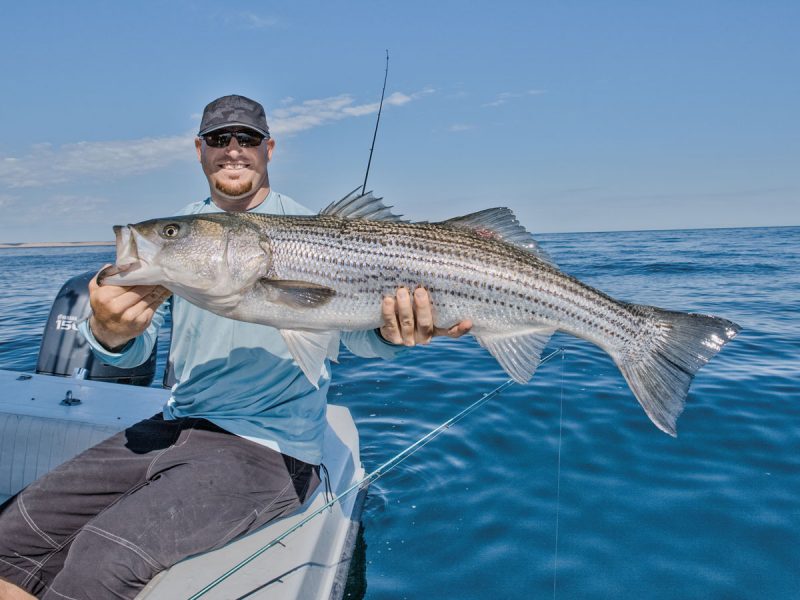 • See Where The Migration Is At This Week!

Every winter, anticipation builds for the arrival of migrating striped bass. Each year is different, and exact timing seems to be strongly influenced by water temperatures along the Atlantic coast.

By tracking fishing reports from charter captains, contributors, and readers at OnTheWater.com, we have been mapping the striped bass spring migration from the Mid-Atlantic to Maine since 2015. Each year has been very different and provided some interesting insight into the timing of the striper migration.

2015: A historically snowy and cold winter kept water temperatures cool well into the spring, delaying the striped bass migration and resulting in later arrivals than most fishermen could recall in recent history. Yet, by mid-June, big striped bass were reported from the Jersey Shore to southern Maine.

2016: A strong El Nino blessed the East Coast with a mild winter, and the migration got off to an early start. Big bass appeared in Raritan Bay by mid-April, and fresh schoolie stripers arrived early to New England. However, by June, the maps for 2015 and 2016 looked almost identical.

2017: Bitter cold weather in March delayed the striper spawn in the Chesapeake and slowed the start of the migration. In mid-May, big post-spawn bass showed up off northern New Jersey to chow down on bunker. Remarkably, schools of bass, including many fish over 30 pounds, arrived in Cape Cod waters earlier than usual, and it seemed as if large numbers of fish bypassed Long Island waters.

2018: Another cold spring delayed the striper spawn and had many anglers lamenting that the migration was running about two weeks behind schedule. While this meant a slow start in parts of Cape Cod and Massachusetts, it also meant a longer spring season for anglers in Western Long Island Sound and off Long Island’s South Shore.

We’re excited to find out, and invite you to follow along as we track the Striper Migration. You can help by contributing to our weekly map updates—simply share your striper fishing reports and photos through Instagram, Facebook, or at OnTheWater.com.

Striped bass are anadromous—they live their adult lives in the ocean but migrate into brackish bays and freshwater rivers to spawn. On the East Coast, there are three major spawning grounds: the tributaries of Chesapeake Bay, upper Delaware Bay/Delaware River, and the Hudson River in New York.

The timing of the arrival of larger striped bass, the 28-inch-plus spawning fish, depends on the timing of the spring spawn. Spawning takes place earliest in Chesapeake Bay, as striped bass move from their wintering grounds off North Carolina and Virginia into the Bay in mid-March. Spawning is slightly later in the Delaware River, taking place in early April, and a few weeks later in the Hudson River, typically mid- to late April.

Through tagging studies, scientists have found that individuals from different spawning stocks tend to exhibit different migration habits. The Chesapeake Bay spawning areas produce most coastal migratory striped bass (estimated 70-90%), and fish hatched in the Chesapeake Bay exhibit more extensive migrations. Those that hatch in the Hudson River generally do not migrate beyond Cape Cod, Massachusetts, to the north and Cape May, New Jersey, to the south. Every winter, anticipation builds for the arrival of migrating striped bass. Each year is different, and exact timing seems to be strongly influenced by water temperatures along the Atlantic coast.