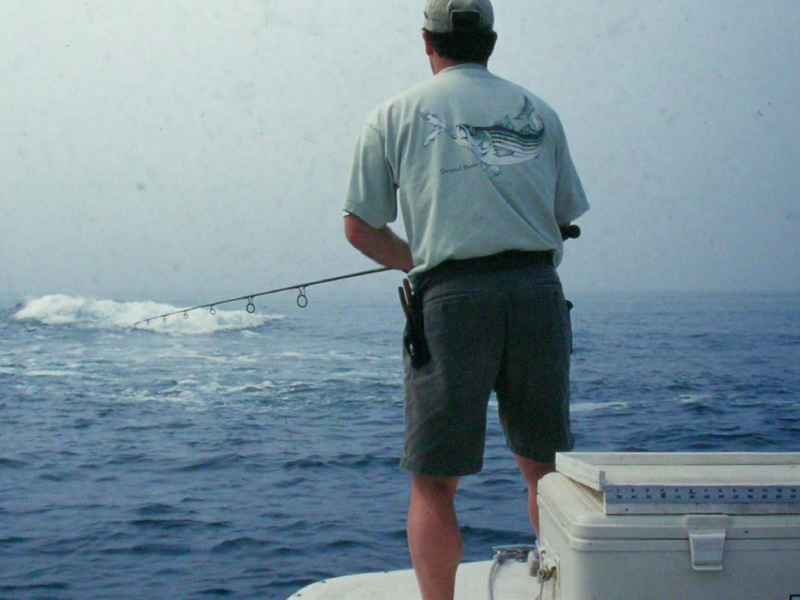 If a fish misses on the first cast, it can sometimes pay off to leave the spot, and return an hour or two later.

It was exactly 3:15 a.m. The luminous clock dial was mocking me; it seemed to know that, try as I might, I could not go back to sleep. It was a still mid-June morning, and with the truck hooked up to the boat, I could be fishing in about an hour. I decided on a solo tour of the precious pieces of habitat I kept close to my heart and off the radar. If I saw another boat heading my way, I left those places to fish later rather than give them up. As anyone who has invested time and effort to acquire prized pieces of bottom knows, these special places are worth sacrificing a short gain for the long term.

On the pre-dawn drive along that narrow, winding road, my expectations were always high, and the thrill of the unknown a pleasant distraction from whatever tasks I had been involved with. The challenge has always been locating, enticing, and hooking a striper. On most occasions, after numerous decades of working these waters, I didn’t decide where to begin the hunt until I arrived and factored in wind direction, wave action, and the stage and strength of the tide.

When I arrived that morning, I had the ramp to myself, and as soon as I lowered the truck’s window, I knew I was in the right place. Baitfish were being pursued right up onto the wrack line by hungry villains some refer to as cormorants, although I have other less-kindly names for them. The putrid odor of aged, salted bunker emanating from unsecured bait barrels on the lobster boats moored in the harbor invaded my nostrils. That stench was finally offset by the hospitable aroma of saltwater on the breath of a slight northwest breeze as soon as I broke free of the harbor.

My persistent problem, if you might consider it one, is my familiarity with so many places to fish, making it difficult to pick the right one to begin my day. No matter which I choose, I always suffer through the nagging doubt that I should have selected an alternate one. There’s nothing unusual about a fisherman second-guessing himself.

On most outings, just escaping the din and blare of a morning commute is compensation for leaving a comfortable bed and forsaking a few hours of sleep; a vigorous striper at the end of my line is the frosting on the cake. Well behind me are the early years when my objective was to catch every striper that frequented my area. I have gradually refined my methods to hunting quality fish for the challenge, and then trying to catch a slot fish (they are as rare as unicorns) for the table.

I approach every reef, wash, and boulder field with extreme caution, so as not to spook any fish in their ambush zones. That first cast into such cover is the most important. If I drop a plug atop an old dame’s head, she is gone, or at least suspicious, and will be off her feed for the rest of the morning. I make my approach as quietly as possible, with no noises, shadows, or, if accompanied, talking. I consider it a stalk rather than a drift.

I have come to understand that we usually get only one opportunity at these great fish with refined instincts, so I move quietly around and beyond those chosen lies. I present my lures from uptide, and then work them in the most natural fashion down toward the fish in the same manner as a big scup, menhaden, or lobster.

Bob Pond was the founder and creator of the Atom plug as well as Stripers Unlimited. I was privileged to serve on his board of directors and become a close friend. He loved striped bass and put his money where his heart was. For decades, every spring he traveled to striper spawning rivers to net and strip big fecund stripers of their eggs and mix them with the milt from younger males. Rather than allow the whims of fickle natural occurrence to determine the totality of the hatch, Stripers Unlimited raised tens of thousands of eggs to fry stage, giving the stripers a head start they would not have had in the wild, where millions of eggs never even hatch.

Bob was always willing to share his extensive knowledge of stripers and their basic instincts. One of those lessons was that from the earliest stages of their lives, stripers are wary of danger from above in the form of avian predators. It’s a vigilance never abandoned in their lifetimes and partially responsible for their preferences for moving in and feeding in the shallows under low-light conditions of pre-dawn and sunset.

On that morning, a zephyr of a west wind coinciding with an impending low-slack tide directed me to a favorite location, a deep bowl carved out by wind and tide directly behind a subterranean ledge whose purple shadow could only be seen on the lowest of tides. I swung wide to avoid creating a wake and came up well behind it so I could determine the path of my drift. The sun was just the promise of a distant glow on the overcast horizon behind me as I snapped on a large white Surf Asylum swimmer, its thick layer of bucktail on a 5/0 single hook sweetened with a dousing of bunker oil. With the engine in neutral, I sent a cast well beyond the ledges and began working it toward that hideout, twitching it like a wounded baitfish moving on the surface.

The plug approached the lie and was halfway to the boat when a large swirl appeared behind it. No matter how many such encounters I’ve experienced, the sight of a striper behind a wooden imposter sets my heart to racing and rouses my senses to full alert. I used every trick, twitch, pop, and gurgle at my command, but that fish was not buying it. When it saw the boat, it rolled, and its big caudal fin spanked a roil and disappeared. I knew the plug and my presentation were as close to perfection as I was capable of producing, so I decided that big striper was still digesting its last meal of a big lobster or a foot-long scup and had followed the lure out of curiosity rather than hunger.

I moved out and quietly worked my way to the next piece of select habitat. My first cast was still well short of the intended target when a hungry bass came at it from the side and crashed its bony jaws down onto the head and the forward treble.

At the set, the fish went wild, thrashing the surface, slapping its tail, and making several twists and rolls. The last roll caught the leader inside the gill plate, causing the fish to rattle its head like a tarpon and dive for the bottom. This was no heavyweight, though, and after a short tussle, I had it alongside, gripped the treble with my pliers, and twisted it free. The green fish slapped the boat with its tail and then moved off quickly toward deeper water.

After such a wild encounter, I started off to another location, far enough away so that any fish would not have been disturbed by the antics of that unruly striper. Anyone other than a regular companion might be shocked that I’d exit a spot where I raised two stripers in two casts. While many might not agree, my reasoning is actually very simple: years of beating the water to a froth after such violent battles, without a single response, has taught me to move away to another location and revisit that place later, after the fish has calmed down and moved back on station. The disturbance caused by the second fish would have sent signals of alarm to any other fish in the area.

Sometimes, I return to those locations at least an hour later and begin catching again. I have also taken three, four, and several more fish from the same boulder field and had others follow them to the boat. These were fish that were already on the feed. The hooked fish fought, but not in the extraordinary manner described above.

A not-so-relevant analogy would be two people in a park, 30 yards apart, each in the shade of a tree. All is calm and peaceful until one of them is seized by some unknown object and begins to flail, thrash, and react in panic. If you were the other person, would you wait around to see if a similar fate befell you?