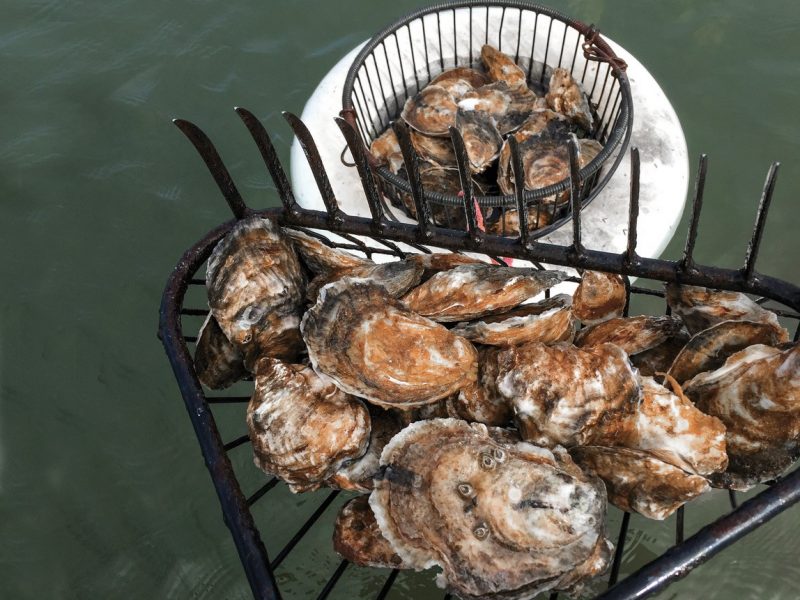 Last year, I probably harvested somewhere in the neighborhood of 600 to 700 oysters. My wife and I ate them just about every day for three months straight. It was a mollusk-eating marathon of epic proportions, and I am very much looking forward to doing it again this year.

But, it has been a long time since oysters were plentiful in our local bays.

If you stepped back in time 400 years, oysters were everywhere. Native Americans were quite fond of slurping them down, and they seemed to prefer eating big ones. Archaeologists studying mounds of discarded oyster shells (called “middens”) have found that the oysters were not only plentiful, they were much bigger than the ones we find today; some measured over a foot in length.

When European settlers arrived on our shores, they too were smitten with the oyster abundance. Oysters were popular in Europe at the time, so the settlers were familiar with them and recognized their importance. It is no coincidence that all the major port cities in the Northeast are located in areas that once supported vast oyster beds. (Some biologists estimate that New York Harbor once contained half of the world’s oysters.)

Up until the late 1800s, oysters were a common food for common people. Anyone could walk down to the shore and fill up a bucket.

According to Mark Kurlansky, who wrote a book on the history of oysters in New York City entitled The Big Oyster, “Before the 20th century, when people thought of New York, they thought of oysters. This is what New York was to the world—a great oceangoing port where people ate succulent local oysters. Visitors looked forward to trying them. New Yorkers ate them constantly. They also sold them by the millions. The combination of having reputably the best oysters in the world in what had become unarguably the greatest port in the world made New York City for an entire century the world’s oyster capital.”

From Boston to Philadelphia, oysters were by no means limited to upscale restaurants. Long before street vendors sold hot dogs, they were instead peddling raw oysters. While visiting New York in the 1790s, the Frenchman Moreau de St. Mery commented, “Americans have a passion for oysters, which they eat at all hours, even in the streets. The very poorest New Yorkers have no other subsistence other than oysters and bread.”

Unfortunately, all good things usually come to an end. Greed, pollution, and habitat destruction were just a few of the factors that led to the downfall of our wild oysters. In less than 100 years, what once seemed like an infinite supply had been so overfished that major cities like Boston and New York had to import their beloved oysters, which meant they commanded a higher price. In 1927, the last of the New York oyster beds closed after deadly outbreaks of typhoid and cholera were traced back to oysters from the harbor. They have remained closed ever since.

Soon after, the Great Depression set in. Wild oysters were now scarce and unaffordable to common folk. Pollution and habitat destruction continued to weaken the stocks, and the demise of the Northeast oysters was well underway. And, just when it looked like things couldn’t get worse, in the 1950s a devastating outbreak of two shellfish parasites, MSX and Dermo, decimated approximately 90 percent of the Northeast’s wild oysters.

I began harvesting oysters in the mid ‘90s. There were enough around to make them worth the effort, but it was a lot of work to get my limit. A few years later, the Northeast was hit with another round of the Dermo virus – a perfect storm for the destruction of our oyster beds. Two severely cold winters in a row took a toll on the last survivors. Many bays froze over, killing the oysters in shallow water, which is where most of them live. To make matters worse, there was also an outburst of oyster drills. These little whelks survive by drilling holes through an oyster’s shell and eating them alive. 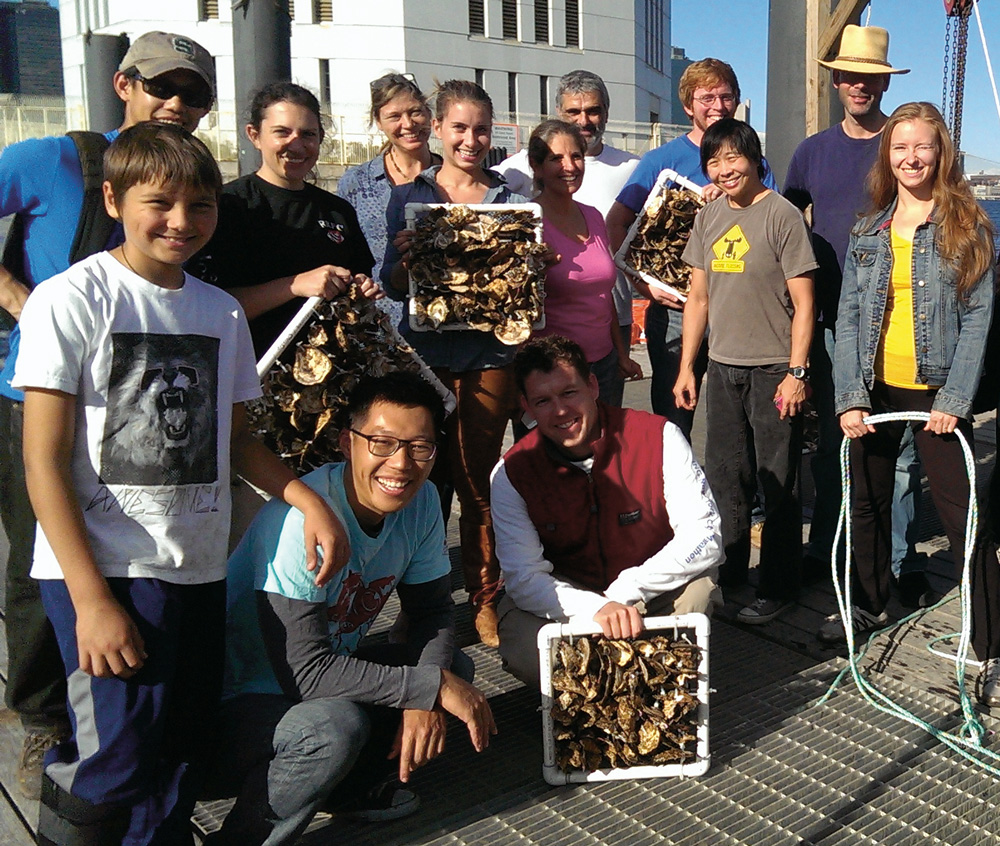 The Billion Oyster Project is a citizen science project coordinated by the New York Harbor School with the goal of restoring one billion live oysters to New York Harbor by 2035. The project grew out of the activities of students at the school who started growing and restoring oysters in New York Harbor in 2008. The project collects oyster shells from local restaurants and then uses them to build reefs throughout the harbor, which are then seeded with juvenile oysters. The project was inspired by the success of the Oyster Recovery Project in Chesapeake Bay, which has replanted more than 6.7 billion oysters on 2,200 acres of oyster reefs.

Oyster reefs are thought to have once covered more than 220,000 acres of the Hudson River estuary. Today, oysters are functionally extinct in the harbor as a result of overharvesting, dredging, and pollution. Restoring the oyster beds will improve water quality and provide habitat for other marine life. A $5 million grant has allowed the program to work with thousands of public-school students, who to date have recycled over a million pounds of oyster shells and planted over 28 million oysters.

By around the year 2000, the stocks were at an all-time low. If you were lucky, you might find four or five living oysters on a tide. In many areas, the oyster population was on the brink of collapse.

Around that time, researchers at Rutgers University (where they’ve been selectively breeding oysters since 1960) developed a strain of oysters resilient to viruses. They also refined a strain of triploid oysters, which have a third set of chromosomes and therefore cannot reproduce. Since triploids do not have to expend energy on reproduction, they grow much faster and have thicker shells. They can also be harvested in the summer months when natural, diploid oysters tend to get “spent,” meaning their meat deteriorates after spawning and they are not as good to eat.

This was a breakthrough for the burgeoning aquaculture industry. Farmers could now grow plump oysters quickly and harvest them year-round. Oyster farms began popping up like mushrooms, and farmers made great strides in fine-tuning their craft. Raw oysters once again became trendy and the demand increased for locally sourced seafood. In a short period of time, oyster farming has now become a flourishing industry in the Northeast.

Aside from being delicious, oysters also are perhaps nature’s most effective water filtration system. They have a remarkable ability to remove nitrogen from water as they filter-feed. This is a heroic feat, since excessive nitrogen triggers algal blooms that deplete the water’s oxygen and create dead zones. Many towns and municipalities are now using oysters to clean up local harbors and bays.

The town I live in began propagating oysters about seven years ago. Our local shellfish constable, Chuck Martinsen, worked closely with local farmers and studied their techniques. He was able to obtain some grant money and began farming them for the town with the help of a team of volunteers. The oysters begin their lives in the areas suffering the most from nitrogen overload, and they have indeed had a positive impact on water quality. After a year or so, they are transplanted to other nearby harbors with clean water. There, they continue to grow, go through a spawning cycle, and the area is opened for harvesting in the fall.

Gathering a peck of oysters now takes less than 20 minutes. The propagated areas are so fertile that a single sweep of a clam rake can produce over a dozen legal-sized oysters, and things should only get better. The transplanted oysters are reproducing naturally in their newfound homes, and I hope we may once again see wild oyster beds flourish.

Eating oysters raw, while they are still alive, is somewhat of a primal act. It’s food in its purest form. During oyster season, I eat at least six raw oysters every day. “Come and get your daily oysters!” is a common phrase yelled out in my household. A crack of black pepper, a small dash of cocktail sauce, slurp it down…. so good! 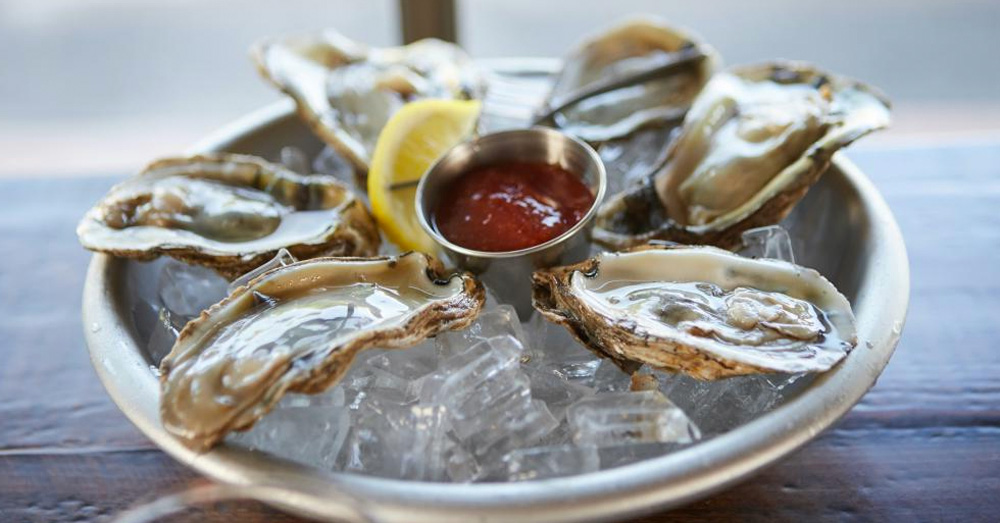 Mix all ingredients well and refrigerate. Note that I like my cocktail sauce with a kick. If you’re not a fan of heat, reduce the amount of horseradish and omit the hot sauce. 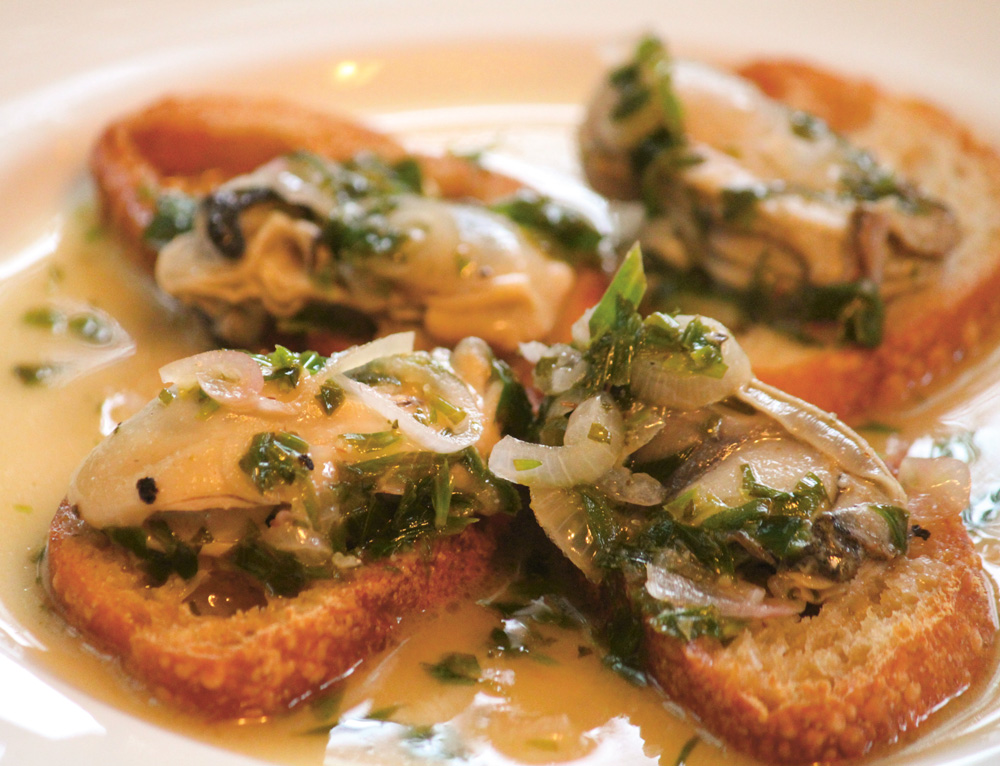 The following recipe was shared with me several years ago by Dave Ryan. Dave runs several oyster farms on Cape Cod and is a wealth of knowledge on growing them. This is one of my favorite all-time oyster recipes. Oysters and tarragon are a match made in heaven!

Cut 12 slices, about ½-inch thick, from the bread. Brush with olive oil, then toast in the oven for about 10 minutes at 350 degrees to make crostini. In a large frying pan, melt the butter, add the shallot, and sauté for about 2 minutes. Add the wine and then reduce by half over medium heat. Add the tarragon and the shucked oysters, and sauté for about two to three minutes, until the oysters are just cooked through. Add the oyster liquor and remove from heat. Place the crostini on a serving platter or in individual bowls and top each one with an oyster. Liberally ladle the remaining juice on top and serve. This is an amazing dish that can convert an oyster hater into an oyster lover.

This is an interesting take on Oysters Rockefeller that I found on the Cypress Grove website. Based in northern California, Cypress Grove is well known for their world-class goat’s milk cheeses and their Humboldt Fog is one of my favorites. I made this recipe for the first time last year. It was so good that I made it four nights in a row. Dynamite!

Shuck oysters and loosen from the shell. Sauté spinach with pancetta, garlic, pepper, and cream. Place 1 teaspoon of spinach mixture on top of each oyster. Top with goat cheese and broil until brown and bubbly. Serve with hot sauce. 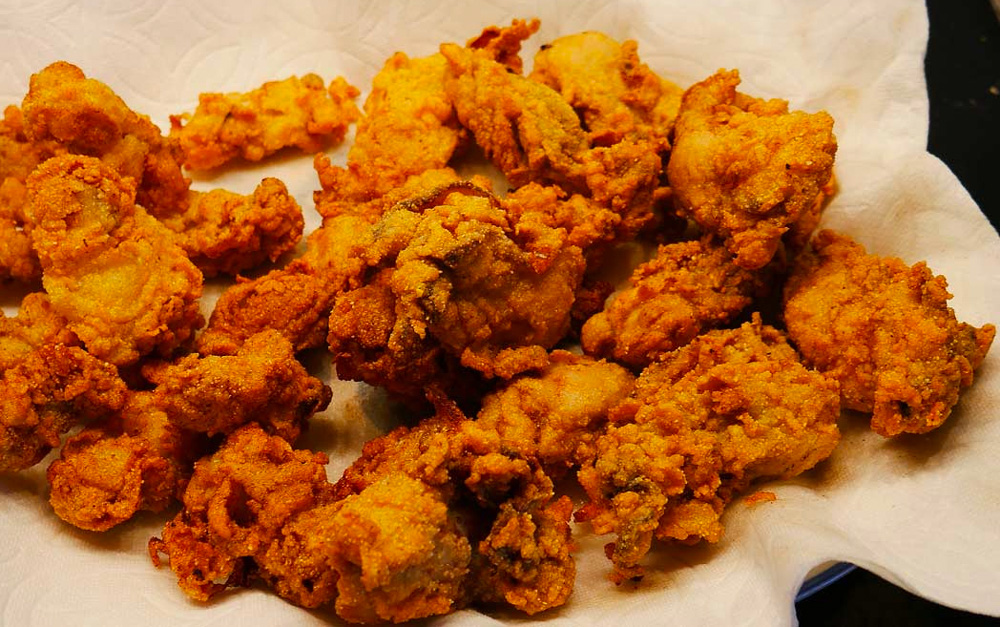 If you enjoy fried clams and you have never eaten a fried oyster, be prepared for a major treat. Fried oysters, I believe, are far superior to fried clams, both in texture and taste.

Drain the oysters and place them in a bowl, then cover with buttermilk and let soak for 30 minutes. Whisk together evaporated milk, water, cayenne, and eggs. Put the flour, cornmeal, black pepper, and salt into a paper bag, close it, and shake to mix.

Heat at least 3 inches of oil in a deep fryer to 360 degrees.

Drain the oysters from the milk and dip them in small batches in the egg mixture, then place in the paper bag. Close, and give them a shake, rattle, and roll. Remove to a plate and repeat with the rest of the oysters. Fry them in batches of about a dozen or so, and do not overcrowd! Fry, turning once, until golden brown, about 3 minutes. Remove to a paper towel and dust with salt. Repeat with remaining oysters.

Serve with lemon wedges, tartar sauce, aioli, or a remoulade.

If you really want to knock it out of the park, use your fried oysters to make a killer po’ boy sandwich (or sliders.) Split a fresh bun, coat with spicy remoulade sauce, add a piece or two of lettuce, top with fried oysters. Amazing!