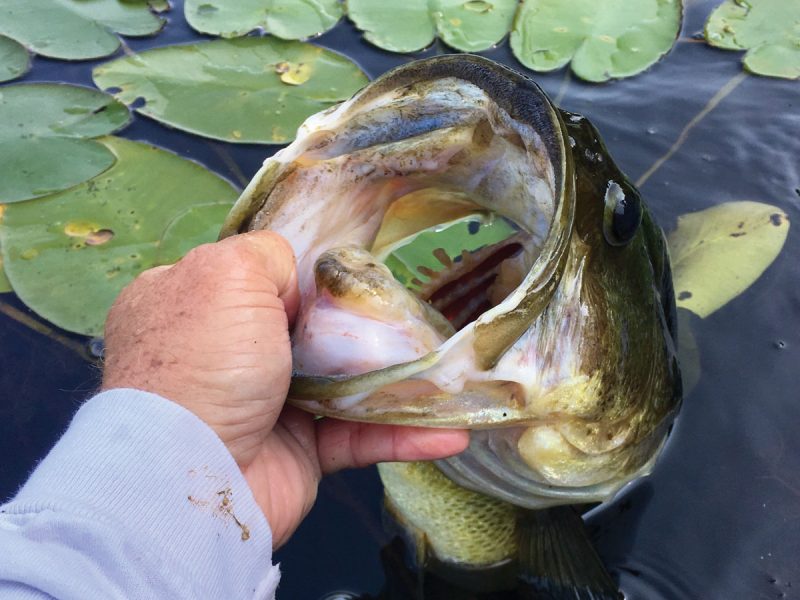 I grasped the northern largemouth by its lower jaw as the fish’s bulk stretched across the entire beam of the kayak. It had been decades since I’d caught a bass of this caliber from the remote puddle of a pond nestled in the Long Island Pine Barrens. As improbable as the first big bass might have been back in 1980, this current “lunker” was much more implausible 38 years later. But there I was, holding fast with two hands to 23½ inches and 7 pounds, 14 ounces of magnificent northern black bass. Like its predecessor, this fish was a perfect specimen. Its body was devoid of imperfections, and its coloration an ideal balance of both vibrant and muted tones, more like a realism-school painting than a living lifeform. The large head and gaping maw underscored the bucket-mouth moniker often used to describe the species. The thought immediately struck me that some of life’s greatest gifts come from the most unanticipated sources and those blessings often occur when least expected … so it was with this largemouth bass.

The journey to this time and place began almost 40 years ago. A friend and I had been asked by a biologist for Region 1 of the New York State Department of Environmental Conservation to conduct a pickerel catch survey of a pond. Bob and I agreed to it, but we were also forewarned that the pond was not known to contain any bass, so our focus should be on the pickerel population. Nonetheless, the appeal of exploring a generally inaccessible body of water (and one that received minimal angling pressure) was motivation enough, regardless of the variety of fish we caught. After being further briefed by the biologist and receiving our catch logs, we planned our first foray to the pond. Bob was well aware of this pond since a friend of his had dragged a canoe through the woods several times to reach it and was rewarded on each trip with several large chain pickerel. However, we had official authorization to lock the hubs on my ’78 Chevy Blazer and drive the off-road fire lanes to a makeshift dirt launch.

During the first few hours of fishing at this isolated pond, we caught and released 18 sizeable pickerel. All the fish were dutifully recorded into our logbooks before we were given the first sign of things to come. The next fish was a big surprise—a healthy bass that registered an even 6 pounds; not bad for a pond that was believed to contain no bass. Once that fish was released, we resumed fishing, and the magic continued. By the end of the day, we caught and released six exceptional bass from 5¾ pounds to a 9-pound, 2-ounce northern leviathan. No other bass of that class has since made its way to the end of my fishing line, and over the years, the memory of its capture and release has provided many moments of reflection and mental escape.

My time on that pond was limited. Not long after our fishing trip, I moved to New Jersey to follow my corporate career. Left behind were many beloved fishing and outdoor connections, none of which were more significant than that small pond and its hidden bass. 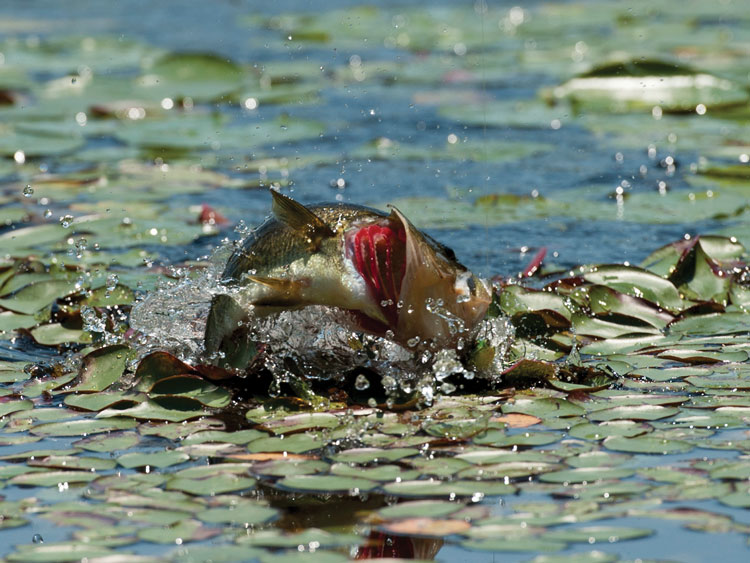 I had been back on Long Island for almost 18 years. Being preoccupied with saltwater fly-fishing and other outdoor endeavors, I neglected to revisit the pond. Though that big bass had always been on my mind, a return engagement eluded me. But on this day, I had an overwhelming urge to return. It was one of those magnetic pulls that could not be denied. The kayak was secured to the roof racks, tackle and gear were loaded into the truck, and I headed off.

Riding those dirt lanes brought back a flood of old memories and pleasant emotions, and seeing that dirt launch made me feel like I was a kid again. In short order, I was back on that hallowed pond, casting among the long-lost but immediately familiar surroundings.
Easing the kayak in and out of dense lily pads, I dropped an artificial plastic into all likely-looking open pockets of water. A couple of small bass obliged, prompting me to wonder if they might be the progeny of that big bass of long ago. The thought gave me a sense of continuity and a connection to the past. It was a good feeling.

As I silently maneuvered the kayak around a bend in the shoreline, I once again felt that unmistakable magnetic pull. There before me was a perfect piece of bass habitat—a field of lily pads with a wide opening. With the kayak positioned for optimum coverage of the area, I made my first cast. That was all it took. No sooner had the plastic bait hit its mark and began to sink, I felt the telltale tap-tap. Line moved off across the opening in the pads, and as the hook was set, the bass headed toward open water. That was a fortunate move for me and a mistake by the bass because if it had reversed course and gone into the dense tangle of cover, I would have most likely lost it.

After an intense contest of give and take (and a bit of heavy breathing), the big bass was draped across the full beam of the kayak with much of its mass resting on my legs. I could hardly believe what had just happened. That fish had bridged a 38-year time span and reunited me with a time and place that had been permanently etched on my mind. It was if I had never left – like seeing old friends after a long absence and picking up right where we left off. I eased my new friend back into the water and gave thanks for the unanticipated encounter. Yet, as ecstatic as I felt, an odd and apprehensive premonition overtook me. Was this fish a gift meant to ease some forthcoming misfortune? 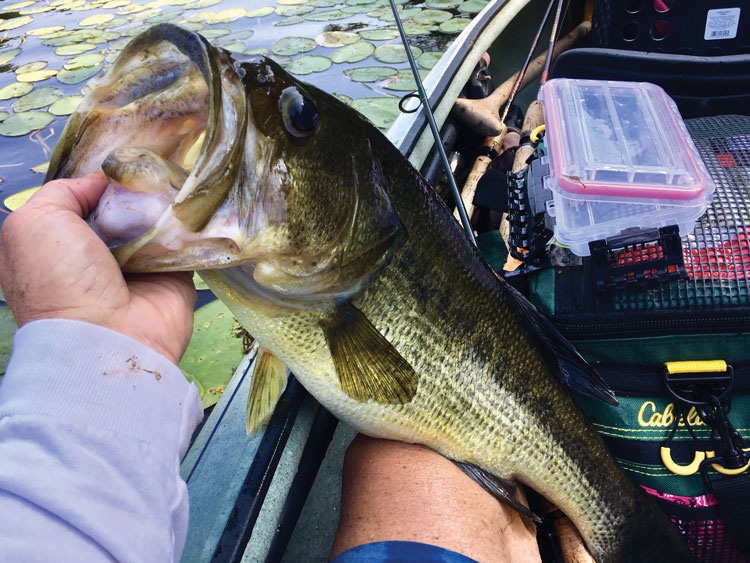 Lying in the hospital bed, I pondered my fate. How did I get here, with several life-threatening conditions. Over the course of my two-week hospital stay, two of my three maladies would be successfully treated, but the third, remaining issue would alter my life. It was to become a chronic condition, incidentally discovered, that would shape my future. With plenty of time to contemplate the new hand I’d been dealt, my thoughts often drifted to more pleasant times, if for no other reason than to escape a negativity that could consume me. I found myself rewinding the memory tape back to the previous week and catching that big bass. The fish was both a remarkable trophy and an omen of things to come. The mixed psychic signals I experienced at the time of its capture were unquestionably prophetic. After much reflection, I was convinced that the fish was indeed sent as a gift to help alleviate the distress of my current circumstances. If for nothing else, fishing or merely thinking about fishing, has always been a mental diversion for me, as it is for many anglers, a coping mechanism to help ease the tensions and anxieties that come with navigating through life’s challenges.

Angling can help heal the body and soul, and stimulates the spirit. With each physical or cerebral cast, there is anticipation that success will overcome failure and triumph will prevail over defeat. Fishing gives us hope and the wherewithal to pursue and persist. Fishing teaches us to prevail and rise above obstacles.  Like the big bass that entered my life as a surprise gift, such experiences help mend that which is broken.