If you look at all the large, soft-plastic stickbaits on the market, you’ll notice the same basic design—a long, skinny, tapered body with a wide, flat back and a thinner rounded underside. Some have pockets on the underside to make them easier to rig weedless, while others are solid and somewhat better suited for jigheads and hard casts on heavy tackle. Something else that most soft-plastic stickbaits have in common is what they lack—a big, lifelike eye. 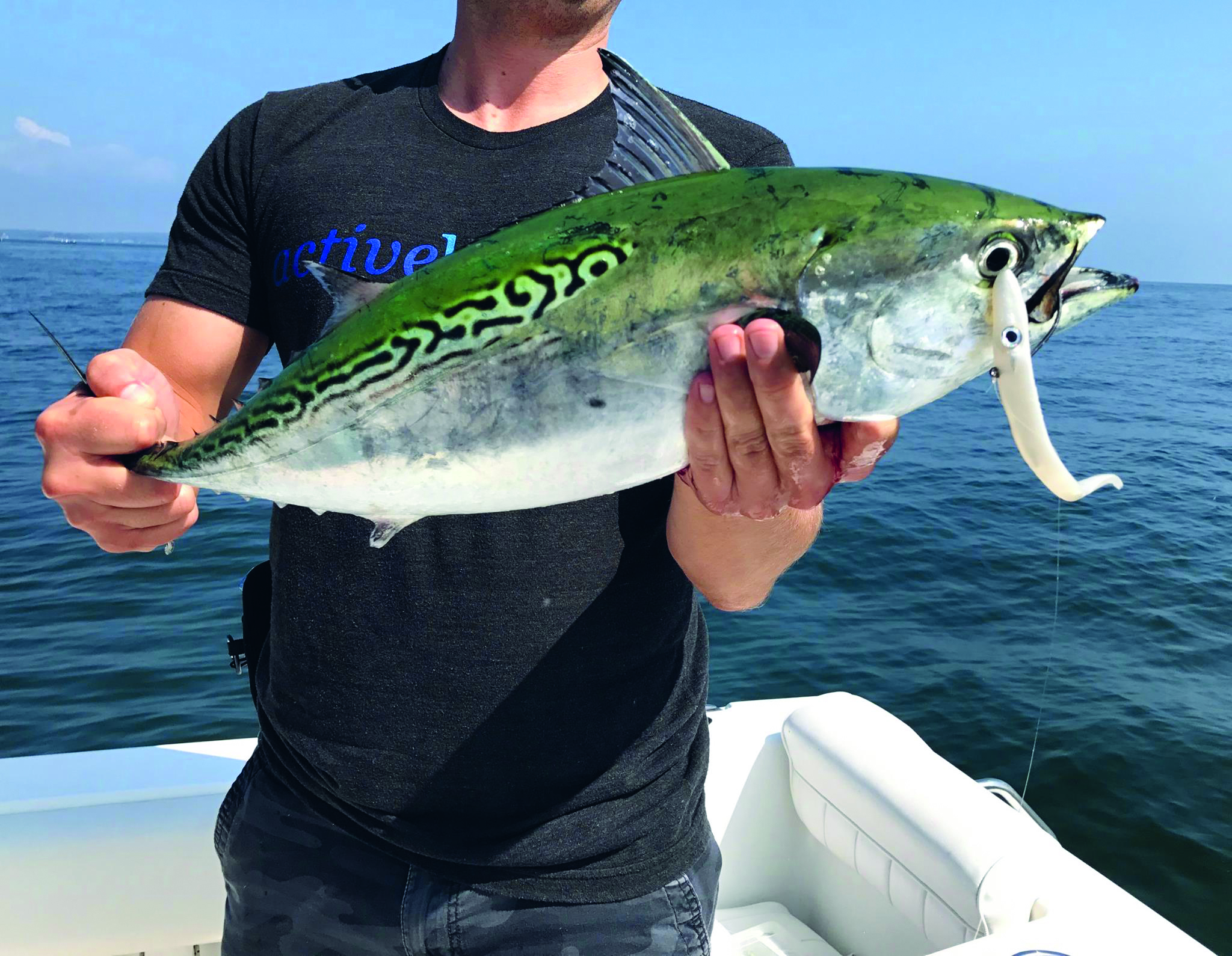 Underwater predators hone in on the eyes of their prey when they attack. This is so well established that some species, like the red drum, have evolved false eyespots near their tails. When a shark or other predator lunges for the wrong “eye,” the drum has a better chance of escape.

Dan and Mike Orefice, owners of Game On Lures, understood this, and named their version of the stickbait Big Occhi, the Italian word for eye. The Big Occhi has a large, prismatic eye for game fish like stripers to lock in on.

The lure is very angular compared to other stickbaits. The V-shape is designed to keep the bait level and help it slice through the water. This creates more side-to-side, walk-the-dog action than up-and-down jigging action. The thin tail whips wildly on an erratic retrieve, and when rigged weightless, the bait stays near the surface, generating violent topwater strikes.

The Big Occhi is available in a 7- and a 10-inch size, in striper-favorite colors including black-and-purple, pearl white, bubblegum pink, and natural eel. The eyes, Dan said, are glued in, and are durable enough to survive multiple strikes from striped bass.

The solid, thick body of the Big Occhi provides enough weight—1.3 ounces on the 10-inch, almost 1⁄2-ounce on the 7-inch—for long casts when rigged weightless. Dan recommends fishing the lure on a big swimbait hook with a spring-lock bait keeper.

Dan said a slower, deliberate retrieve works best, since it allows the bait to walk the dog just below the surface. He had success last fall ripping the 7-inch bait past albies, but for stripers, a slower, erratic retrieve worked better.

The Orefice brothers began Game On Lures in 2015. Based in Enfield, Connecticut, Game On offers a variety of freshwater and saltwater lures including hard-plastic jerkbaits, metal jigs, and articulated swimmers. The Big Occhi is their first soft-plastic offering, and Dan said that the company will be going in that direction, offering more in the way of original soft lures designed specifically for the Northeast’s most popular game fish.