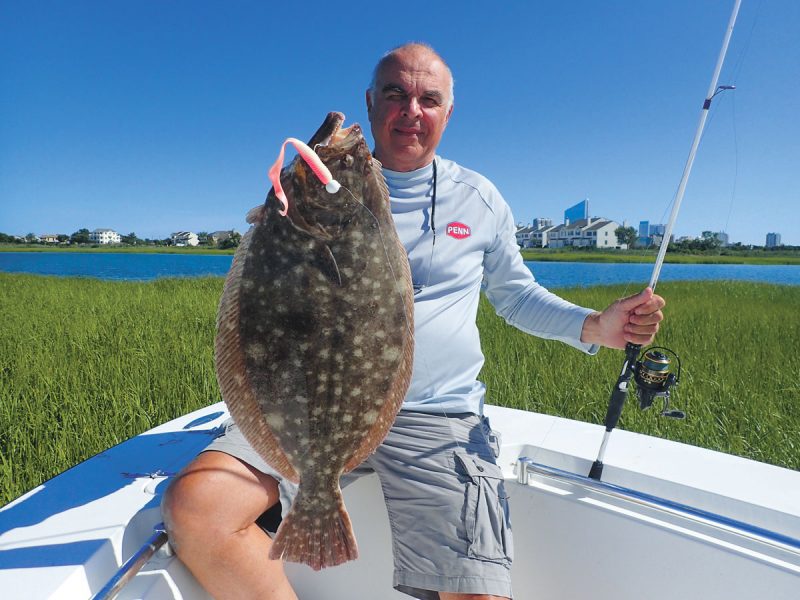 Pictured above: Les Newhall used a pink shine Gulp on a jighead to fool this 9-pound flounder.

My charter of four had been hammering fluke of all sizes at an artificial reef during an August afternoon in 2016. White Marathon Growling Bucktails with glow Berkley Gulp were working for everyone onboard. Then, out of nowhere, the bite stopped. Had we caught all the fish in that stretch? No chance. Had the drift, current or tide changed, shutting down the bite? The GPS and human tools of observation didn’t indicate so. Did the fluke swim elsewhere on the reef? Perhaps. Did the fish simply get full? Maybe. Looking for answers, we changed from white bucktails to chartreuse jigs with chartreuse Gulp. Instantly, the fluke bite kicked back into high gear and the crew filled its limit of solid-sized fluke.

On that outing, deductive reasoning points to the fluke responding to the change of color in our presentation. The action immediately returned when only the color was altered, thus illustrating that a summer flounder’s color preference can switch while feeding. We continued to use bucktails of the same size and weight; therefore, that part of the equation remained constant.

Discussion regarding fluke fishing and the color of the rigs, jigs, bucktails, and bait has been taking place for decades. Each angler has his own belief as to what color works best when. Hypotheses and theories make choosing which hue to send to the sand fun and challenging at the same time.

Half a century has gone by since simple red-and-white bucktails were the primary option at every tackle shop. Companies like Berkley and Spro rode a wave of momentum in the 1990s into the 2000s with their “jazzed-up” colors with equally interesting names. Berkley Gulp’s “nuclear chicken” and “new penny” colors were in high demand when they first hit the fluke scene in the Northeast. Spro’s “crazy bus” bucktail color was another hot-ticket item, along with their brightly colored paint and hair patterns.

Captain Jeff Viamari runs Bad Influence Charters based in Massachusetts and Rhode Island, and devotes many of his summer trips to fishing shifty ocean sands such as the Nantucket Shoals. “I wouldn’t leave the dock without pink, white, or chartreuse bucktails,” Captain Jeff professed. “I am a firm believer in these colors, and I always like to add a Gulp grub with the same color pattern to add to the effectiveness.” These colors probably rank in the upper echelon for many fluke anglers up and down the Eastern Seaboard due to their sustained success in drawing bites. Perhaps they are the “safest” colors to send to the bottom.

Capt. Jeff continued, “I like to match my colors to the baitfish that are in the area during the summer. We have squid, sand eels, and small scup, so we use we use pink, white, glow, and blue to match these prevalent baitfish.”

Mike Sisto runs Jersey Key Charters out of the Atlantic Highlands and focuses his fluke fishing in Raritan Bay and on offshore ocean structure. “If I had to choose three bucktail colors, they would definitely be white/glow, chartreuse, and orange. The orange is not a common color, and I’d never thought about using it until a client of mine wound up outproducing everyone on a trip, catching his limit, including a fish topping seven pounds.”

As for matching the hatch, Captain Mike’s clients have success with a variety of colors, but he generally finds himself using white. “I’m a huge fan of white! I use a whole squid on a white bucktail when we fish Ambrose Channel and the squid are present. The biggest fluke of the day comes from this setup quite often.” When Captain Mike is hammering the Shrewsbury Rocks, he sticks with white or glow bucktails paired with a contrasting pink Gulp. “We’ve had pink Gulp Squidos out at the Rocks, and the color combination really worked well on the fluke.” he said.

Captain Mike commented, “Many times in the spring we are fishing the outgoing tide, and the water clarity is not the best. Under those conditions, the productive lure is a chartreuse bucktail topped with a four-inch swimming mullet in glow or chartreuse,” he continued, “On cloudy-water days in the ocean, I’ll fish chartreuse six-inch grubs. On those days, we will also top off the bucktail with a whole squid or large strip bait.” A little touch of natural color always helps.

Captain Jeff had similar thoughts of colors for dirty water. “If the water is off-colored from a storm, I find that bright green, orange, or even glow can put more fish in the box. These colors are boosted by an additional soft-plastic bait, rubber squid, or even a combination of beads. The brighter the better!”

“I am a firm believer in trial and error when it comes to colors,” Jeff said. “Don’t get in the habit of using the same colors every time out, even if they are proven! Pay attention to the other colors people are using and see how successful they are. Or, ask your local lure maker to create a new combination or, for example, add something like a red streak in the bucktail.”

Captain Jeff came full circle when talking about choosing colors based on the environment and habitat being fished. “When it comes to colors around structure, match your colors to the type of prey prevalent in the area. For example, when fishing around mussel or clam beds, try a crab-colored teaser; if you are fishing sandy bottom, try to get a color pattern that best matches a sea robin or small fluke.”

I can personally attest to fluke regularly feeding on sea robins up to up to eight inches, since I’ve frequently found them regurgitated by some of the largest fluke I’ve ever caught. Furthermore, I’ve cleaned fluke with bellies full of wreck-dwellers like baby tog, bergall and sea bass so using colors displayed by those species is logical.

The owner of S & S Bucktails, Stan Gola, pointed out the same thing about sea robin patterns in an entirely different conversation. “Our sea robin bucktails were, by far, the best-producing bucktail for anglers last year. The feedback was outstanding.”

S & S Bucktails is based out of New Jersey and has a dedicated following among fluke fishermen up and down the Eastern Seaboard. Stan talks to everyone from professional guides to tackle shop owners who weigh in the big ones on a daily basis. This intel keeps his finger on the pulse of the fluke world and makes him an authority on what’s working on the water. Stan stated, “Most guys in the early season are fishing the backwaters. I find the most popular and effective colors are standard white, chartreuse/white, and pink/white. But when the water is really clean, some guys like the spearing pattern a lot.” Blending different-colored hair within the same bucktail isn’t new in the industry, but lure companies like S & S are taking it to another level. “On or near a full moon and as the water warms, a crab or shrimp pattern, along with the sea robin, seems to produce better than others.

“I find that in deeper water, anglers prefer glow bucktails,” Stan said. “Last year, our pink shine glow was the hottest color, but the year before it was our glowing sea robin.”

“As for dirty water, the more visible the better. Anything with glow will work, but remember this: colors change as the water gets deeper,” Stan said. “For instance, after forty feet down, chartreuse turns yellow and pink turns to orange at the same depth. Needless to say, sometimes it’s all about changing things up until you find the hot color.”

“Flash” or tinsel added to bucktails provides a wrinkle in the fluke game. “I find that using silver can be good when there are a lot of sand eels around,” Captain Viamari said. “However, I use silver only on a bucktail or a slide. I try to stay away from ‘jewelry’ such as spinners because they tend to attract dogfish.”

Captain Mike concurred that some of his clients have done well when using bucktails with flash. “I’ve seen the tinsel work well. I remember a few times when a regular client used it and caught more keepers than the rest of the charter.”

I also keep some silver glitz in my arsenal. In fact, I always have a Tsunami glass minnow ready to use in shallow water in the back bays, or I tie on a teaser and lace it with a small Gulp when fishing deep – it has silver flash built into the hair. Jigs with a holographic finish can also give anglers that edge in certain scenarios.