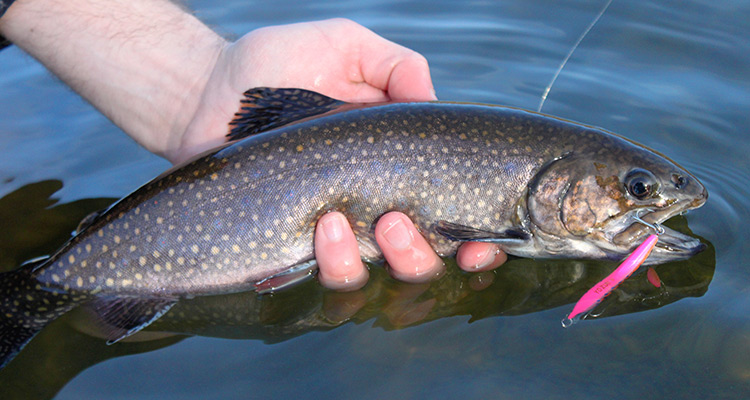 How would you like to fish a river that provides 60-plus miles of varied habitats and hosts an even more impressive list of fish species? From swift trout riffles, deep holes, long runs, and warmwater ponds, this river has options for both fly- and spin-fishermen to catch bass, pickerel, trout, walleye, and catfish. Sound like a place you’d like to visit? Then look no further than the Ashuelot River in southwestern New Hampshire.

For hundreds of years, communities relied on the Ashuelot River to produce power for textile manufacturing and wood plants. Some locals can still remember when the color of the river changed with what the local mills were manufacturing. According to the New Hampshire Department of Environmental Services, 12 Native American historical sites have been found along the Ashuelot River, including the oldest known evidence of humans in New Hampshire dating back 10,500 years.

The Ashuelot River has played an important role in the restoration of anadromous fish to the Connecticut River Basin. Three dams between Swanzey and Hinsdale have been removed in the past 15 years to allow anadromous fish access to historical spawning habitat and provide resident fish species with easy upstream and downstream movement. Until the Atlantic Salmon Restoration Program ended in 2012, an average of 121,000 salmon fry was stocked into the Ashuelot Watershed each year. The river continues to be an important focus area for American shad and American eel, and the river was listed as a Designated River in 1993, and has been recognized by the U.S. Fish and Wildlife Service as one of the four most important areas for the dwarf wedge mussel, a federally endangered species.

It’s no surprise that trout are the most popular species in the Ashuelot. Each year, the New Hampshire Fish and Game Department stocks almost 10,000 rainbow and brown trout into the Ashuelot. Approximately 4,000 of each species are stocked upstream of Surry Mountain Lake in the towns of Marlow, Gilsum, and Surry. Downstream of Surry Mountain Lake, a total of 900 of each species are stocked in the towns of Swanzey and Winchester. Additionally, the South Branch of the Ashuelot receives 2,500 brown trout each year in the towns of Troy and Swanzey, and contains a fly-fishing-only section that holds fish well into the fall.

Occasionally, I have caught wild brookies in the main stem during spring, but warm water temperatures tend to keep them from using most of the main river. Although the section of river between Butterfield Pond and Ashuelot Pond is not stocked with trout, I have heard of wild brook trout being caught in this area.

Sections along Washington Pond Road and below the Village Pond in Marlow are good places to hit for stocked trout, as are areas along Route 10 in Marlow and Gilsum.

The section between Route 10 in Gilsum and Route 12A in Surry is a must for early-season trout anglers. The river parallels the road for quite a length between these two larger routes. Locals call it “River Road”, but the real name is Surry Road or Gilsum Road, depending on which town you are in at the time. There are plenty of riffles and runs to fish, and a really nice bend pool where Gilsum Road meets Route 12A. Dort Road off Route 12A in Surry gives anglers access to some nice water as well.

Once the river enters Surry Mountain Lake, trout fishing doesn’t pick up again until the general area of Coombs Bridge in Swanzey. This location gets a limited number of browns and is a slow moving piece of water, best suited for kayak or canoe fishing. The location of the former dam in the center of Winchester can provide some fast action soon after stocking.

Fishing gets good again in the riffles and runs on either side of the Ashuelot Covered Bridge along Route 119 in the Village of Ashuelot. Sections between the two upper dams on Route 119 and below the lower of these two dams can provide some excellent opportunities for trout. Riffles, runs, and some deep pools provide great trout habitat and are loaded with aquatic insects, minnows, and crayfish. Be careful, as the water is dark with large boulders that are easy to slip on. This is a great spot for fly-anglers and a good location to find holdover trout.

The section below the Fiske Mill Dam in the center of Hinsdale to the confluence with the Connecticut River is the mostly likely spot to find big brown trout. The farther downstream you go, the more prevalent deep water becomes. I once saw two anglers in this stretch catch a 5- and a 7-pound brown trout within an hour.

The lower river was never stocked with trout until a local angler named Roger Blair approached me in 2002 with the idea of making this section a great trout fishery. After a number of discussions, a trip or two to examine the habitat and forage base, and a summer of water temperature data, I agreed to give stocking there a try. Blair kept an angler diary in 2003 and 2004 that showed great results and holdover trout present the year after the initial stocking. Even though it receives fewer trout than locations above Surry Mountain Lake, I believe the lower river gives anglers the best chance for larger holdover trout.

May and Butterfield Ponds, located in Pillsbury State Park in the town of Washington, are relatively shallow, with a total area of about 150 acres. Boat traffic is usually minimal and although pickerel and hornpout are present, most anglers pursue largemouth bass there.

Ashuelot Pond (aka Washington Pond) in the town of Washington is popular with area bass anglers. A gravel ramp with parking for four trailers provides access to this 368-acre water body. With an average depth of 8 feet and a maximum depth of 26 feet, the lake offers varied habitats with abundant aquatic vegetation most years. Species of interest include largemouth bass, pickerel, yellow perch, hornpout, and sunfish. This pond is also popular with ice anglers.

Surry Mountain Lake in Surry is a 350-acre impoundment created for flood control in 1941 by the U.S. Army Corps of Engineers. It is relatively shallow, with an average depth of 5 feet and a maximum depth of 14 feet. A boat launch and swimming area are available for a nominal fee, as are campsites. Despite its prevalence of shallow water, I have seen pictures of several largemouth bass caught there that topped 6 pounds. Pickerel, black crappie, and big bluegill can all be found here and a popular winter fishery exists. The place is loaded with stunted yellow perch, so firetiger lure patterns are a good choice.

Fishing for warmwater species below Surry Mountain Lake is hit or miss until you reach the lower river in Winchester. That being said, the area right below the Colony Mill Dam on West Street in Keene can sometimes be good for pickerel and sunfish, and I have caught smallmouth bass and some massive fallfish in the Westport Rapids sections in Swanzey.

Some fast smallmouth bass action can be had between the two upper dams on Route 119 in Winchester and below the lower of these two dams. I’ve never caught anything over 14 inches in that section, but the bass are a lot of fun on a light spinning or fly rod. Inline spinners or small spinnerbaits are a good lure choice, as are Muddler Minnows and bead-head Wooly Buggers for fly anglers.

Depending on time of year, the section from the Fiske Mill Dam in Hinsdale to the confluence with the Connecticut River can be great for smallmouth bass and walleye, with the occasional largemouth thrown in for good measure. Do your homework on this section because some areas can be fished from shore, some by wading, and others only by boat. The mouth of the Ashuelot River, in particular, is a great location for walleye and smallmouth bass in spring, and for channel catfish in summer.

Jerkbaits, spinnerbaits, jigs tipped with curly tail grubs, and crankbaits have all served me well in this section. Last May, the Ashuelot was running high and muddy after a quick rainstorm, and I caught a spawned-out 19-inch walleye and a 15-inch brown trout on consecutive casts with a Rapala Husky Jerk, just feet from shore. I have also caught smallmouth bass up to 4 pounds and have seen walleye in excess of 6 pounds in this area of the river.

Regardless of your proximity to the Ashuelot River, it is worth your time to explore it, whether for an afternoon or several days. The variable habitat and multitude of species are enough to keep any angler interested and challenged.

Gabe Gries is a fisheries biologist for the New Hampshire Fish and Game Department. If there is a topic or body of water you’d like to hear more about, please email Gabe at fishnh@hotmail.com.