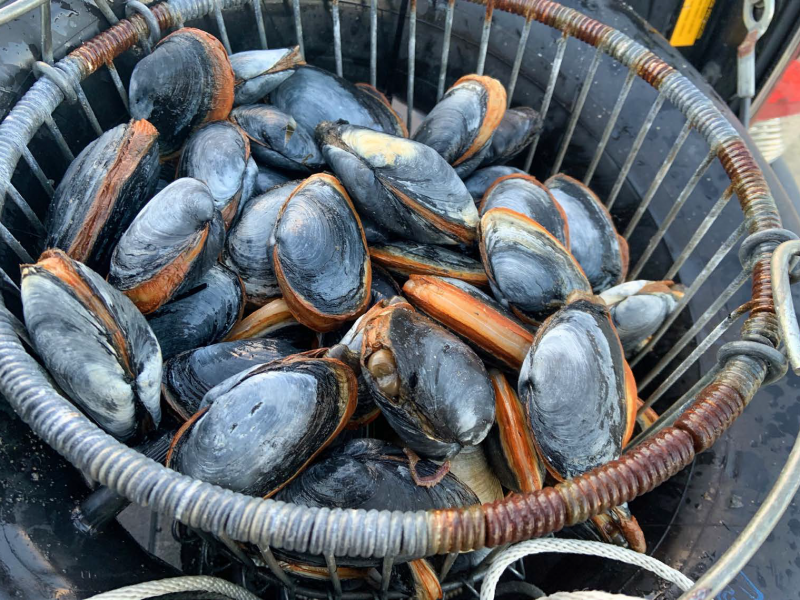 For me, 2020 was the “year of the clam.” I spent much of it living like one, secluded, enclosed in a shell, only occasionally sticking my neck out into the outside world. With nowhere to go and a strong urge to avoid supermarkets, I spent much of my free time harvesting a ridiculous number of shellfish.

One of the first jobs I ever had was as a “picker” at a screen printing factory. My sole duty was to count t-shirts in a basement for various orders, pack them into boxes, and hump them up a rickety old staircase to the screen printing press. I counted shirts, always by the dozen, all day long, and when I went to bed at night, I counted shirts in my sleep. To this day, anytime I am carrying out a mundane task, I count every item I am handling. It has become engraved into my subconscious. I count everything. I am like Count von Count on Sesame Street. And, in particular, I always count my clams.

So, last year, I decided to keep a clam log and record each one I brought home. I knew I ate a lot of clams, and I thought it would be interesting to document how many I plow through in a year.

The answer to that question for 2020 is exactly 3,178. That averages out at about 61 clams per week. By my estimation, I harvested well over a ton of shellfish. With my only expense being a $30 shellfishing license, it cost me less than a penny per clam. The bulk of my bounty was steamers (1,558), closely followed by oysters (835), and quahogs (770). That’s a lot of clams!

Clamming Tips and Techniques (How to Gather Quahogs)

I gave a few away, some were bartered for beer, and I traded two dozen oysters to a man named Dick Austin for two pounds of Maine bear sausage. However, the vast majority of those clams were consumed by my wife and I. It got to the point where she was complaining about the amount of steamers we were eating (which I think is a preposterous thing to complain about). So, I was forced to get creative, mix things up, dig other kinds of clams, and try some new recipes.

One might think that after eating so many bivalves, I would be sick of them. That’s not the case at all, and in 2021, I will attempt to break my record.

Our first recipe was sent to me by Scott Crain, who is the executive chef at a ritzy private golf club in Rhode Island. Scott is one of the finest chefs I know, and any time he sends me a recipe, I follow it to a T. Following is his interpretation of a classic dish, oysters Rockefeller.

Below are some of my favorite ways to mix up shellfish recipes to keep things fresh.

The current world record for clam eating was set in 2010 when Sonya “The Black Widow” Thomas consumed 312 cherrystone clams in six minutes. This epic feat occurred during a clam-eating contest at Peter’s Clam Bar in Island Park, NY. The Black Widow also holds the women’s world record for eating oysters (564 in eight minutes) and softshell lobsters (44 in 12 minutes).

The Perils of Eating Too Much Shellfish

In the winter of 2013, I went on a shellfish-eating bender of epic proportions. It started off with a peck of quahogs, six dozen steamers, and a 6-pound lobster. Soon after, a powerful winter storm washed thousands of bay scallops up onto a local beach; I walked away with exactly 673 of them.

The next week, my mollusk mow-down continued. Baked scallops, sautéed scallops, scallop bisque, and scallop po’ boys. I was in seafood nirvana, eating like a Viking and washing it all down with frosty IPAs. (I had traded 100 un-shucked scallops for a case of Shed Brewing Co. IPA.) And then it hit me. I woke up in severe pain in the middle of the night. It felt like someone had clamped a vice grip onto my big toe. The pain was excruciating, and to make matters worse, I had no idea of the cause.

There was no sign of trauma, just a little bit of swelling and a whole lot of bone-chilling pain. Since I am as stubborn as a clam, I waited several agonizing days before finally breaking down and going to the doctor. I needed industrial-strength painkillers and a good explanation for what was causing my mystery ailment.

The doctor took one quick look at my toe and then asked me a simple question. “Have you been eating a lot of shellfish? Or drinking more beer than normal? Looks like you might have a bad case of gout.”

Up until then, I thought gout was an ailment that affected only old men. But it turns out that gout is caused by a buildup of uric acid in the blood, which can form crystals in a joint, usually somewhere in your foot. Both shellfish and bitter beer create high levels of uric acid, and I had overindulged on both, causing this little piggy to go to the hospital. The doctor gave me some painkillers and a bottle of little blue pills that cleared up the gout in no time.

I learned my lesson and now refrain from overdosing on clams. I still eat copious amounts of shellfish but try to limit it to three meals per week, and I’ve been gout-free ever since.