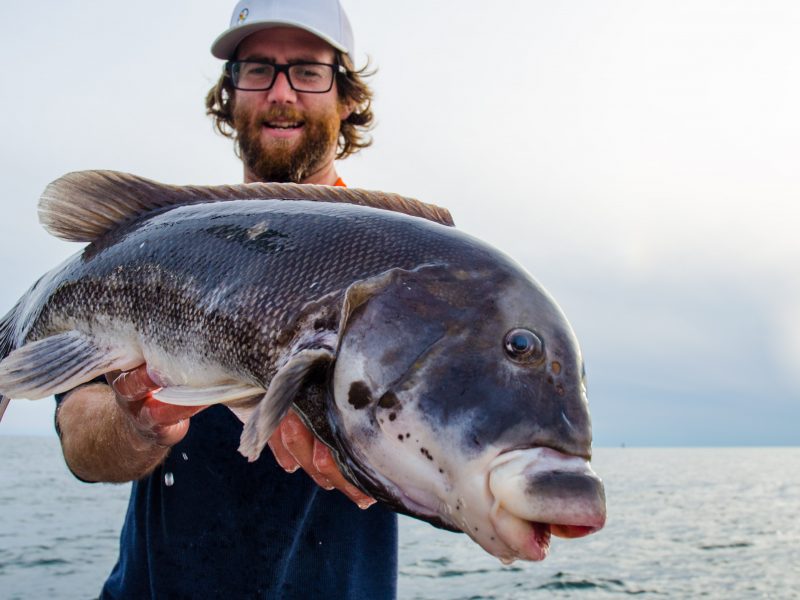 Experimenting with a variety of rigs, different baits, and obscure locations is often the key to landing big tautog.

Tautog, also called blackfish, are more affable than you may have been led to believe, and catching them is not easy to master. There’s a big difference between catching a couple for dinner and consistently pulling a limit of big ones. The biggest tautog are far more selective than their smaller brethren, much more powerful, and smart enough to bury themselves in the stickiest structure at the slightest hint of trouble. For this reason, the most experienced and successful tog fishing pros are held in high esteem by those aspiring to battle more bruisers.

Learn tautog fish facts like how old a tog is based on its length, what they taste like, and the size of the world record blackfish.

I’ve asked a quartet of the Northeast’s most highly regarded tog masters to reveal a few secrets specifically aimed at targeting bulldog tautog. These are skippers who routinely bring home—and occasionally even release—some of the biggest whitechins of the year. Listen up, blackfish fans. Class is now in session.

How to Catch Tautog

Finding tautog in the fall is all about adjusting the depth as the season progresses and the water grows colder, says Capt. Jason Colby of Little Sister Charters, who targets tautog out of Westport, Massachusetts.

“I start the season in late September in 20 to 25 feet of water,” says Colby, “and by mid-November, I’m looking deeper than 30 feet. The last spot I’ll fish, around Thanksgiving, is in 47 feet of water.”

Although waiting on a tide change might be necessary when fishing for other species, being patient and staying put rarely pays off in tautog fishing, says Colby. “If the tautog are there and you put a crab in front of them, they’ll usually bite. So, if you make a drop and aren’t getting bites, assume the fish aren’t there and move on.”

Although a single-hook rig is a good all-around option, when given the choice Colby opts for a 1-ounce S&S Bucktails Tautog Jig. “The reason why people love to fish for blackfish is the bite—it’s fun, and it’s a challenge to get the timing right and hook up. With a direct line to a jig, that fun is multiplied,” says Colby. “The bite on a jig is different. A big tautog will inhale the jig and immediately begin swimming off. You’re not only feeling for the tap, you’re watching the line to see if it moves. When you know the fish has the jig in its mouth and is swimming away, that’s when you strike.”

Capt. Rich Jensen of the Orient Point, Long Island charter boat, Nancy Ann IV, has a reputation for catching huge blackfish. The top bulldog to come over his rails topped 16 pounds, but this well-respected skipper makes it a point to note that between 12 to 13 pounds has been the top weight in recent years.

“I can’t say that I’ve been doing anything radically new in my area,” states Jensen, “but I have made subtle changes here and there to stay on target more often than not.”

One thing this master blackfish skipper advocates to improve scores with big fish in today’s high-pressure fishing world is covering a lot of water so as not to overwork one honey hole. With the ability to range 15 miles to the west up into Long Island Sound and a similar distance to the east, Jensen is lucky that he has a lot of good rock- and structure-laden bottom over which to prospect.

“I try to work new bottom as much as I can,” explains Jensen. “The more I work new pieces into my trips, the longer I can let established spots rest and reload. This approach keeps my favorite pieces alive well into the colder weather. It’s hard to lay off some of the better spots because I need to produce daily, but by not over-pressuring any one location, I assure all of my clients a good shot at some great fish.”

It’s also important to be spot-on when you anchor over a specific piece of structure, stressed Jensen. If you aren’t getting the action you hoped for, pull up and reposition. With more pressure and fewer fish these days, you’ll really want to be tight up against the sticky stuff or right in the mussel beds to maximize big fish possibilities.”

The current world record tautog was caught by Kenneth Westerfeld off the coast of Ocean City, Md. in 2015 – it weighed 28 pounds.

Capt. John Marino of American Sportfishing Charters in Huntington, Long Island, specializes in catching big tog on ½- to 1-ounce blackfish jigs tipped with Asian shore crabs. It’s a technique he’s been using for more than a decade to deck bulldogs to 13-plus pounds, and he continues to refine his presentations each and every blackfish season.

“I’m not ‘jigging’ for blackfish in the way that most anglers jig for fluke,” notes this Western Long Island Sound skipper. “Instead, I get the jig to the bottom and try to keep it in place or drag it lightly across the seafloor and meticulously probe inch-by-inch to bump it against any structure I can uncover.”

Marino suggests that anglers jig for tautog around rock piles, ledges, and mussel beds in 20- to 30-foot depths, but notes that just as important as knowing where to work blackfish jigs is understanding where not to try them. “Avoid wrecks,” he warns, “It’s not hard to bounce a jig free of rocky snags but you aren’t getting it back once you set the hook into a wooden wreck or dead line. Stay in the boulder fields with this technique and you’ll do just fine.”

Until recently, Marino advised anglers to use jigging as a shallow-water technique. That advice has changed of late. With ever-improving braided lines and increasingly sensitive rods, he now regularly jigs in depths up to 60 feet. Another change: he sometimes jigs while drifting. “If the tide is slack or running real light, drifting lets you cover a little ground,” he explained. “It’s still vital to be around rough bottom, but you can work the edges without too many snags if you pay close attention to the end of your line.”

Last season, Marino discovered yet another way to successfully fish his jigs. After probing around the boat at anchor, he’d toss a jig up-current and work it back to the boat by reeling just fast enough to keep slack out of the line. Then, he’d work down-current by getting his jig to the bottom and constantly lifting up and letting out a few inches of line to let the lure settle back down.

“This is a great soft tide method,” he noted, “one that can put an extra bulldog or two in the cooler on those really tough days.”

Adjusting your tactics to the changing attitudes of the tog is important, says Colby. “I prefer targeting them with jigs,” says Capt. Jason Colby of Little Sister Charters, “but it’s not always what they want. At times, a basic single-hook rig will work better.”

Captain Michael Potts has iced his share of big tog while skippering his Blue Fin IV out of Montauk, New York. His top blackfish over the years is a 14.6-pound brute, but he once had a day that saw five bruisers over 13 pounds taken by his fares. That report still has me shaking my head in disbelief!

“We’ve naturally advanced our tackle with modern innovations,” says Potts, “and we continue to do so regularly. Today’s reels have smoother drags, which means fewer lost fish. The rods have more backbone to provide the leverage that keeps big ones out of snags. The best rods now bend throughout their length to absorb the power of a big tog. All of that means once we hook a good one, it’s probably coming into the boat. On the downside, with all the added competition there are fewer big ones around compared to the days when our tackle was a little less reliable.”

Like most great blackfish skippers, Potts likes braided lines—but he’s very particular about making the right choice. “I use Fire Line,” he states. “It’s extremely sensitive and quite stiff, making it easy to work with and great for tying knots.”

One tip that Potts offers to make your fishing day go a little smoother is to fill different reels with lines of different colors. He likes white, black and yellow because they are easy to differentiate when unraveling tangles. In that same vein of keeping things simple, Potts shuns the use of top shots for blackfish.

He favors a single-hook bottom blackfish rig with the sinker suspended just two or three inches below a size 5/0 Gamakatsu octopus-style hook that is snelled to a 12-inch length of 80-pound, abrasion-resistant monofilament line. His main leader is 50-pound-test fluorocarbon. 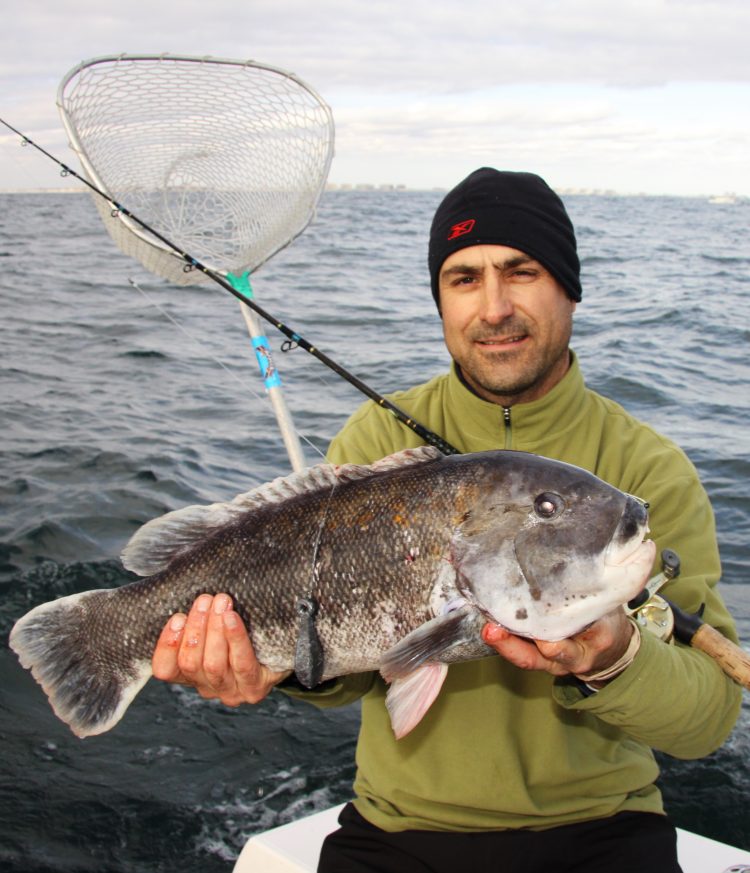 “Some guys complain that these hooks get dull or that the tips bend when working around the rough bottom blackfish favor,” says Potts. “So what? They stick the fish real well. If your tip dulls or bends, toss it and grab a new one. No big deal.”

“Right now,” says Potts, “I’m experimenting with 5/0 circle hooks for blackfish. These are bigger than my customers bring along, but all fish have to do is get their lips around the hook point and a steady lift will stick them. I’m also shuffling through different tog baits all the time. Experiment with different blackfish hooks, baits, and tog rigs until you find consistency.

One thing that keeps the game fresh for Potts is trying new ideas throughout the season. He experiments with a variety of different baits, obscure locations, and even hooksets. If you aren’t trying something new to stay ahead of the curve, he believes, you are probably falling behind.

Jensen believes great blackfish fishing is tied very closely to successful mussel sets in any given area. “When you have a healthy, fresh set with minuscule mussels strewn across the bottom in an area like Fishers Island, ‘togging is bound to be good. Look for the tiniest mussels—those little ones that stick on the point of your hook if your rig drags on the bottom. A lively bottom almost always means good fishing, even earlier in the year with porgies and sea bass. Great action with those species in an area is a tip-off that fall fishing for blackfish should also be productive there.”

This crafty blackfish pro also believes many anglers don’t change their baits enough. “The meat from a crab bait washes out quickly, so reel up and put a new one on every four or five minutes. Your discarded bait acts as chum and helps put the fish in an aggressive mood. For most of the season, I take the shells off my crab baits to leave the meat exposed. Only if the blackfish are very aggressive do I leave the shells intact.”

Originally published in November of 2016.