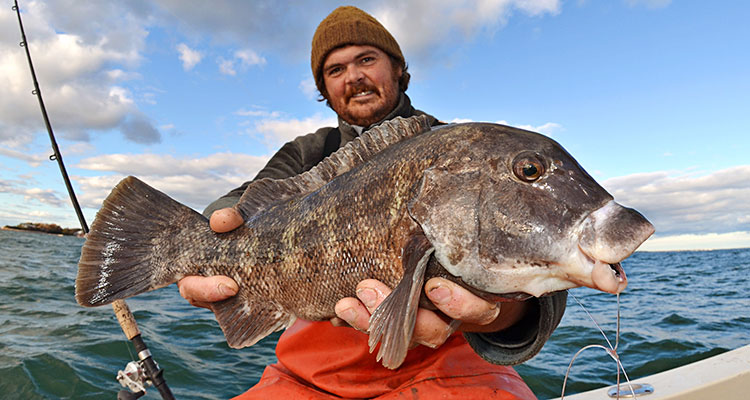 Pictured above: Hard-fighting, great-eating and with a face only a mother could love, the tog is one of the most popular species on Long Island.

Between the rocky bottoms of the North Shore and the wrecks and reefs of the South Shore, Long Island is blackfish heaven.

They’re ugly, they’re slimy, they break off rigs, they trick you at first bite, and for fall fishing on the North and South shores of Long Island and the New York Bight, tautog are one of the most sought-after fish. Making their homes among the rock piles, wrecks, and other structure in ocean and bay waters, the fish that was once a bycatch is now a targeted species for many recreational fishermen. That fall chill is in the air and it’s time to load up on jigs, bank sinkers, 2/0 hooks, and leaders to get ready for some of the best up-and-down fishing you can imagine.

Fun if by land, good if by Sea 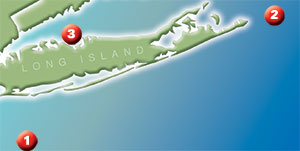 1. Cholera Bank – This rough rock bottom lies roughly 10 miles south of Jones Inlet in about 70 feet of water. It produces blackfish from late October through the end of the season in early December.

2. Southwest Ledge – Reachable from Montauk, the Southwest Ledge off Block Island is prime tog territory. With rocky bottom and sharp depth changes, there is a lot of prime blackfish structure here and a lot of big blackfish.

3. Between Eaton’s Neck Point and Crane Neck Point – This seasonal blackfish hotspot has rough bottom and a lot of nooks and crannies for feeding tog to root around. You may have to make a few drops before finding the fish, but when you do, it won’t take long to fill the cooler.

When it’s that tautog time of year, just about any rockpile, pier or bridge, wreck or reef will hold fish. This year should prove interesting with the after effects of Superstorm Sandy littering our waters with a wide spectrum of debris. Next to surfcasters, there probably isn’t another group of anglers who covet their spots to the extreme like those after blackfish. The easiest way to silence the hooting and hollering of a boat on the bite—jockey close to them with your thumb on your GPS screen. Blackfish, while they will migrate offshore and come back in, for the most part don’t move around much. So the difference between fishing the bow and stern can be skunk and glory. Many a day on The Sea Queen VII out of Sheepshead Bay in Brooklyn you can hear, “You got life up there?” “Action brings action” isn’t just a cliché. While there’s always a rogue fish regardless of species, it’s fairly common for a crowd to gather where there’s food. Be mindful though, these fish can be spooked and even a 3-ounce sinker slamming into the ocean floor from an overzealous fishing buddy can push them back into the structure.

There’s nothing like really getting on the fish, and tautog are no different. But, it’s earned. Scouting wrecks and piles before the season opens is work well rewarded. Shorter days, higher probability of uncooperative weather, and structures being fished out from one week to the next makes it essential to have an arsenal of spots to drop on. Some of the best blackfishing can be found on spots small enough that they can only accommodate a single boat. If you’re only dropping one anchor, invest in a second to better hold your boat over the spot.

Like every other fishing rig, there are a ton of variations on the traditional blackfish rig. Braided line is almost mandatory. A majority of blackfish will be well shy of double digits, so heavy duty gear isn’t necessary. The finesse and feel of a sensitive rod and braid is tops.

When fishing with the traditional setup, I opt for the tandem hook. The presentation of two crabs instead of one coupled with the chance at a doubleheader works for me. Others prefer using a single hook to focus on that one fish working their bait. Both will catch fish, and both call for a surgeon’s loop for the sinker, fluorocarbon leader, and one or two dropper loops to hold your hooks, which can range from 1/0 to 6/0, depending on bait size. Fluorocarbon can be pricey but even pricier is the mental and emotional cost of losing a fish to a leader that has succumbed to constant rubbing on wrecks and rocks. Some rigs incorporate a three-way swivel, but keep in mind, a sinker popping off your leader is a quicker fix than losing a whole rig in the rocks.

While the rigs just spoken about can be found hooking up to blackfish on both the North and South shores of Long Island, blackfish jigs have made believers out of many in the Western Sound. John Knight, the designer of Tidaltails Jig’z, has been fishing them for years. In recent years, recreational and charter captains have found the jigs to be spot on. Simplifying the rig is one advantage—just a swivel and leader is needed. A more realistic presentation is the bigger advantage. Used almost exclusively with crabs, the patented color schemes, down to the gold specks, mimic what the fish are seeing naturally. The shallow waters of many wrecks and piles in the Sound allow an abundance of sunlight to hit the bottom. A squirming Asian crab hooked up to one of these just doesn’t get any closer to the real thing. They made a believer of me, and just about everyone following reports the weekend before Sandy hit. Loaded with a frisky Asian crab in 8 feet of water off one of the small islands of the Western Sound, a 17.1-pound blackfish of a lifetime took my offering and gave me one of my best fishing days on record.

Don’t bow to the cow, but play statue when feeling that first bite. In addition to a serious need for an orthodontist, the visible teeth of blackfish are grabbers. Deeper in their mouths are crushing molars that make quick work of a variety of crustacean shells. Tog will take soft baits such as clams or hermit crabs, but the problem is the dent in your bait budget with hermits, and clams are easily robbed off the hook. Asian, green, and fiddler crabs are the top choices among blackfish anglers. Asian and fiddlers are preferred on the North Shore in calmer waters whereas green crabs are often first choice on the ocean.

Regardless of bait choice, the bite is generally the same. There’s a sensitive balance of letting the fish eat and not allowing it to get back into the wreck or rocks, which almost always results in a break-off. After you feel the pecks of a biting tog, slowly lift the rod and reel.

As hard as patience is to find with a fish on, it’s worth the wait to allow the unlucky tautog the chance to swim out and then he pulled up and over into the cooler. Fight them slow and steady, more so when fishing deeper water.

Superstorm Sandy didn’t officially end the 2012 tog season, but it did for many. The amount of anglers dealing with bigger priorities, and those that got hit hard in their marinas, didn’t get a full season in.

The fish were still around on better known, larger wrecks and reefs, but other areas had their entire underwater landscape revamped, yet some fishermen still found excellent fishing. On the South Shore in the New York Bight, the New York state blackfish record was broken in 2012 by Captain Greg Nardiello of the Ocean Eagle V who caught a 20-pound 1-ounce togzilla. The North Shore still saw fish on party boats like Captain Nick’s Never Enuff and numerous private boats that were able to get out after the storm. It was more of a hunt than usual, though.

Early recon and incidental catches of tautog while targeting sea bass shows evidence of a promising season. There will be challenges of smaller spots not producing from being silted over or shifted. Access to areas for collecting Asian crabs under their favorite rocks can be an issue.

More importantly in the big picture is the health of the fishery. Currently, blackfish, or tautog, is classified as a vulnerable species. New York State regulations for 2016 are four fish at 16 inches between October 5 and December 14. There was a time when there was no limit and a year-round season, so the responsibility falls on all of us to conserve the resource. This unique, intelligent, and historic fish deserves to be shared with generations of anglers to come.