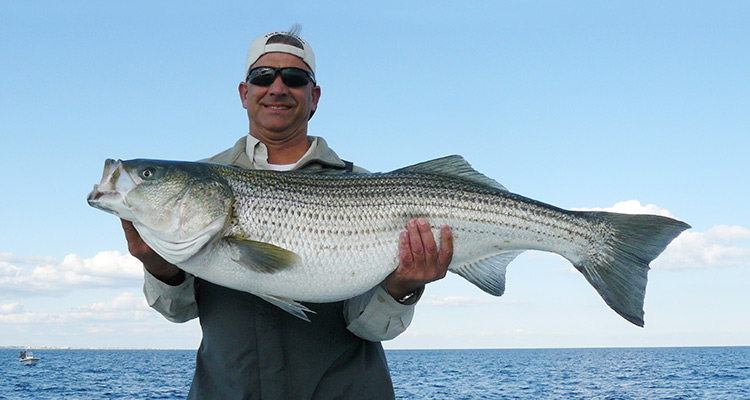 Stay on the bass all day long by targeting deepwater structure with shad baits.

Every June, thousands of striper fishermen sharpen snag hooks, prepare cast nets, and ready their boats for early-morning departures. Bunker will be snagged and dropped, live-lined, and cut into chunks, with the hope of enticing a big spring-run striper.

On most days the bass-on-bunker bite lasts from first light until about 8:30 a.m. By then, the waters are overrun with boats motoring over the bunker schools, shutting down the bite. At this point, most anglers go home or go bottom fishing. The bass dissipate and don’t return until late in the day when the bunker schools regroup after the crowds have thinned out.

The late morning and early afternoon hours are a difficult time to catch bass if you continue to fish with live bunker near the surface. The fishermen who continue bass fishing through the day usually troll with wire line or chunk bunker. I have a different approach that has accounted for numerous 40- and 50-pound stripers and requires neither trolling nor bait. Those tactics work, but nothing is more effective at catching midday bass than deep-jigging with swim shads.

SWIM SHADS
The swim shad arrived on the fishing scene around 2000. This soft-plastic lure features a realistic profile, a lifelike eye, an integrated weight, and a paddle tail. The Swim Shad quickly became a favorite lure among striper fishermen, both from the boat and from shore. Often a straight retrieve is all that’s needed to tempt a striper with a swim shad, making it a great choice for anglers who are new to artificial lures.

The first step to catching stripers through the middle of the day is to find them. By mid-morning, most bass have moved off to deeper water that has structure, current and favorable water conditions—about 60 degrees and clear. The areas where I find midday bass are often over structure in 55 to 65 feet of water. There are a number of productive areas that exist within the three-mile mark, but finding them will require some homework, studying charts and looking for fish-holding areas. The bass that move into these areas in the middle of the day are staging, not feeding, but they won’t pass up a swim shad drifted right past their nose.

The key to targeting stripers on this deep structure is trusting your electronics. As you drift over the structure, look for marks on the fishfinder and pay close attention to the depths of those marks. Your goal is to present the bait at the level as the fish. As I mentioned before, these deepwater bass aren’t feeding, and as a result, they won’t swim very far to chase down a bait. 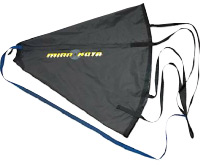 With drift speed and direction being crucial to presenting swim shads to deepwater structure, a drift anchor can be a valuable tool when moderate winds make it difficult to maintain a vertical presentation. The funnel shape of the drift anchor catches water and creates drag, slowing the boat’s drift and giving you more time over productive structure.

Boat placement is crucial for presenting the shads to these deep-water bass. The boat—and by extension, the lure—should move at the same speed as the current. Wind against tide will not work, since the fish face into the current and wait for the bait to come to them. The line should be almost vertical and the bait should be close to the bottom, but not on the bottom. Too much scope will cause the baits to drag, which equals no hits and frequent snags. I make short drifts over the structure, and if I don’t get bites quickly, I move to a new area.

The rods I use for this technique are rated for 20- to 50-pound line and have fast action, but soft tips to impart action to the shads. For reels, I use high-speed spinning reels with good drags and plenty of line capacity, like the Tica Talisman. My reels are spooled with 30-pound-test braided line. Without the use of braided line, this type of fishing would be tough. The hits are not hard and could be easily missed if the angler isn’t paying attention, so the lack of stretch and increased sensitivity of braided line is a big help in detecting the light-biting bass.

I use no hardware in this rig. I attach 12 feet of 30-pound-test fluorocarbon with a modified Albright knot and attach the shad with a non-slip mono loop.
I use the 6 ½-inch, 4-ounce Tsunami Deep Shads, and add BioEdge Bunker Scent to the baits. The fluttering of the shad tail triggers the stripers to strike, and the scent causes them to hang onto the bait a little longer which allows a little extra time to set the hook.

When jigging the shads, a variety of retrieves will tempt stripers, from long sweeps of the rod tip to short hops and even dead drifts. The key is mixing it up until the bass tell you what they want. The most important thing when working the shads is to never lose contact with the bait. Follow the bait with the rod tip as it falls. If it stops falling or the line goes slack, set the hook! The hits are extremely light, but quite often, that light tap can turn out to be a 40-pound-plus striper.

So, this month, when the morning bite dies, don’t head for the dock. Head for some deep structure, break out the swim shads, and battle big stripers when the rest of the fleet has called it a day.