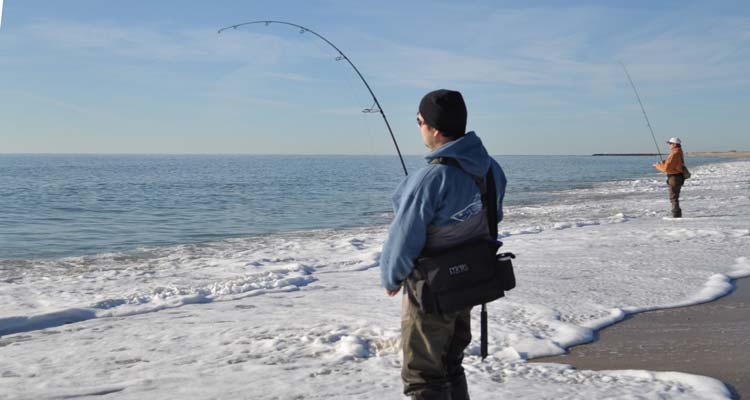 December’s chill or December’s warmth? These days it’s more the latter when it comes to finishing up the fishing season, but one thing is for sure: the window to catch that last striped bass of the season is closing fast.

Over the many years living along the coast, I have seen seasons end the first week of the month after brutal cold dropped the ocean water temperatures into the low 40s. On other seasons, I have fished right up until New Year’s Eve in a t-shirt while catching that last bass of the year. So what will this December bring this year? Here are a couple possibilities.

It was the first weekend in December and since the Thanksgiving holiday, the weather had been very cold. It felt like the season was going to end early with the arctic blast, but I was still in striper mode, so I was still going fishing.

I geared up for sub-freezing weather. The wind chills at sunrise were in the 20s, and that meant breaking out the neoprene 5mm surf top plus plenty of layers of wool from head to toe. The thing that made me get out of a warm bed were the sand eels that I knew had dug into a sandbar not very far from my house. With a short drive and walk, there was a very good chance I was going to find the last action of the season.

When I walked over the dunes, I could see about 6 other fishermen who’d had the same idea. Sure enough, we found a pretty good size school of small bass feeding heavily. As the water was actually warmer than the air, many of the guys didn’t stay long after wading out and catching a few fish.

I don’t know what temperature it takes for saltwater to freeze but I can tell you on this day it was happening pretty quickly. Gloves were a must because if your hands got wet, you were done. Ice was forming in the rod guides after every cast and retrieve, but the fish and action was all worth it as we had a hit or a fish on every cast.

When I got back to my truck and took off my surf top and surf bag you could see the layers of ice from the splashing of waves that froze solid to me. It took over an hour to warm back up. It goes to show that this you can find large schools of striped bass feeding heavy out front on the beach even well into the winter months.

My fishing club, the Berkeley Striper Club, runs a fun intra-club event every December with teams competing in a tag-and-release tournament, and it always logs some great numbers of fish tagged. We usually receive some of our best feedback with these striped bass being recaptured, allowing us to track their yearly movement up and down the entire East Coast.

And as cold as that adventure was you can also find the exact opposite this time of the year with summer-like conditions that make it a real pleasure targeting late-season striped bass.

One of my favorite types of surfcasting is fishing the back bays right around now as resident striped bass will come in from the surf through the inlets and start looking for a good meal and somewhere to hunker down for the long winter.

The tides were just perfect for a little day/night back-bay trip a few years ago with little wind and mild air temperatures. At some point, late in the season, the resident fish will move into the deeper holes to winter, regardless of the weather. In New Jersey the back-bay striper season closes just after midnight on New Year’s. The reason behind this regulation was to protect the resident populations of stripers that go dormant in the winter, making them easy targets for fishermen looking to snag them. It might be an old and outdated rule but giving the bass a little break from fishing pressure is probably a good thing. It also gives me a chance to regroup after a long, hard fishing season.

I made my way to my favorite bridge about an hour into the outgoing tide, and sure enough the fish were stacked liked cordwood in the shadow line. If you have ever seen this, it is like heaven. You can’t wait to make that first cast up current to allow your presentation to sweep right in front of the fish. Often, they will not hesitate going after the lure. These fish are very hungry as most of the bait has been long gone, and throwing a jig and soft rubber offering is irresistible to them. The bird’s eye view watching really adds to the experience.

For the next four hours, I caught fish after fish with some breaks in the action when they spooked from time to time. But they would keep moving back into the area looking to feed until first light and like someone hit a switch they disappeared.

After swiniging by WaWa to grab that third cup of coffee and something to eat, I headed to the salt marshes and deep-water holes along the sod banks because that is where I knew the fish would be. At this time, I like fishing soft rubber swim shads deep, steady, and very slowly, and it seems that every year, this approach takes one of my better bass of the late fall/early winter. On this morning, it didn’t disappoint with a beautiful 17-pound striper for my efforts among some smaller other ones as well. What a night and what a day.

I really enjoy this time of the year with the peace and quiet on the water and taking in every minute watching nature prepare for the long winter ahead and it allows me to reflect on the entire year of fishing adventures and fun times I have experienced knowing that the next few months, it’s time to rest up and then get ready to do it all over again.