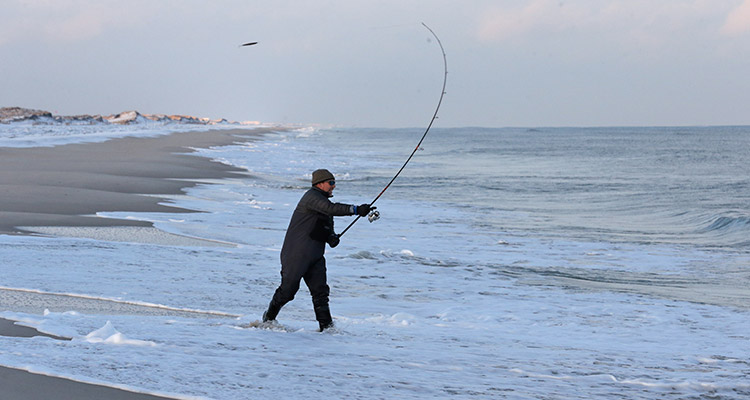 19 degrees. That’s what the weatherman had said before I left the house for the beach. The ocean was at its coldest point all season at 38 degrees, and despite three layers of socks and thick neoprene waders, my feet immediately felt the cold when I waded ankle deep. I made my first cast, retrieved the 5 ¾-inch Fin-S Fish without a touch, and considered right then going home and calling it a season until spring. But I ignored my common sense and stayed, working the small jig along one side of the jetty. After several fishless casts I walked quickly to the next pile of rocks. I cast the jig, let it hit bottom and began a slow, steady retrieve, giving the rod tip a slight twitch every few cranks. Halfway through the retrieve, it felt like the jig had caught some weeds on the bottom. I lifted the rod to free it, and something pulled back. I set the hook more purposefully and the rod bent as a fish fought to free itself. The fight was short, and in a few seconds I was looking down at 24 inches of Jersey surf striper, my first ever in February. My second came shortly after. Ninety minutes later I was back in the truck, blasting the heat, a smile still frozen on my face.

By February, most rods have been racked for more than a month and surf fishing can feel light years away. Yet, while the majority of fishermen dream of once again standing on the beach or jetty and casting into the breaking waves, some anglers are making it a reality—and catching stripers year ‘round in the Garden State surf.

Plenty of striped bass never leave New Jersey in the fall. Many stripers winter over in the back bays and rivers, where they are off limits until March 1, but a large number remain just off the beaches, where they feed on sand eels, crabs and other small forage. The fish rarely exceed 28 inches, making them prime candidates for light tackle.

Slow Down and Speed Up

To catch midwinter stripers from the surf, you’ll need to move fast, but retrieve slowly. That is, covering water should be your primary goal, but you’ll need to do so by working your lures at a snail’s pace.

Coldwater stripers tend to form dense, slow-moving schools, which means that a fishermen could be 50 yards away from the mother lode of holdover bass, and not get a touch. Also, there are fewer bass around this time of year, making for a lot of dead water between productive areas. Stay on the move, making a few casts in each likely spot and moving on if you don’t get any action. This hit-and-run approach also helps keep the blood circulating, keeping you warm on even the coldest February nights.

Being cold-blooded, a striper’s metabolism and energy level is linked to the water temperature, and when February temperatures dip into the low 40s and high 30s, stripers become sluggish. Retrieve lures slowly—just enough to keep a jig off the bottom and just enough to make a minnow plug swim. Minnow plugs, like the SP Minnow, have been winter killers. Teasers fished in front of the plug are mandatory, and most fish will fall to this smaller offering. For soft-plastic jigs, the Zoom Super Fluke or Tsunami Sand Eel are tough to beat.

Fly-fishermen can also enjoy success with winter stripers. Sand-eel and spearing imitations draw strikes, and weighted flies like the Clouser Minnow get down into the strike zone of a bottom-hugging bass.

Bait will take winter bass as well. Clams and bloodworms are the best bet, although finding the latter can be close to impossible in February. Frozen or salted clams are available at most tackle shops that remain open through the winter. Go for salted if they are available. They are almost as good as fresh clams and will stay on the hook much better than frozen clams.

The same rod-and-reel outfit used for backwater fishing during the warmer months is perfect for fishing the surf in the winter. The small lures used for this are best fished on 8-foot rods rated for ½- to 1-ounce. Plus, the light rods make sport of the schoolie stripers that prowl the surf this time of year.

Even though it can accelerate the icing up of guides in very cold weather, 20- or 30-pound-test braided line is the best choice for light-biting February stripers. The hits from the lethargic stripers can be hard to detect even on sensitive, non-stretch braided line. Fly-fishermen will benefit from an intermediate line cast on an 8-weight fly rod, as long as the winds are light. In breezy conditions, a 9- or 10-weight will better punch the line through the wind and into the strike zone.

Hot Spots in a Cold Surf

Winter stripers congregate around jetties, either the pockets where the rocks meet the sand or the deeper water off the tip. Dramatic sandy beach structure, like a bowl or deep hole will attract winter bass as well. Nearby deep water seems to be the common thread among winter striper haunts. The Monmouth and Ocean County surf tends to hold most of the wintering stripers.

Calm, clean water produces the best action. Winter bass aren’t likely to stick around and feed in rough surf, and will instead retreat to deeper water. West winds will keep the water calm and clean.

Whether the water temperature is 38 or 78, the off hours remain your best bet for catching striped bass in the surf. Stripers are more likely to move shallow, and into range of surfcasters, after sundown. Bait fishing from the late afternoon until sundown is a good way to put a winter bass on the beach.

Air temperature has little influence over the fishing, but plays a big role in how long a fisherman can tolerate being out. A good pair of neoprene gloves will keep hands toasty and dry, and help extend your hunt for winter stripers. A wind-proof and waterproof outer layer is necessary.

You Won’t Know Until You Go

Some years, mild weather can make for fantastic winter fishing. In 2011, stripers up to 20 pounds were reported by New Jersey surf anglers, the fish drawn in by mild water temperatures and abundant forage in the form of rock crabs and sand eels.

Though the productivity of winter surf fishing varies from year to year, there are always some stripers that stick around. Winter surf fishing is a surefire cure for cabin fever that doesn’t require a boat or tropical vacation. Bundle up, hit the beach and get a jumpstart on your striper season.