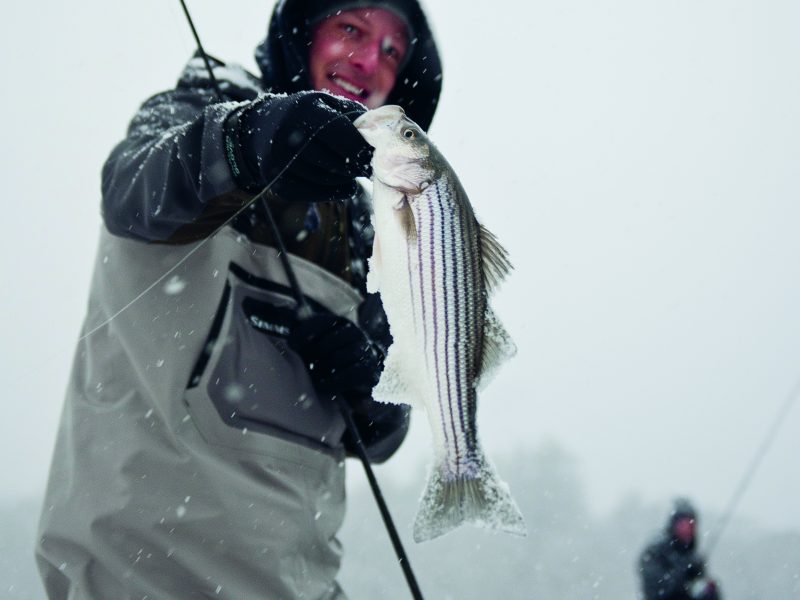 Pictured above: Some backwaters hold resident schoolies through the winter.

The pursuit of striped bass is practically an American pastime. They are the prize of every surf angler from Maine to North Carolina, and there are populations of them in northern Florida, in the Mississippi River all the way to St. Louis, and as far west as Texas. There are landlocked populations in lakes and reservoirs across the Southeast, and the descendants of a few hundred New Jersey stripers transported across the country by train in 1879 still swim the Pacific from Southern California to Washington State. What I’m getting at is, well, they’re everywhere.

In the Northeast, however, the striped bass is a cultural icon, and “striper season” is a months-long holiday. Fishermen travel throughout the Northeast and Mid-Atlantic to kickstart and extend their striper seasons, but in my home waters, a typical striper season usually plays out like this:

In the early spring, juveniles and small males leave their wintering spots first, moving into the open bays and estuaries. When targeting stripers on the early days of spring, pay attention to water temperature and tide. When the season begins, outgoing tides are best because warm water from the back bays is washing out. I prefer to wait until the tide is half out, so that the sun has had some time to heat up the cold water.

In my home waters of New Jersey, I catch stripers on clams, worms, and unweighted Zoom flukes in the cold waters of early spring. I’ve also had success on grass shrimp imitations fished slowly along grass flats. As things get moving and temperatures increase, I catch most of my fish throwing bucktails and heavy swim shads from shore in inlets and rivers. When the fish start moving out, I throw large metal lips and swimming plugs.

Further north, fishermen inspect their spring stripers closely to determine whether they are “holdovers” or “fresh.” It’s widely accepted that the presence of sea lice is a sign that a fish has recently migrated into the area. Though early spring migratory fish are similar in size to holdovers, it’s still an important distinction. The sight of sea lice means that the striper season has begun, and the flood gates are about to open.

Even though most of the larger fish have departed Jersey for northern waters, summer is my favorite time to fish for stripers. I love the light tackle, the heat, and the fact that I don’t know what I’m going to catch. I get into weakfish, stargazers, fluke, bluefish and, of course, striped bass.

In the summer, I usually go for outgoing tides, just after the turn, and there must be bait in addition to structure and current. Depth isn’t necessarily the most important factor, as most of my summer bass are caught in 4 feet of water or less. I fish 3/8-ounce bucktails and 3- to 4-inch soft plastics on small jigheads for summer bass. Summer is great because if you get into one bass, there are very likely a dozen others waiting to eat. The only thing I don’t love about summer is picky bass on rain bait. Watching them blow up on small baitfish and not take any of my offerings is frustrating, but the fish will often take a snapper-popper or a clacker rigged up with a small fly or teaser.

Off Montauk and in New England, where large stripers ride out the heat of summer in deep rips and over rocky ledges, bait is the most productive tactic, whether it’s eels, bunker, or mackerel. Some of the fish will slide into surfcasting range under the cover of darkness where eels, live or rigged, reign supreme.

Fall is boom or bust. A big storm could send the fish packing before the fall blitz begins, or the bait and bass could make their migration far offshore and out of range of surf and boat anglers alike.

I have moments every year when I love the fall and moments when I hate it. I follow schools of bait, sometimes for miles, along the beach, stalking that next blitz. Sometimes it works out; other times I’m cursing the season. Either way, there’s a progression to fall and it depends on the bait in the water.

If the mullet really run, and they run first most of the time, a plug like the Salt Pro Minnow or Bomber Long A is my go-to. When the peanuts leave the bays and rivers, I like small glide baits and stubby metal lips. What about sand eels? The past two years have been awesome for sand eels, so I throw A17s and A27s with green tails and my own sand eel imitation flies as teasers. Sometimes, in years like this one, it seems like every plug in my bag is just an expensive way to deliver a fly to a fish. But hey, whatever works. By December, when the water is getting cold, I fish cut bunker overnight.

Bass fishing is a feast or famine endeavor. There’s a cycle to it, predictable like spring fishing. When the fish are here, there’s a huge expenditure of time and money on the part of both fishermen and captains. In spring, business booms for the shops, commercial bait fishermen, and captains who all contribute to the sport. When summer’s fluking and tourism passes, the same spring craze is reinvigorated by the reverse migration of the stripers as they head south. The ghost towns around well-known striper spots are populated by tired-eyed fishermen, looking for that next blitz. Convenience stores become faux town halls, where every vehicle in the parking lot is either a contractor’s pickup or a surfcaster’s beach buggy. Friends who only meet on the beach meet again in these settings, trading plugs, stories, and maybe even a little rum.

Then winter comes. Most bait shops are closed for the offseason and boats are out of the water. When the bass move out, it all goes quiet. Captains move their boats to North Carolina or Florida. Aside from diehards catching the occasional short taken on warm days in winter, most fishermen have turned their attentions elsewhere, fishing for something else. The only bass-talk you get is the at the conventions. Winter is more about surfcasting gear and culture than it is about actually fishing.

Stripers are almost as much of a pastime as they are a fish. The effect they have on us has always been of interest to me—grown men and women, staying out all night, regardless of weather, for what John Skinner called “The Striper Pursuit.” It’s in the name of the pursuit that fishermen stack up in trailers or sleep in their trucks by the Barnegat Inlet. The odd spring hours of living in your truck and sleeping on the beach are part of what makes striper fishing both so difficult and so appealing. The hours of lost sleep are like a sacrificial offering to the season, and anyone who fishes knows that the fishermen who put in the most time catch the most stripers. There’s real passion in surfcasting; there must be, for the hours we put in and the conditions we endure. As far as I can tell, no fish inspires such a passion as the striped bass.

We call the months when stripers are out of reach the “offseason.” Although the fish may be far away, they are never far from our thoughts as we bide our time, hone our strategies and prepare for the next striper season.

Striped bass are anadromous, meaning they live in salt water but return to fresh water to spawn. This spawning strategy is employed by salmon, shad, herring and sturgeon, and it allows those species access to the more forage-rich ocean waters while providing their young with improved chances of survival in the (relatively) protected riverine waters.

While salmon make spawning beds or redds for their eggs, striped bass eggs must remain suspended until they hatch. Eggs that sink to the bottom will become covered in silt and suffocate. A striped bass egg sinks slowly, so in order to provide the best odds of survival, a female striper rises to the surface to drop her eggs. A group of smaller males will escort her to the surface, where some of them will bump the female’s sides to encourage her to release the eggs. When she does, the males release their milt before the entire group returns to the river bottom.

HOW BIG DO STRIPERS GET?

The all-tackle world-record striped bass weighed 81 pounds, but most fishermen believe stripers grow considerably larger. There’s a report of a 125-pounder taken in a net off North Carolina more than 100 years ago. The Maryland Department of Natural Resources netted a 92-pound striper during a survey in the mid-1990s. Every few years, a rumor circulates of a lucky fisherman catching and releasing a record-size fish that was on its way to spawn in the tributaries of the Chesapeake.

In order for a striped bass to reach world-record size, it must have good genetics (the potential to grow large), come from a robust year-class (the more stripers spawned in a given year, the greater the odds more will survive and grow to legendary proportions), and be very lucky.

Cod may have built American independence from the crown, but the striper was the first fish to have conservation laws passed on its behalf in the US. In 1639, Massachusetts passed a law stating that stripers couldn’t be used as fertilizer, which distinguished it from all other fish on the market. 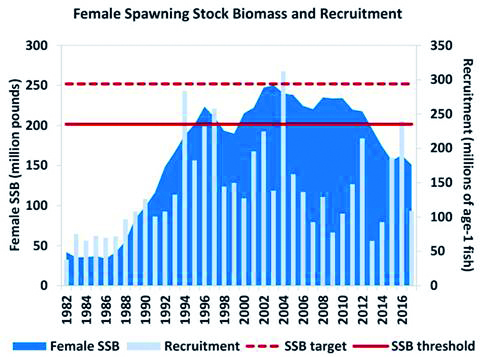 In the 480 years since, striped bass regulations have remained a contentious topic. In the 1970s and 1980s, overfishing nearly wiped out the large female “spawning stock” (and smaller stripers that had not yet spawned), while pollution and environmental factors made for poor spawning conditions in the Chesapeake Bay. The result was a striped bass population collapse. Thanks to unprecedented cooperation from the fisheries managers in the Atlantic states, the striped bass population rebounded into what was one of the greatest success stories in American conservation.

The population was declared “rebuilt” in 1995 and regulations were relaxed, only to be tightened again in 2013 when an assessment showed the stock was declining below target levels. The measures weren’t enough, and the 2017 stock assessment showed that once again, the striped bass is being overfished. This fall, fishery managers will consider regulatory changes for the 2020 striper season.

Striped bass are members of the temperate bass family, which also includes white perch and white bass. Characteristics of temperate bass usually include silvery sides (but not always) with lateral stripes. They have two dorsal fins, one spiny and one soft-rayed. They are schooling fish and voracious predators with a wide diet.

White perch occur in many of the same coastal rivers where stripers spawn. White bass are strictly a freshwater fish and are most common around the Mississippi River and parts of the Great Lakes.