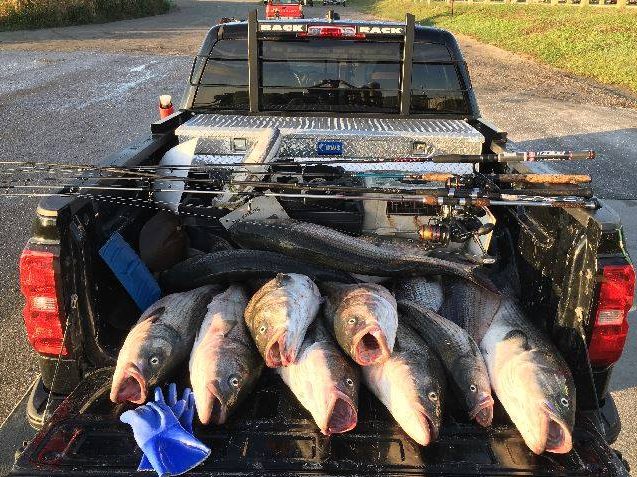 The Rhode Island DEM has posted an update on a citation made last September for possessing 11 striped bass over the limit. A plea agreement was entered on July 11th, with the owner of the vessel being fined $1,506.75.  The estimated value of the fish, had they been sold, is around $2,000.

In September of 2018, an Environmental Police Officer (EPO) from DEM’s Division of Law Enforcement (DLE) boarded a vessel associated with repeated hunting and fishing violations during a routine patrol in Point Judith. The front of the vessel appeared to be dipping low, as if there were considerable weight in the bow. In the original post, the vessel was reported as belonging to Michael A. Saviano of Warren, Rhode Island.

The occupants of the vessel had stored their illegal catch in a hidden storage compartment in the bow. Once discovered, the EPOs seized 13 striped bass – 11 over the daily limit allowed with two persons aboard a vessel.

According to the RIDEM, a common illegal practice is for Massachusetts commercial fishermen to fish the area around Block Island for striped bass under the guise that they are fishing recreationally and then transport them back to Massachusetts where they are sold. In an effort to curb this, a new regulation was adopted in 2015 that requires striped bass larger than 34 inches (the minimum commercial size) that are caught recreationally to have their right pectoral fin removed immediately. It is then illegal to sell or purchase a striped bass with a cut pectoral fin in both Rhode Island and Massachusetts.

In a press release after the incident was reported in September 2018, Steve Medeiros, Executive Director of the Rhode Island Anglers Association, said, “It’s a shame that a few people are greedy and have no respect for our fisheries. We need stricter penalties along with judges who are willing to treat fisheries violations with the severity they deserve.”