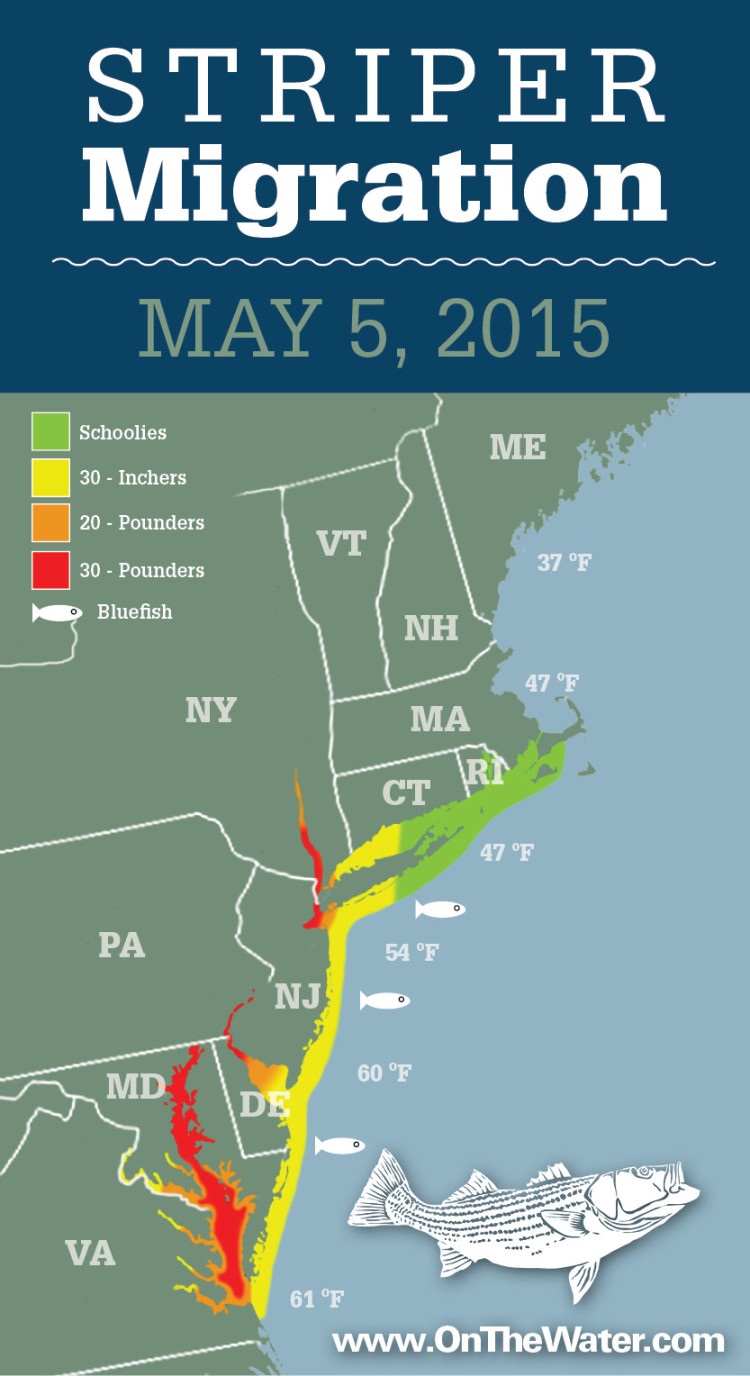 The striper spawn in the Chesapeake was “steady and protracted” reported the Maryland DNR. Winter rain and snow runoff a good March plankton bloom and subsequent zooplankton bloom, which hopefully will provide a food source for newly hatched striped bass larvae. Cross your fingers for a big 2015 year-class!

Post-spawn fish have begun to leave the spawning grounds, and many big, spawned-out fish are being caught by anglers in the Bay. In the next week, those fish will begin leaving the Bay and heading up the coast toward New Jersey.

Big egg-laden stripers are moving up the Delaware River on their way to spawn. Fish as large as 40 pounds have been caught in the past week. Stripers are being caught as far as Trenton.

Big numbers of short stripers are moving through South Jersey backwaters. There are some keepers, but most fish appear to be from the large 2011 year class. In some areas, getting through the bluefish to the stripers has been difficult.

Large stripers continue to move through Raritan Bay, presumably on their way to spawn in the Hudson River. Bunker chunks have accounted for fish up to 40 pounds. Trolling wire line also accounted for a 40-plus pounder last week. Big bluefish have also invaded Raritan Bay.

More surf stripers were reported throughout New Jersey this week from Cape May all the way to Sandy Hook. Clams continue to be the best bait, but minnow plugs are catching a few fish as well.

Large schools of bunker attracted bluefish to the surf and bays of Ocean County. Barnegat and Great bays continue to have big schools of 6- to 16-pound bluefish.

Keeper stripers are moving east along the South Shore of Long Island, where clams have been the hot bait, particularly around Fire Island.

Holdover striped bass is very good in the rivers and at the river mouths, where the line between holdovers and fresh fish has begun to blur. River herring are putting larger bass to 20 pounds on the feed, especially at night. Fresh schoolie stripers have flooded into Long Island Sound. Get the details in the Connecticut Fishing Report

More reports of fresh schoolie striped bass to 30 inches have been reported in recent days from the south-facing Rhode Island shorelines! They have also begun to spread into Narragansett Bay and other Rhode Island locations.

Martha’s Vineyard reported fresh schoolie stripers last week, and over the weekend fresh stripers were reported along the South Coast, in Onset, and even in the Cape Cod Canal. On Moday, we recevied reports of fish in the Falmouth salt ponds and on the Upper Cape side of Buzzards Bay.  North of the Cape, waters are still cold and only holdover bass are being caught in Boston Harbor.