Big, post-spawn Chesapeake Bay stripers are moving up the coast! Larger stripers are trickling into New England. It’s time to get serious – and make sure you’re signed up for The Striper Cup!

Remember that striper fishermen are now required to use circle hooks when using natural bait. Also, let’s all do our best this season to make sure that any stripers we release swim away healthy. 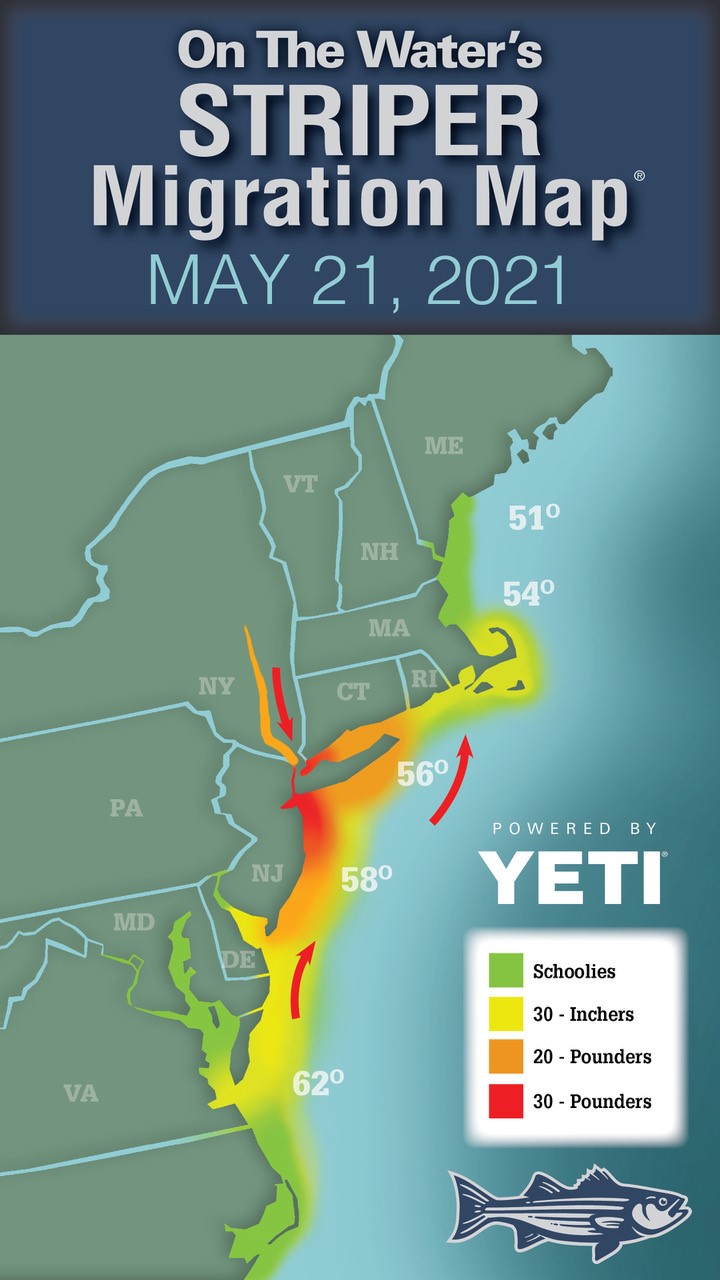 Striped bass have finished spawning and mostly moved out of the Delaware River. Check out Delaware Surf Fishing for a complete report if you’re a fisherman in Delaware Bay.

In southern NJ, the striped bass front remained solid for fishermen trolling bunker spoons and mojos as some of the 30- to 40-pound class stripers have moved up. Live-lining bunker is producing when you can find isolated schools, and this tends to occur early in the morning. Striped bass to 30 inches are in play off the inlet jetties and bay bridges. In northern NJ, some BIG bass are around, including several in the 50-pound range hitting Mojos, shad umbrella rigs, and live baits in Raritan Bay.

It’s been a great run in the Hudson River. Striper spawning was spotted this past week, and the bigger bass have started moving down river.

Mixed schools of schoolie stripers and 30-inchers can be found all around Long Island, and bass to 45 inches have been reported at Montauk. It’s only going to get better as we head toward the full moon next week.

Bass to 30 pounds are pushing into Western Long Island Sound to feed on bunker. Good numbers of migrating “slot” fish from 30 to 35 inches have moved in along the Connecticut coast, in the rivers, and into Rhode Island waters. A few schools of 30-pound fish have been reported on bunker schools.

Mostly schoolie stripers around Cape Cod this week, with more bass in the 30-inch class and the occasional isolated school of bigger bass around bunker (pogy) schools. Anglers are hoping the full moon tides next week bring in the first big wave of 20-pound-plus stripers. Schoolie stripers are moving in waves along the South Shore, schoolie blitzes are occurring in Boston Harbor, and Cape Ann has had more bass to 26 inches trickling in.

Schoolies are officially in New Hampshire and southern Maine estuaries. Find the warmest water around to catch these early arrivals.