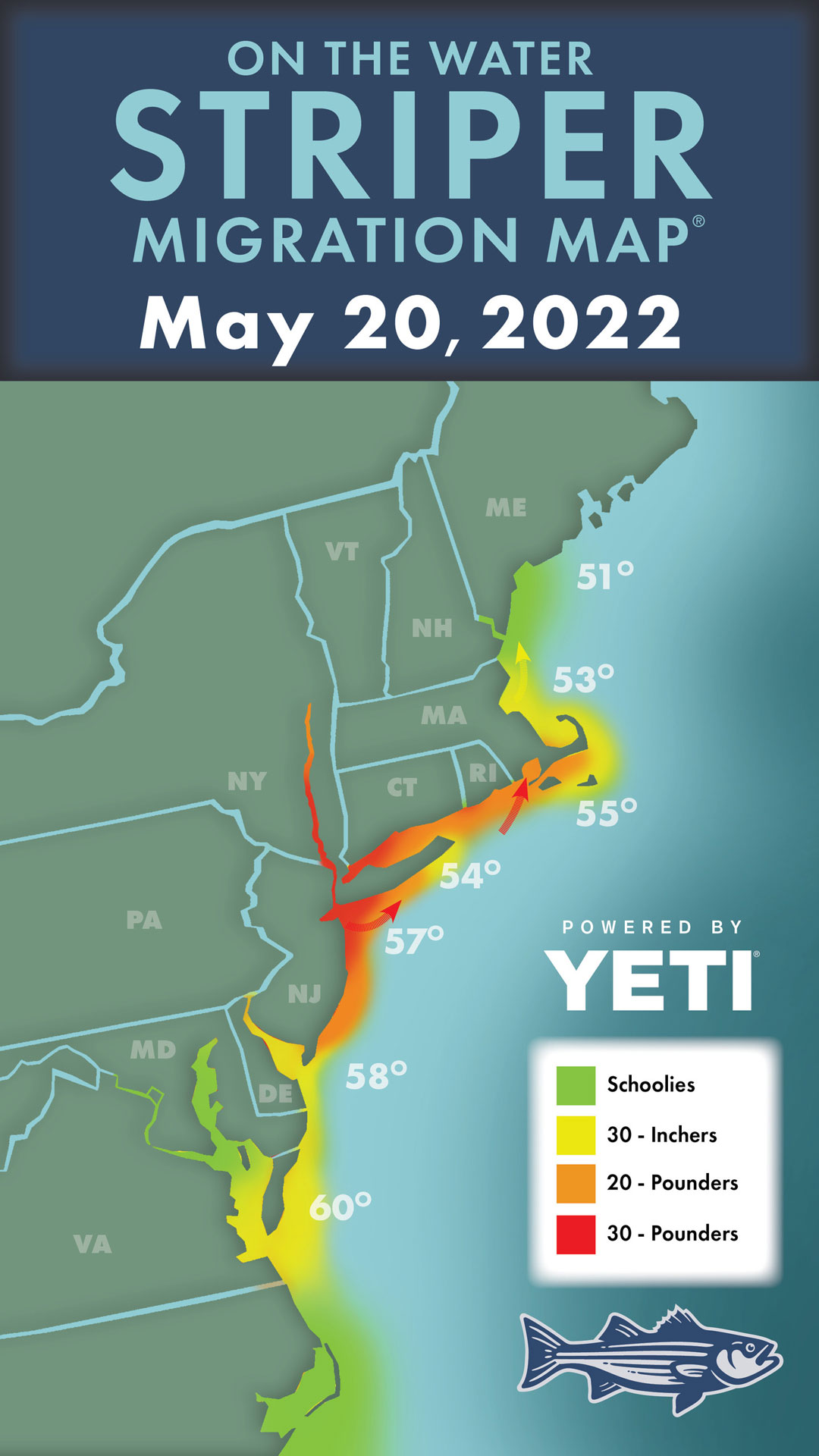 Big post-spawn stripers are pushing north from the Chesapeake, with fishermen reporting 20-plus-pound stripers (and bigger!) on southern and central New Jersey beaches all the way up to Cape Cod.

The summer striped bass season started on May 16, and the entire mainstem Bay, all the way to the Conowingo Dam, will be open June 1. The 2022 striped bass regulations are on the DNR website.

With the summer striped bass season now underway, anglers should downsize their trolling lures and also experiment with light-tackle jigging with leadheads and plastic skirted jigs with trailers. Trolling small bucktails, downsized shad-umbrella rigs, and red plastic hoses (surgical tube lures) along the shipping channel edges near Podickory Point, the Dumping Grounds, and near the Bay Bridge should produce the small to medium-sized summer striped bass in the upper Bay. The minimum size for fish to be kept is now 19 inches, with a limit of one fish per angler per day. If you chum or chunk for striped bass, you must use non-offset circle hooks, and fishing with live eels is not allowed.

Post-spawn stripers have begun to leave some of the spawning tributaries and move out into the Bay as they make their way out to the Atlantic.

The appearance of large striped bass in the surf around Ocean County is a good sign that post-spawn Chesapeake fish have reached New Jersey. Raritan Bay is still loaded with bass, although  many stripers have moved up the Hudson River to spawn.

The Hudson River is hosting large striped bass as the spawn is underway. Western Long Island Sound has some bigger bass, and big bass are spreading east along the south side of Long Island with slot-sized fish and 20-pounders in the backwaters and on the beaches. Fishing on the eastern end of the island is still a bit slow.

More 30-inch fish are being caught along the Connecticut coast with the best action in the major tidal rivers.

Big bass arrived in Rhode Island waters this week with stripers to 40 pounds feeding on bunker schools inside Narragansett Bay.

Fishing continues to improve in Massachusetts, with slot-size fish mixing in all the way to New Hampshire. Fish in the 30-pound class crashed the Cape Cod Canal this week along with good numbers of slot-sized fish. There are large numbers of schoolies all around Cape Cod with more big fish mixing in on every tide.

Schoolie stripers are being found in the rivers in good numbers, and 30-inch-class fish are beginning to trickle in.