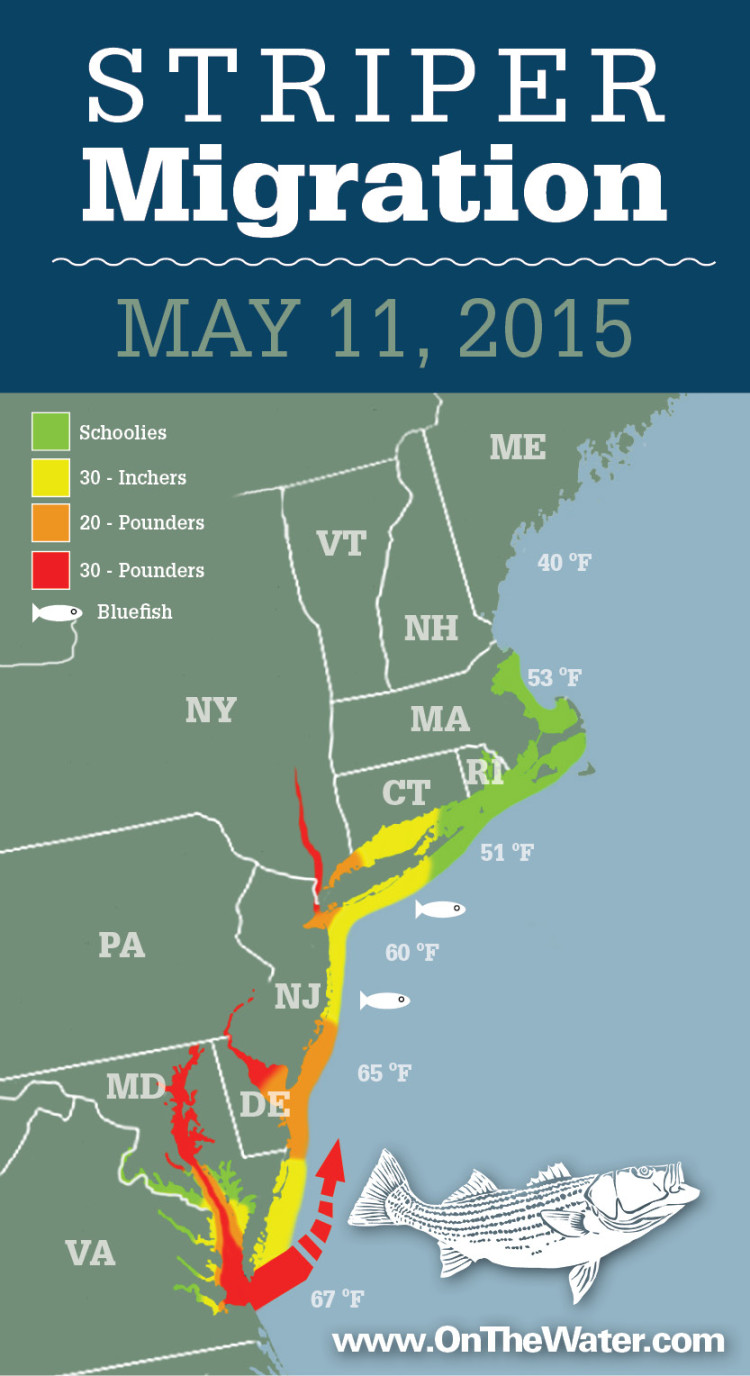 Post-spawn striped bass from the Susquehanna Flats area should be making their way down the bay this week so prospects are high for good fishing this weekend in the upper bay.

Last week, there was also a big striped bass spawn on the Choptank and Nanticoke rivers and most likely the Patuxent and Potomac rivers also.

Post-spawn fish have begun to leave the Bay and are heading up the coast toward New Jersey. In the next week or two, we expect to hear reports of some large bass colliding with bunker schools off the Jersey Shore.

Overall, the striper spawn in the Chesapeake has been “steady and protracted.” Cross your fingers for a big 2015 year-class!

Stripers are spawning in the Delaware River. Look for big post-spawn fish to begin showing up in Delaware Bay catches any day.

New Jersey’s bluefish bonanza continues, with the ravenous blues beating up bunker schools in the bays and along the beaches. Some anglers are fighting their way through the bluefish and catching quality stripers into the high teens. The large post-spawn bass from the Chesapeake have yet to make an appearance in New Jersey, and the large stripers that were in Raritan Bay appear to have gone into the Hudson River to spawn.

Holdover striped bass is very good in the rivers, at the river mouths, and on the beaches of Long Island Sound. More 30-inch-class stripers have been reported this week, particularly around river herring runs.

Greater numbers of fresh schoolie striped bass to 30 inches have been reported in recent days from the south-facing Rhode Island shorelines and inside Narragansett Bay.

Over Mother’s Day weekend, fresh stripers were reported in Buzzards Bay, along the south side to Chatham, in the Cape Cod Canal and along the Sandwich beaches on the Cape Cod Bay side. River herring runs are loaded, squid are in thick off Onset, and there have been reports of worm hatches in the south side estuaries.

North of the Cape, stripers have been reported in Plymouth Bay, the North River in Scituate, Boston Harbor, and along the North Shore. Cape Ann estuaries produced numbers of fish on Sunday.

With waters warming rapidly and striped bass as far north as Plum Island, we expect to hear of the first fresh schoolies arriving in New Hampshire Seacoast waters any day now.  Southern Maine should have stripers before the end of the week!