One year later, and we are in a much different place than we were in March 2020. Last year at this time, we were dealing with beach closures and limited boat ramp access as we figured out how to stay safe in a pandemic. Now, we can focus on starting the 2021 striper fishing season!

But first, some housekeeping:

Striped bass managers are currently collecting public comment as they design a new plan to manage striped bass. Here’s how to submit your comments.
Remember that striper fishermen are now required to use circle hooks when using natural bait.
Also, let’s all do our best this season to make sure that any stripers we release swim away healthy.

Ocean waters are about even with last year at this time. Should we expect a similar start to the striper season? For a refresher, you can check out this video review of the 2020 striper migration map. 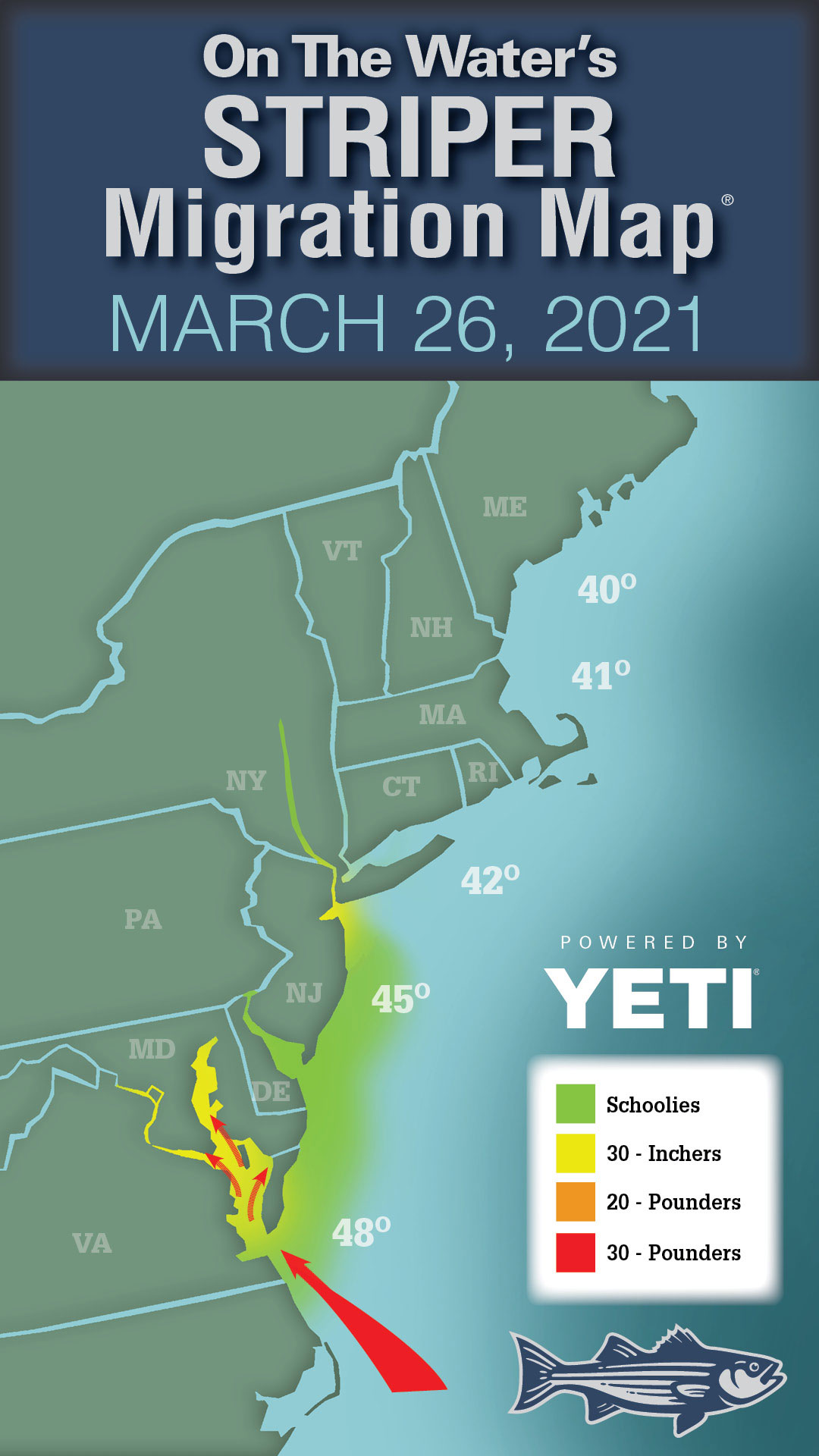 Striped bass are moving toward spawning grounds in Chesapeake Bay tributaries, and smaller stripers are getting active in warming inshore areas in Delaware Bay, inside New Jersey rivers, backwaters, and bays, and at the west end of Long Island. Follow along as we track the Striper Migration. You can help by contributing to our weekly map updates—simply share your striper fishing reports here, and on social media with tag #stripermigration.

On the upper Chesapeake, a string of warm days has brought surface water temperatures above 45 degrees and into the mid-50s in some of the tributaries. Accoring to the Maryland DNR report, the Susquehanna Flats striped bass catch-and-release season is starting to gain the attention of anglers looking for some early striped bass action. The season is open until March 31 and then will be closed to any kind of striped bass fishing until May 16. At this time anglers are seeing mostly smaller male striped bass. Casting soft plastic jigs and topwater lures in the morning and evening hours are producing some of the best results. The large female striped bass will begin to arrive soon. Since this is a catch-and-release fishery with pre-spawn striped bass, great care and preparation are required when handling fish.

A few boats are venturing out on the bay exploring striped bass catch-and-release possibilities this week. Most will be trolling the required six lines or less, usually pulling parachutes or bucktails without stinger hooks. Others will be light-tackle jigging along channel edges when fish can be seen on depth finders, or jigging at the Calvert Cliffs Power Plant warm-water discharge. The striped bass catch-and-release season for the Maryland portion of the Chesapeake Bay is open through March 31 and then will be closed the month of April. The spring trophy striped bass season will open May 1, with a limit of one fish per person per day at a minimum length of 35 inches. The Maryland Department of Natural Resources will soon post the regulations for the summer-fall striped bass season.

The backwaters and rivers are fishing well for schoolie striped bass. Bloodworms are the top bait, but plugs and shads (fished slowly) are also producing fish. Raritan Bay has also been giving up fish from the bay beaches on bloodworms, with more keepers in the mix recently. With huge schools of bunker in the area around Sandy Hook, bigger bass could show up on any tide in the coming week.

Holdover striper fishing in the Housatonic River and in Connecticut River tributaries should improve as the fish will only get more active with warming water and the arrival of river herring. Holdover stripers are also stirring in some of the Rhode Island salt ponds and rivers.

Holdover striped bass have been reported in some fresh and brackish waters on Cape Cod and the greater Boston area as waters warm.