It’s the final spring striper migration map of 2021! Stripers are settling into summertime hotspots like Montauk, Block Island, and outer Boston Harbor. The Cape Cod Canal, which has been a reliable summer spot in recent years, was slower than normal this year, with just a couple short-lived bites. In general, the striped bass fishing from the eastern end of Long Island through Maine will ebb and flow throughout the summer, with full and new moon periods bringing enhanced action. Stripers will continue to move around, seeking bait and favorable water conditions. Reports from the past week of striper fishing were on the slow side, and that’s partially due to the weather keeping anglers at the dock and partially due to the neap tides brought on by the current moon phase.

As the water and weather continues to warm (as if the weather could get much hotter than it’s been the past week!) the bass will increasingly shift to a nocturnal feeding schedule, and daytime feeding activity will diminish. Early risers and night owls will enjoy the best striper action over the next couple months, and live or natural bait (fished with circle hooks) will give anglers an edge over artificials, for the most part. Stripers will have narrower feeding windows as they settle into summer patterns, but should you unlock one of these patterns, you could enjoy good fishing for weeks. 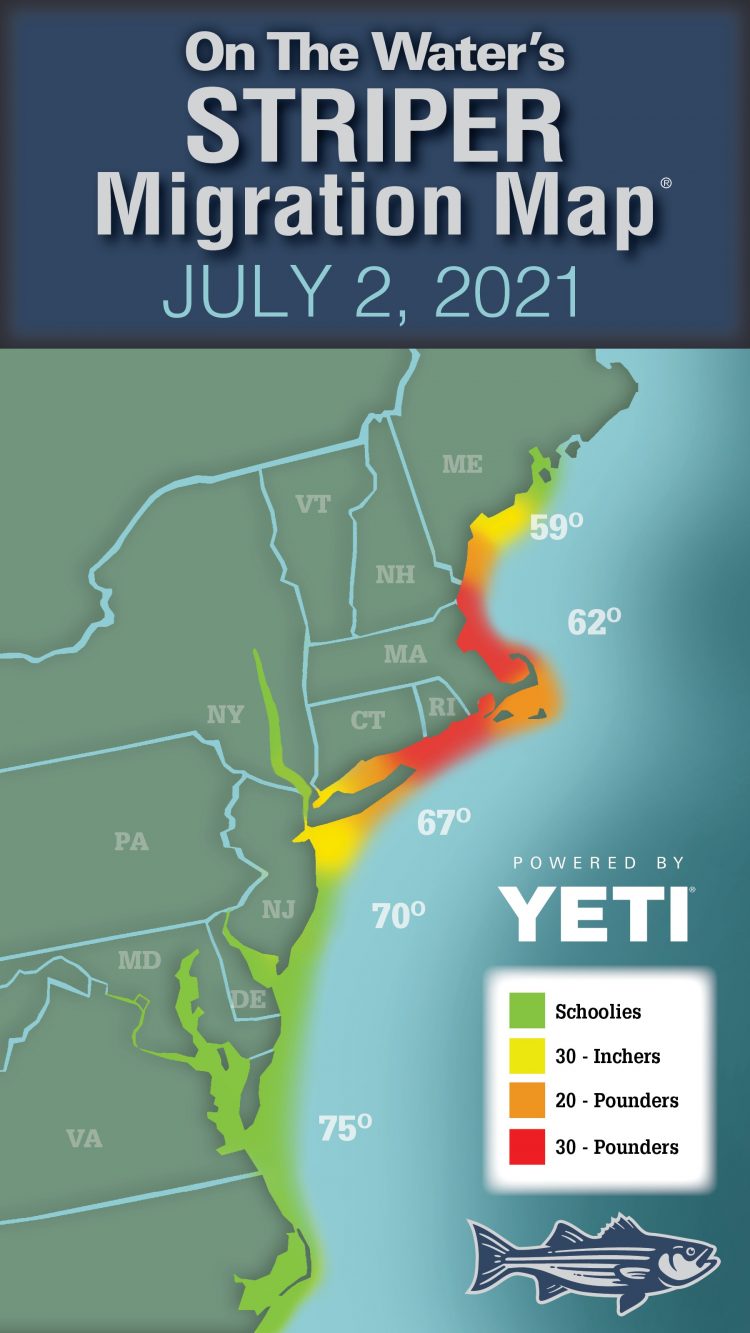 In Monmouth County, the beach bite for stripers is decent for schoolies, but larger bass are thinning out. The Raritan Bay bass bite has cooled as big fish move east.

Big stripers that were feeding on massive schools of bunker off the South Shore of Long Island appear to have moved east, where there are good numbers of slot and over-slot fish to 50 pounds. On the North Shore, there are good-sized stripers throughout the Sound, with fishermen catching 20- and 30-plus-pound bass with live bunker.

A post shared by Raul Ortiz (The Urban Angler) (@bigra183)

Big bass that have moved out of upper Narragansett Bay can be found toward Newport, where there are stripers from school-sized to 30-pounders. Block Island is holding big bass. Big stripers are still around the Eastern Sound.

The bass bite has been better in typical summer Cape Cod hotspots like Monomoy and the backside beaches to Race Point. Schools of bass are setting up around Boston again, but we’ll have to see if last year’s early-July big bass mayhem repeats.

With the arrival of pogies (menhaden), bass into the 40-pound range have reached Maine and New Hampshire, joining the schoolies feeding in the rivers and along the coast.