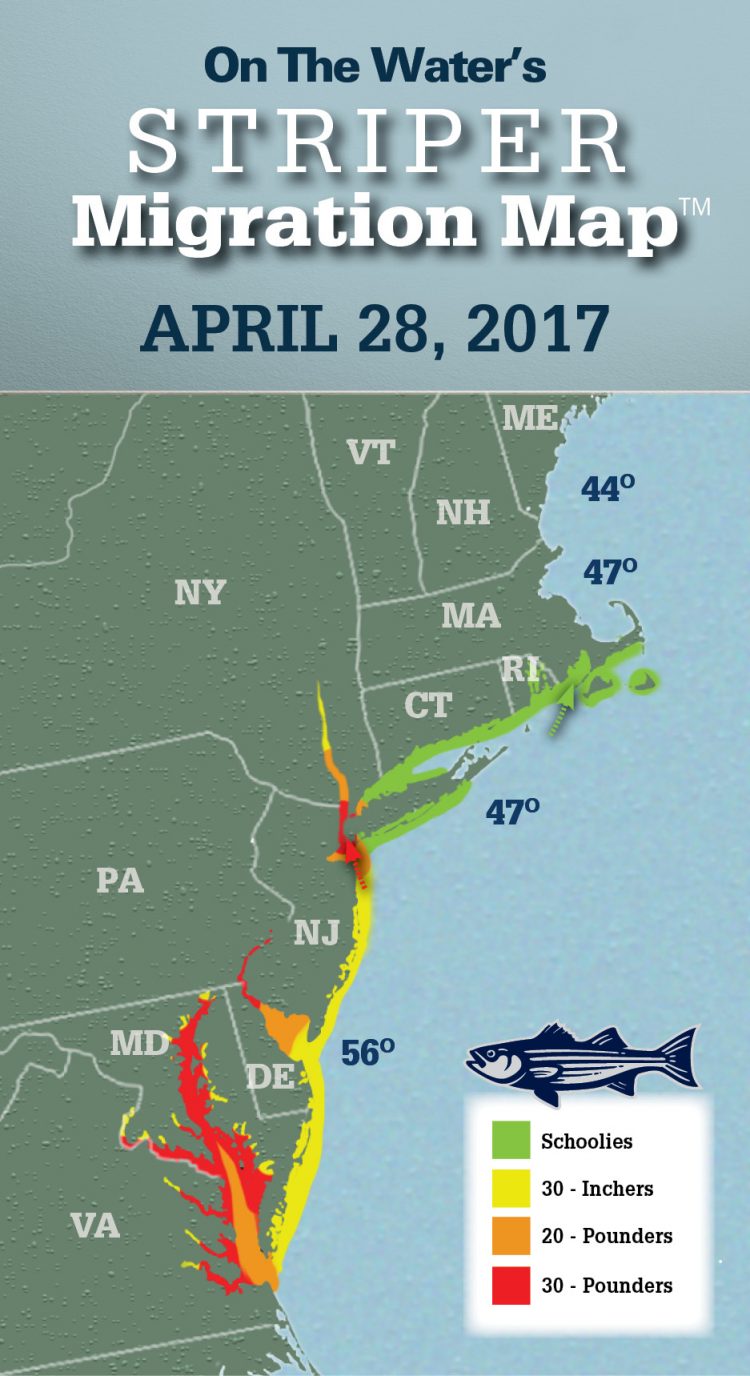 Postspawn stripers are working their way down Chesapeake Bay, keepers are in the Jersey shore surf, a wave of big striper hit Raritan Bay, and Rhode Island and Cape Cod are awash in fresh schoolies as the Spring 2017 striped bass migration continues along.

Stripers are trickling out of the spawning rivers and returning to the bay, according to the fishing report from the Maryland DNR. Right now, big stripers are being caught in the middle and upper Chesapeake Bay. The large postspawn stripers are expected to reach the lower bay next week, and after they pass by the Bay Bridge Tunnel, they will hang a left and head for the Northeast.

Large stripers are spawning in the Delaware River, but some fish have begun returning to the bay, where fishermen are catching them on clams and chunked bunker.

Note that as of April 1, the striped bass season is closed above a line running east from the South Jetty of the C&D Canal to the Pennsylvania line. Anglers using any type of bait in this area must use non-offset circle hooks even if they are not targeting striped bass.

A few larger bass have moved into some of the South Jersey inlets, including a 28-pounder caught in Brigantine according to our South Jersey Report, but fish of that size remain few and far between. Right now, most South Jersey anglers have been preoccupied with the big bluefish invasion, but there are still huge numbers of schoolie stripers along the beaches and in the bays.

In Northern New Jersey, some very large stripers moved into Raritan Bay this week according to our Northern New Jersey Report. Fish into the mid-40-pound range were taken by boaters trolling and fishing live or chunked bunker. Keeper-sized stripers in the teens are being taken in the surf, along with good numbers of short fish.

According to our Long Island- New York fishing report, big bass have moved into Jamaica Bay. Large stripers are beginning to make their way up the Hudson River, but no spawning is taking place just yet.

Wasn’t the biggest one of the day buttttt the season has started and the lockjaw these fish had last week is gone. #hudsonriver #springrun #striper #onthewatermagazine

Long Island is covered up small keepers and schoolies. The smaller bass are around in large numbers, and along with the arrival of big bluefish, fishermen have plenty to keep themselves busy while they wait for the Hudson River fish to spawn move through the Sound or the Chesapeake Bay fish to reach the South Shore.

In the rivers of Connecticut, larger stripers are becoming more active, chasing down the schools of river herring.

More schoolie stripers are hitting the beaches of Rhode Island, with fisherman catching from Charlestown Breachway out to Newport. No keepers reported yet.

While news of migrating stripers reaching Martha’s Vineyard came late last week, this week, small stripers seem to be everywhere in Buzzards Bay and along the South Side of Cape Cod. The fish have been seeking the warmest available water, which is in the narrows and up in the bays, according to our Cape Cod fishing report.

Still no word of fresh fish North of the Cape, but it won’t be long now.  A few schoolies have been reported in the Canal, so expect to see some migratory fish in Boston Harbor soon.