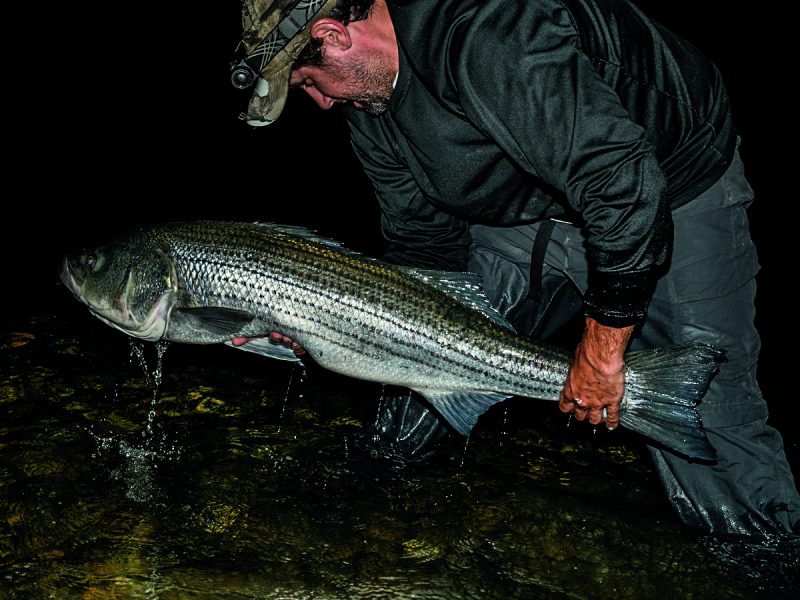 Fishing eels in the backwaters can produce surprisingly large stripers in small water.

My first steps sent ripples across the pond as I sunk thigh-deep into the estuary. Just a couple days earlier, I had walked the same route on land while the June new moon topped off the marsh. Over the next 15 aminutes, I waded through waist-deep water in the dark, occasionally banging against a dock or two.

Finally, I arrived at my destination—an area of land that created a chokepoint for the incoming and outgoing current. I let my eyes adjust to the darkness and took a deep breath, thinking about what might be lying beneath the glassy water. I lobbed an eel out into the current line that was forming as the tide picked up speed. I felt the movement of the eel pulse through the rod as it struggled to gain its bearings, then the line became taut as the eel found bottom. I gave the rod a gentle but purposeful tug to free the eel from the snag, and a thump immediately resonated all the way through to my arm as the line that was taut a second ago went completely slack.

Lowering the rod, I waited in anticipation as I began to count in my head. Just as I got to three, the line tightened, flung around to my left, and the battle was on. A fin emerged and created a distinct V-shaped wake in the water before being obliterated by a thrashing tail. Water flew up in every direction, the drag on my reel began to scream, and every dog in the area began to bark. What was usually a serene backwater was holding something much bigger than the schoolies I’d caught earlier that week.

As the fish tired and grew near, I jumped into the marsh since I knew I couldn’t hoist this one up over the bank. I pinned the fish against the edge of the sod bank and turned on my light. Grabbing the 35-pound fish with two hands, I took a quick measurement and thought to myself, “It worked!”

I love fishing eels. This fishing has long been known as one of—if not the—most productive methods for catching striped bass. It’s not especially glamorous, but it is my go-to tactic when fishing in any environment at any time of year—as long as it’s dark out.

For me, fishing live bait is the closest connection I’ll ever have to a striped bass. Boat fishermen, with their large livewells, have many forms of live bait they can fish for stripers, but for surf fishermen, eels are the only one that can be reliably acquired and conveniently transported.

When vision is cut off by the darkness of a new moon, you begin to learn what the subtle taps and vibrations of that eel mean. begin to visualize the eel beneath the water and its swimming pattern. As I pull it out of a snag, I picture the bait dancing upward, right before it’s inhaled by a hungry predator. I stand at the water’s edge staring up at the night sky, waiting. As I begin to forget about my surroundings, a shockwave emanates through the rod and into my hands, resulting in a moment of utter panic and excitement. There is nothing that I can compare to the feeling of a bass hitting an eel, and that’s what keeps me coming back.

Eel fishing is best done with a slower-action rod, with action defined by where the rod flexes. A fast-action rod flexes mainly at the tip. A moderate-action rod bends toward the middle, and a slow-action flexes down into the butt section.

Most modern surf rods have a faster action, and while these are great for punching plugs and jigs through the wind, they don’t provide enough cushion to cast an eel without having the hook tear through the bait. Therefore, a moderate or slow-action rod is better.

I prefer 8- or 9-foot surf rods rated for throwing between 1 and 3 ounces, which is enough to cast an eel and generally strong enough to subdue larger striped bass. I sometimes use a 7- or 8-foot inshore rod when eeling in calmer areas such as estuaries, but in heavier currents, windy days, or in rocky areas, I use a 9-foot surf rod for added casting distance and fish fighting power.

No matter what rod you choose, pair the appropriate reel with it. While there are a wide range of reels that can be used for eel fishing, I prefer sealed reels, like a Van Staal.

The most important feature for a reel is a smooth drag and the ability to spool it with braid. Most fishing reels these days have good drag, but that does not mean they will hold up to the rigors of surfcasting over multiple seasons.

A sealed reel helps protect the drag from water intrusion so that it doesn’t begin to slip or stick in the middle of a battle with a big bass. A bonus feature of sealed reels is that they are generally slower when it comes to line recovery, which is how much line a reel takes in per full rotation of the handle. If I am casting and retrieving eels, I try to reel as slowly as possible while still maintaining contact, which makes a slower retrieve beneficial.

I spool up 30-pound-test braid, and rig up with a 3-foot, 30- or 40-pound-test fluorocarbon leader attached to the braid with a 100-pound test barrel swivel. I think 30-pound-test leader is much better for knot-tying and prefer 40-pound test for fishing in rockier areas, where I want more abrasion resistance.

Where to Fish Eels

Eel fishing works just about anywhere, including areas that you may never guess would hold fish. Look for current and structure in the form of rocks and sand bars, and keep an eye out for points of any kind, which are always key places to check. Don’t just fish the point, however, because fish often will be on one side of the point or the other. Also, look for deep sections in estuaries, rivers, beaches, and inlets that are within casting range and concentrate your efforts there. Fish hang out in deeper channels and come into the shallows to feed. A properly drifted eel will find itself naturally trapped on the sandbar next to the deep channel, making for an irresistible meal.

There are two main ways I fish eels: drifting and retrieving. That means I either cast and retrieve the eel, or I drift it in current. Depending on the area as well as the tide, you’ll likely find yourself doing one or the other.

When drifting an eel, I prefer to start just upstream on a shallower area that abuts a deeper channel. Casting roughly 45 degrees upstream allows time for your eel to dig down to the bottom. The current will then drift the eel the deep section and up onto the shallow sand bar as your line tightens in the current. The same method also works extremely well when a rip is present. Fish wait on either side of the rip in the calmer water hidden behind structure, waiting to ambush prey as it is carried through the rip. Cast accordingly in order to position your eel to flow through the rip, ending up in the eddy alongside the rip where you can retrieve it back toward you.

Eddies on the outside of current seams provide a break for fish swimming in heavy current as well as places for bait to rest. It is often a good idea to slowly retrieve your eel through these eddies after completing your drift.

The other way to fish your eel is to simply cast and retrieve it, similarly to how you might work a plug. If you let the eel sink before retrieving it, you will fish the section of the water column that you want. While I have caught fish on fast retrieves with eels, slow and steady should always be your go-to. Really, anytime you fish at night, you cannot reel slowly enough.

Another option is to pause your retrieve at any point and let the eel swim back to the bottom or give it a slight jig to lift it off bottom. You might be surprised how well a perfectly timed jig of an eel can trigger a strike.

Always fish with your rod tip up or in a position where it can be pointed toward a biting fish, creating slack in the line. Whether you are retrieving the eel or drifting it, you will not mistake the feeling of a hit. You’ll feel the eel squirm and bounce off rocks on the bottom, but a hit from a fish will feel like someone smacked the handle of the rod.

When I am drifting an eel through current and get a bite, I immediately drop my rod tip to avoid alerting the fish to my presence. As the line tightens and the rod begins to load, I reel down on the fish as quickly as possible until I feel its full weight. I then lift the rod into a fish-fighting position.

If I am fishing an area with less current, where I am retrieving my eel rather than drifting it, I have a slightly different approach. When retrieving an eel in a slower-current area, I feel the hit just the same, but find that lowering the rod might end with 10 seconds or more of slackline, meaning I then risk reeling in a deep-hooked fish. In these types of areas, I still lower the rod after feeling a hit, but not as aggressively. I like to think of it as feeding the eel to the fish while keeping just enough tension on the line to feel the weight. The hookset is then done as before, by reeling down on the fish.

A smaller fish often runs off with an eel before it’s able to swallow enough to catch the hook, which often results in missed fish. When a larger fish finds your eel, there will be no mistaking the shockwave sent up into your arm. The fish will inhale your eel in a single bite, and before you have a chance to lower your rod into position, your drag will begin to sing louder than it ever has before.