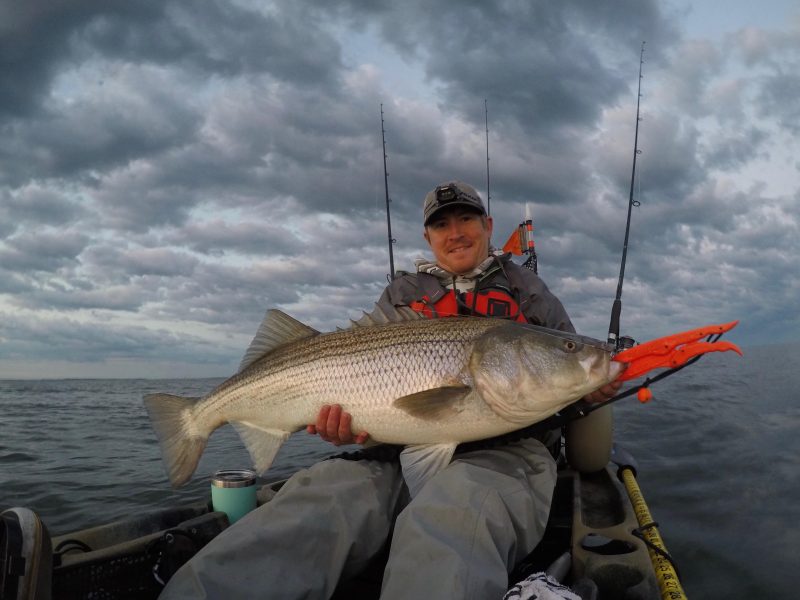 Mike Kelley holding a striper he caught from his kayak during the spring striper migration of 2020.

Stripers are a popular saltwater fish in the Northeast and mid-Atlantic region, particularly because they fight hard, grow to weights over 50 pounds, and a boat isn’t necessary. As an Atlantic migratory species, they swim hundreds of miles in the spring to spawn in tidal rivers and bays, making them accessible to shore anglers.

Migratory striped bass spend their summers in deeper and cooler waters off the coast of New York and New England. They complete their migration by swimming south in the fall to return to their ‘home’ waters in the mid-Atlantic region. Learning their patterns and behavior will help you find and catch stripers during the different seasons of the year.

When is the best time to fish for stripers?

From the beaches of southern New Jersey to the rocky shores of Maine, the best time to catch striped bass is from early April to late September. The mid-Atlantic region (New Jersey, Delaware, Maryland, and Virginia) is unique because they’re the first states in the northeast to see stripers in the spring, and the last in the fall when bass are migrating south for the winter.

In the summer months of July and August, stripers seek deeper ocean waters on reefs and ledges, where the water is cooler.

When stripers migrate in the spring and fall, they’re vulnerable because they attack and feed on large schools of bait, creating scenarios where multiple fish can be caught in a short amount of time. Breachways, inlets, points, reefs, bridges, mouths of rivers, and boulder fields are all prime locations to intercept migrating stripers.

Every spot and location fishes differently depending on the weather conditions, time of the year, wind, water temperature, moon cycles, tides, and bait in the area. Logbooks are an important tool for long-term success—they will help you understand why and how stripers feed under certain sets of conditions, making it easier to predict their patterns. A logbook can be a rudimentary notebook, or something more advanced, like an Excel spreadsheet.

What time of day should I go striper fishing?

There is no right or wrong time to striper fish. But you can put yourself in a better position to catch stripers by learning what time of the day stripers are feeding, based on conditions, bait, and their activity.

In the spring, stripers move onto muddy and sandy shallow flats, where the water temperature is warmer in comparison to the surrounding channels and cuts because of the sun’s daytime warming effect. Skinny cuts on the bottom create channels and chokepoints for feeding stripers.

How does the moon affect striper fishing?

Moon cycles can kick striper fishing into high gear, or it can mean the end of a consistent bite. Many people consider the new and full moons to be the best time to fish for stripers because they create strong ocean currents, which bass thrive in. Generally speaking, three days before a new or full moon, and the three days after produce the best fishing, because there is more vertical water movement.

How do tides affect striper fishing?

The moon’s gravitational pull causes a tide change every 6 hours and 12 minutes, creating low and high tides. Stripers are opportunistic fish, feeding whenever they can, especially at the specific time periods and windows during a tide.

Some locations fish best when the current is cranking, other spots are better around slack tide, when there is little or no current movement. Learning what stage of the tide a spot produces is crucial to catching stripers consistently.

How does wind affect striper fishing?

Learning how winds affect the behavior of stripers is an important component to finding and catching bass. A strong Nor’easter in late August and the fall can make stripers feed aggressively on schools of baitfish.

A hard blow can also shut down a striper bite because of decreased water clarity, particularly because the bottom gets stirred up, creating brown water and patches of weed and mung.

Where should I go striper fishing?

Understanding where to striper fish is crucial, particularly in part because stripers congregate in certain locations during specific seasons. In the early spring, striper fishermen and women primarily concentrate their efforts on creeks, estuaries, bays, and tidal rivers. As the spring striper migration progresses, bass swim in schools north, opening the window for surf and beach fishing. During the summer, stripers seek the cooler waters of New England because the bays, rivers, and estuaries contain lower levels of oxygen because of water temperature increases.

When stripers aren’t migrating or feeding in open water, they find pieces of “structure” to call their home. Reefs, ledges, boulder fields, points, jetties, and bridges are popular striper havens.

View our striper migration playbook to see some of the best times and locations to catch bass.

What is the ideal water temperature for striper fishing?

Bass can be caught during the winter in places where they ‘holdover’, until their biological instincts take over, telling them to migrate north.

What is the best surf rig for stripers?

High-low rigs are popular in the beginning and late stages of the season when schoolie stripers are abundant, allowing anglers to catch more than one fish.

A fish finder rig is best for slot stripers and large bass because the sinker slides up the line when the fish picks up the bait. The sliding weight keeps stripers from feeling the sinker, which can cause bass to drop a bait.

Live bait is a popular and proven method to catch striped bass because it’s what’s in their environment. Stripers are opportunistic feeders, meaning they will eat a variety of baitfish, shellfish, and marine organisms, depending on what’s available in the area.

Some days stripers will eat any live bait thrown at them, and other days, they’ll key in on one specific type of bait. In the northeast Atlantic region, some of the better striper baits are bunker (menhaden or pogies), mackerel, eels, bloodworms, sandworms, clams, squid, and porgy (scup).

When a live bait dies, many fishermen and women continue to fish, even though the bait has no physical movement. Another popular technique is to cut the bait with a knife into portions, then place the piece on a hook, referred to as ‘chunking’. Live eels and bunker are two of the popular nighttime striper baits.

A non-offset (inline) circle hook is required when fishing for striped bass with bait, whether it’s alive, dead, or cut. Using circle hooks for stripers bass reduces mortality rates by limiting instances of bass swallowing bait and getting hooked in the stomach.

The most difficult method to catch stripers is with a fly fishing rod because it requires a combination of knowledge, skill, precision, and patience. But of all the different methods to catch a striper, it’s the most rewarding way to catch bass because of the intricacies involved.

9-weights are multi-purpose fly fishing rods, ideal for New England stripers up to 40-inches, and will cover most scenarios. When fly fishing for trophy stripers, a 10- or 11-weight rod is preferred, but the downside is they’re more laborious to cast because a heavier line is needed.

Another popular method is to fool stripers by attaching an artificial lure to the end of your fishing line. Lures are designed to mimic the appearance, movement, color, and vibration of natural bait.  Some of the newest lures have built-in scents to entice fish into striking the bait.

Lures have many advantages in comparison to bait; they cast far, can be stored in a home or vehicle without the concern of odors, and can be worked at a variety of depths, speeds, and cadences.

Trolling a striper rig behind a boat or kayak is one of the best ways to catch large quantities and quality bass. Trolling for striped bass allows a boater or kayaker to catch multiple fish at once while covering a large area in a short amount of time. Bunker Spoons, Mojo Rigs, a Tube and Worm, and Umbrella Rigs are productive ways to catch striped bass trolling.

Video: How to Troll Mojo Rigs for Striped Bass

Large stripers move into shallow water after dark, giving shore and surf anglers a shot at big bass. Lure retrieve speeds are generally slower, but it’s important to experiment to see what the fish want. Bringing several flashlights is a must so you can see what you’re doing.

During the day, loud noises and boat traffic can make a school of stripers stop feeding, particularly in popular fishing spots. Finding your own spot with less fishing pressure at night can be the difference between catching and striking out. Boats are required to have navigational lights (green and red) to indicate the port and starboard side of the watercraft.

Kayak fishing for stripers is exhilarating, even for fishermen and women with years of experience. Kayakers have an advantage because they can access areas not regularly available to shore and boat anglers because of the size and mobility of their watercraft. Paddle kayaks are an option, or a pedal kayak will allow you to fish hands-free.

Some of the newest fishing kayaks come with built-in electronics, making it possible to not only see stripers below the boat with traditional sonar. but also to the peripherals with new side-scanning technology.

Stripers are unique because they can be caught from shore, unlike tuna, Mahi, and other offshore fish. Lures, flies, surf rigs, and live bait are the four most popular surf fishing methods for stripers. Surf fishermen and women often wear waders to access deeper water, allowing them to stay dry, and make long-distance casts when necessary.

Even though the latest surf fishing gear will allow you to make long-distance casts, stripers often hold tight to the beaches in the troughs and wash where vacationers stand in the summer months.

A longer fishing rod (9- to 11 feet in length) makes it easier to cast long distances and it shortens the battle when you’re reeling in a striper.

In the surf, stripers actively search for food at sandbars, troughs, holes, points, and cuts. These areas stand out because there is a change in the contour of the bottom, creating a prime feeding scenario because of the current change and turbulence. Taking time to find these areas during low tide pays tremendous dividends.