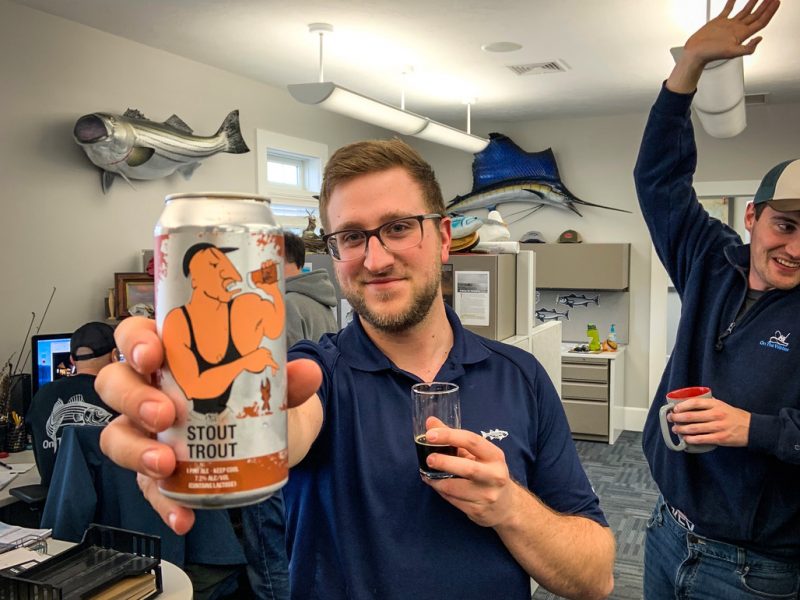 First off, this is one of the most bizarre designs for a beer label that I’ve ever laid eyes upon. It depicts a greasy-looking, muscle-bound, tank-top-wearing hipster swilling a beer while holding what I assume is a small brown trout. Perhaps the designer created it while drunk? The image leaves the viewer with more questions than answers… 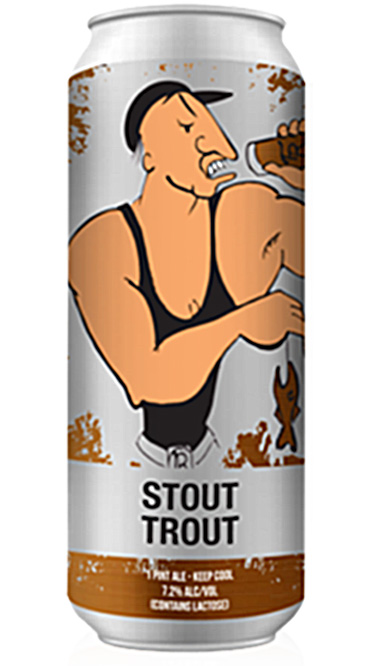 Trout River Brewing Company was one of the original players in Vermont’s craft beer movement. Founded in 1996 by Dan and Laura Gates, it was sold to its current owners in 2014, who have since expanded operations and moved the brewery to Springfield, VT. They offer a vast variety of fishy-themed brews that are based on traditional style ales, onto which they add a personalized touch.

We recently sampled their Stout Trout, which we found to be quite unique, and much different than a traditional American stout. It does not claim to be a milk stout, though the label clearly indicates it contains lactose, so I’m guessing there might actually be some milk in there.

Milk stouts are nothing new, they’ve been around for over 100 years, but most beer drinkers are unfamiliar with them. They are brewed using a similar method as regular stouts, with the inclusion of a small amount of milk, which brings sugars and lactose to the party, creating a smooth, full bodied, rich-flavored brew with a slightly viscous mouthfeel.

Overall, this beer scored very well for a stout. It has a beautiful dark brown color and pours with a thin, white foamy head that dissipates quickly. The aroma had hints of dark chocolate, roasted coffee and a bit of nuttiness. It was full-bodied, very smooth, with just a touch sweetness, but not malty.

This is a serious beer that should not be wasted on someone who does not appreciate serious beers.

COMMENTS:
“Would be perfect by a fire on a cold winter night.”
“That’s the best label I’ve seen so far.”
“Definitely a sipper.”
“Not a boat beer.”

Special thanks to OTW reader Tony Ferragamo for bringing us these tasty treats!