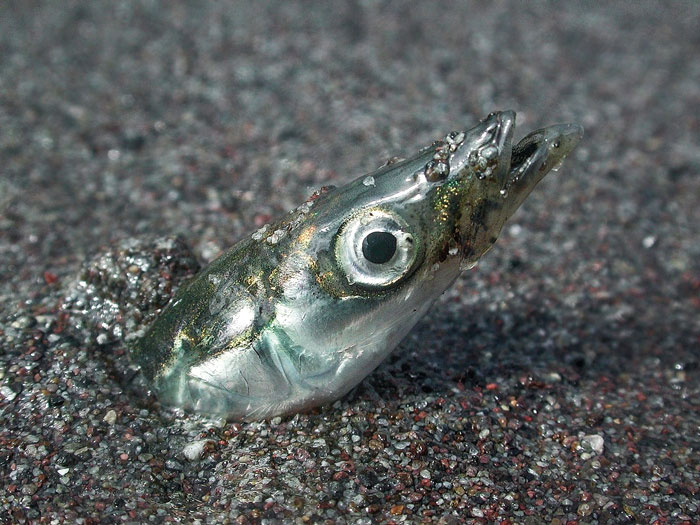 “Find the bait, find the fish.” From trout to tuna, the mantra is the same throughout the fishing world. Off the Northeast coast, perhaps no forage fish is more universally snacked upon than the lowly sand lance—two species, Ammodytes americanus and Ammodytes dubius—referred to by anglers as “sand eels.” Where these elongated little fish abound, the ocean comes alive with hungry predators: stripers roving the water column, giant bluefin tuna grazing along the surface, and humpback whales bubble-feeding as shearwaters, terns, and other seabirds circle above.

Despite their apparent central role in the ecosystem, scientists are still learning much about this species, including aspects of its basic biology and factors that can lead to the dramatic year-to-year fluctuations in abundance that anglers are all too familiar with. Researchers at the Stellwagen Bank National Marine Sanctuary (SBNMS) in Massachusetts, along with numerous scientific partners in the region, are working to change that.

From Anecdotes to Hard Data: Linking Sand Lances to Predators

“Our interest in sand lance began in 2013, when Stellwagen Bank, usually full of life, was virtually a barren desert—no whales, no birds,” explained Dr. Tammy Silva, a postdoctoral researcher at the SBNMS. “Scientists, along with whale watch captains and fishermen, had long suspected that sand lance are an important ecosystem driver in the Gulf of and Maine and along the entire northeast continental shelf.” Until recently, however, little data existed to support that claim.

Partnering with the United States Geological Survey, Silva and her colleagues have spent the past seven years sampling 44 sites within the Sanctuary to link sand lance abundance to that of predators. Sailing each spring and fall aboard the Sanctuary’s 50-foot research vessel, the R/V Auk, the team counts sand lance by taking a sediment sample of sand from each site, because when sand lance aren’t feeding in the water column, they bury themselves—you guessed it—in the sand. At the same time, the researchers assess the abundance of whales and seabirds at each site, and they are finding that their abundance is closely coupled with that of the sand lance.

The ongoing site sampling work is just one aspect of the research that Silva and her partners are undertaking to characterize sand lance life history and population dynamics. Using data collected aboard the R/V Auk, collaborators at the Woods Hole Oceanographic Institution are working to model ideal sand lance habitat (sand grain size, temperature, salinity, etc.) and to define the relationship between sand lance and the various plankton that they feed on, such as copepods.

“Findings from this work can help us better characterize how changes to habitat and food availability can affect the sand lance population and distribution in the region from year to year—a concept we call source-sink dynamics,” Silva said. The Bureau of Ocean Energy Management is providing funding for this research in order to better understand the productivity and value of sand habitats, which have received little attention in the past.

In addition, just as they did with seabirds and mammals, Sanctuary staff are working to learn how sand lance distribution and abundance is tied to that of fish predators. With assistance from Dr. Kevin Stokesbury at the University of Massachusetts Dartmouth’s School of Marine Science and Technology, the researchers are using underwater video surveys to see how closely species like cod and haddock associate with sand lance schools.

“Our preliminary data show that these predators tend to co-occur with sand lance, although we still have a lot of research to complete,” Silva said. This sort of work is vital because, while no commercial fisheries currently exist for sand lance, evidence of their key ecosystem role and importance to valuable species can help protect them from such exploitation in the future.

What Will the Future Hold?

A major focus of the Sanctuary’s sand lance efforts has been assessing how the species—and by extension, the predators that depend on it—will be able to cope with the effects of climate change. The Gulf of Maine is warming faster than 99% of the marine areas on the planet, and as the ocean absorbs more carbon dioxide, its chemistry will change—a process known as ocean acidification. Lab-based research conducted at the University of Connecticut in conjunction with Sanctuary staff has shown that sand lance embryos are extremely sensitive to ocean acidification, with survival reducing by nearly 90% for acidification levels that could occur by 2100.1 Furthermore, because sand lance prefer very specific sand grain sizes and depths, if the location of their plankton prey shifts due to climate change they may not be able to follow, causing ripples through the ecosystem. The team is continuing to look at how further warming and acidification could influence future sand lance abundance and distribution.

In the shorter term, and in rosier news, Silva notes that while 2019 was a year of low adult sand lance abundance on Stellwagen Bank, the researchers did catch a high number of young-of-year specimens.

“Tracking this year-class will be really important for understanding what factors influence this species’ boom and bust cycles,” she said. “We’re thinking that 2020 could be a big year for sand lance and their predators on Stellwagen.”

By the time this article hits the web, anglers will already have a sense of whether her prediction has become a reality.