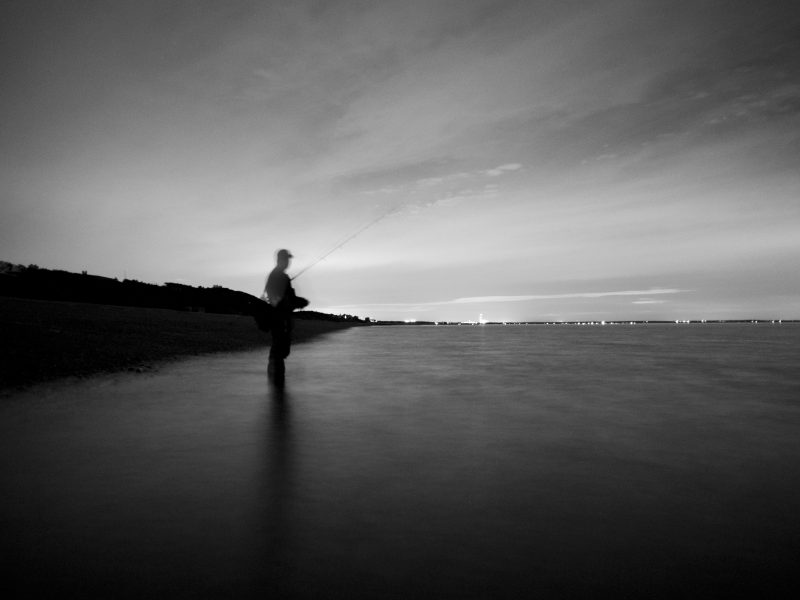 Last year around Halloween, we posted Ghost Stories of The Surf, and our readers shared some scary fish stories of their own in the comments section. Here are some of our favorites.

Strangers in the Fog
From “Mike The Truth”

I peered out my window that October night. The fog had settled over Eastern Long Island, and I could barely see past the window itself. Although I hesitated I still did not let the “soup” deter me from wading into Moriches Bay and fishing that night.

Driving to the Coast Guard station was slow and hazardous. Visibility was zero.

The night was still and the lack of any visible moon lost in the fog gave it a darker than black feel. That coupled with the fact I could not see my outstretched hand began to unsettle me and get my mind to wandering.

I shook the tragedy from my mind as I entered the dark swirling water. Ever so slowly I waded out to chest level and proceeded the hundred yards to my spot.

As I arrived I prepared to fire off my first cast when I turned to my right coming face to face with a man no more that three feet away. We looked at each other and screamed simultaneously. They must have heard us for miles. When we regained our composure we had a good laugh. After we introduced ourselves we began to fish. I asked him what he thought of the fog. “I actually enjoy it quite a bit,” he said. I then asked him if he was from the area. When he didn’t reply I turned toward him. But he was no longer there. I fled the water that night. And I never fished there again.

My dad used to tell a story of drinking with some of the Coast Guard guys who manned a lighthouse on Long Island Sound called Execution Light. When we fished out there you could see rings attached to a rock that was only visible at low tide. The story is that pirates were chained to that rock at low tide and left to drown. The guys who manned the light, back in the day, claimed they could hear screams at night when the tide was coming in.

I was fishing the first beach at Sandy Hook in Jersey one late September. When I got to the parking lot and not another car in sight. I set up, soaking clams on two rods before sun-up. As the pre-dawn light began to show over the horizon, a THICK bank of fog rolled in. Slack tide and zero wind…very peaceful but not expecting anything spectacular.

Suddenly, about 500 seagulls that had been resting on the roof of the bath house lifted into the air and began to dive nosily into the surf. The fog was so thick I couldn’t see them, but I could hear them, not 20 yards off the beach. Figuring a blitz of snappers, I sent a 3-ounce Yo-Zuri popper into the fog and immediately came tight on what turned out to be a 12lb Albie. As I was fighting this fish, the fog began to lift and I could see I was surrounded by 25 to 30 other surfcasters. I had no clue how they suddenly appeared as this stretch of beach is wide open, so I would have seen them before the fog came in. No one spoke and the only sounds were screaming gulls and drags as we all enjoyed a rare mix of blues and albies for the next 30 minutes in a classic fall blitz.

As the action died down, the fog rolled in again and I appeared to be all alone again. Since I was tired and a little spooked by the mornings events, I packed up my gear and headed back to the parking lot. Just like when I arrived, mine was the only car there. I have no idea where the other fishermen came from or how they disappeared and to this day, I’m not entirely convinced they were actually there.

Was out fishing after midnight. Me and a friend had a couple of fish on shore. We decided to leave because the fog was getting thick. When we went to grab the fish, they were gone! Time to run! Not a soul in sight!