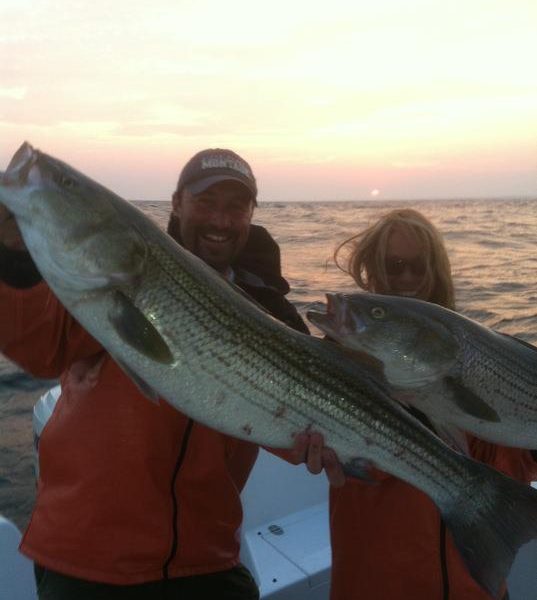 LESIONS ON STRIPED BASS IN MASSACHUSETTS WATERS ARE NOT MYCOBACTERIOSIS

During this past spring and summer, the Department of Fish and Game’s Division of Marine Fisheries (MarineFisheries) received numerous reports from anglers of skin lesions on striped bass.  The general condition reported was red spotting visible along the sides of the fish.  Lesions such as these can be indicative of the presence of the disease mycobacteriosis, which is common in southern waters, especially Chesapeake Bay, but has not been documented in Massachusetts waters.  Many members of the fishing community expressed concern that it appeared that mycobacteriosis had reached Massachusetts.

Mycobacteriosis is a generic term that describes diseases caused by a group of bacteria known as Mycobacteria. These types of bacteria are widespread in nature, particularly in aquatic environments. A small fraction of mycobacterial species causes disease in animals and humans.  A newly described species of mycobacteria, Mycobacterium shottsii, is the type most commonly associated with the current outbreak of mycobacteriosis among striped bass in Chesapeake Bay.  The disease is characterized by external and internal lesions that can kill the infected striped bass, thus the initial concern that the disease had reached Massachusetts.

MarineFisheries staff initiated a study to characterize when and where the lesions occurred and to determine if the lesions were caused by Mycobacterium.  The prevalence was generally low (<5%) in most areas of state waters but higher in certain areas including Martha’s Vineyard, Cape Cod Canal, Buzzards Bay, and Boston Harbor.  Lesions were seldom seen in striped bass off Chatham, where the commercial fishery was centered during July-August.

Many striped bass from both the recreational and commercial fisheries were examined internally and none had lesions within the spleen, the hallmark of mycobacteriosis.  In addition, bacterial cultures from the skin lesions did not produce any Mycobacterium.  Therefore, the conclusion of this study is the skin condition seen in striped bass in Massachusetts waters this summer was NOT mycobacteriosis.

Lesions on the skin of striped bass are a relatively common occurrence and have many causative agents.  The elevated prevalence seen in some areas this year may be associated with the anomalously high spring and summer water temperatures seen in Massachusetts and more southerly waters.