On Thursday, June 2, 2016, Massachusetts Environmental Police Officers on a marine patrol boarded a New York registered vessel that was actively fishing in the vicinity of Scraggy Neck in Bourne. Once onboard, officers conducted an inspection during which an overage of black sea bass was observed. Officers then escorted the vessel back to shore so that a dockside inspection could be conducted. 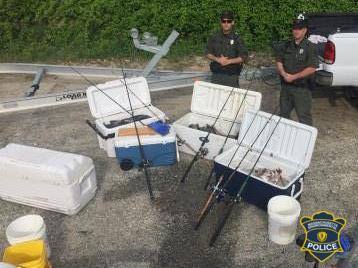 At the same time, a Massachusetts Environmental Police Lieutenant was responding to a marine fisheries complaint at Barlow’s Landing. Massachusetts Environmental Police dispatch received a complaint indicating that a vessel had come in to offload several coolers into a pickup truck and head back out to sea. The responding Lieutenant discovered that the truck belonged to the owner of the vessel that Officers were currently escorting back to shore.

The vessel owner denied returning to shore and offloading fish into his vehicle. Officers subsequently conducted an inspection of the vehicle and found two coolers containing black sea bass.
A full inspection was conducted, upon which it was found that the vessel owner and passengers were in possession of 143 black sea bass, 84 of which were undersized, and 60 scup, two of which were undersized. The operator was issued criminal summonses and the fishing gear was seized. The fish were sent to a processing center and will later be donated to a local charity.

Thursday’s bust follows two recent reports of black sea bass poachers caught with 219 sea bass on May 29 in Wareham and a May 18 bust in Mattapoisett.