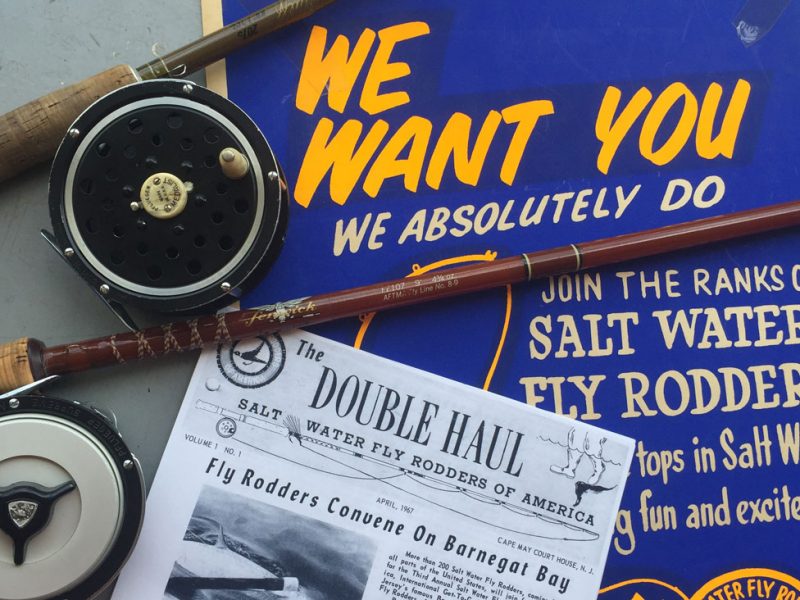 In the 1950s, saltwater fly-fishing took off like a fighter jet. That was when pioneers like Joe Brooks, Bill Curtis, George Hommell, Ted Williams, Jimmy Albright, J. Lee Cuddy, Dr. Web Robinson and Stu Apte started getting a lot of attention in sports magazines with their amazing catches of bonefish, snook, tarpon and billfish; however, it was Barnegat Bay and striped bass that brought the sport into the range of the Average Joe fly-fisherman. While the Florida Keys retained the glamour of saltwater fly-rodding, catching saltwater gamefish on the fly shifted dramatically to local hotspots in the early 1960s with the formation of the Salt Water Fly Rodders of America. Fly-fishing in coastal bays and rivers changed the sport from a wealthy man’s hobby, and striped bass brought fly-fishing within anyone’s casting range.

In the early 1960s, Barnegat Bay was home to a tremendous population of overwintering striped bass. Some biologists of that time thought the Toms River actually held a small but locally important spawning population. True or not, as the bay’s waters warmed from March through May, thousands upon thousands of 16- to 20-inch juveniles provided amazing opportunities for saltwater fly-fishing. The late Pete McLain, former Deputy Director of New Jersey’s Division of Fish and Wildlife (and an avid writer, photographer and filmmaker), credited Howie Hollenback, a former Florida Keys guide who traveled north in 1958 to work as a dock master at a Toms River marina, with showing several local fishermen how to fly-cast and catch fish in the many miles of tidal Barnegat Bay. 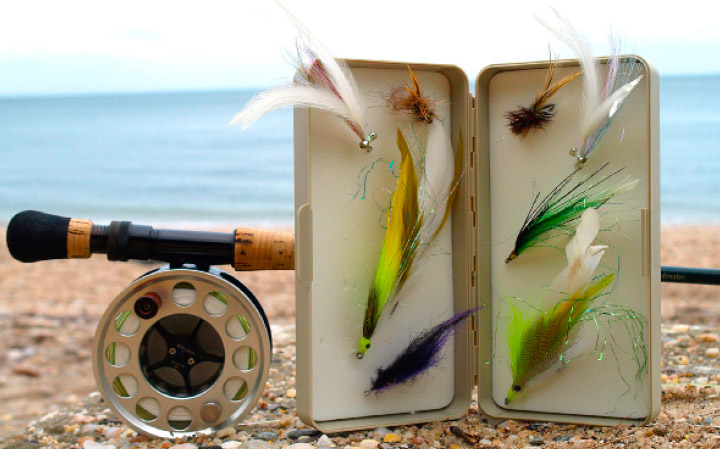 According to McLain in an article he wrote about fly-fishing in Barnegat Bay, Elwood “Cap” Colvin, owner of Colvin’s Bait and Tackle in Seaside Park near the entrance to Island Beach State Park, caught his first fly-rod striped bass in the spring of 1960; by 1962, the striped bass explosion was at its peak. The big bay was bursting with 3- to 9-pound fish, and Colvin and McLain (along with other local flyrodders like Fred Schrier, Ed Morrison, Butch Colvin and Mark Sosin) joined in on the fun. Eventually, about 20 or so fly-rodders were meeting informally at Colvin’s tackle shop for coffee and to swap ideas about tackle, rigging, knots, techniques and developing their casting skills.

These informal gabfests became vitally important to the early development of saltwater fly-fishing by opening the door to innovative problem-solving. Just about every salty fly-fishing situation back then needed a solution. Sweetwater rods and fly line tapers meant for trout were inadequate at catching striped bass and new, creative techniques had to be found. The fog of uncertainty had to be cleared so that other fishermen who wanted to take up saltwater fly-fishing could join in. Many would-be fly-anglers didn’t know how to start but wanted to be in the game. By 1965 – and with a big organizational push by Fred Schrier—the informal gatherings officially became incorporated as the Salt Water Fly Rodders of America. Appropriately, Cap Colvin was elected as the first president.

From the get-go, sharing information, developing casting skills and swapping fly-fishing techniques was the cornerstone of the fledging organization. In the spring of 1965, the SWFROA (nicknamed Swafra by members) held its first annual Get-Together and attracted many enthusiastic fly-anglers. The event featured local fly-anglers, and also attracted notable fly-fishermen from Rhode Island including Al Brewster and Harold Gibbs, who had formed the first official saltwater fly-fishing club two years earlier in 1963, the Rhody Flyrodders.

By the mid-60s, the bass population in the Bay began to dramatically decline. In 1968, the Get-Togethers shifted to the Chesapeake Bay at the Wye Institute, an elite boys camp near St. Michaels, Maryland, and then in 1969 to Tilghman Island. At the time, I was a young man recently employed by the Garcia Fishing Tackle Company. I attended both events and enjoyed the extraordinary experience to meet and learn from the pioneers of the day … and to catch striped bass and sea trout in new waters.

Other SWFROA venues included Shelter Island, New York; Key West, Florida, and Nags Head, North Carolina. Local chapters also held their own events. The Rhody Flyrodders had an event where I met and fished with a unique band of fly-fishers including Al Brewster, Ron Montevcalvo and Armand Courchaine, who became a lifelong friend. I still swap stories and fishing info with him. Standing on the big boulders in the Newport surf was quite an experience, and so was the chance to learn some fly-tying and saltwater fly-fishing techniques.

For saltwater fly-fishermen, it was a time of boundless enthusiasm and many of us were eager to join the new group, and we did so by forming chapters of the “national” organization. Chapter 1 was based, of course, in Seaside Park where the SWFROA was first started, and other chapters soon formed. Chapter 2 was based in Avalon, New Jersey, under the guidance of noted fly-tier and pioneer fly-angler George Cornish. After visiting the first Get-Together in 1965, Harold Gibbs and Al Brewster returned home to Rhode Island and spoke so highly of their experiences that the Rhody Flyrodders became affiliated as Chapter 3. A group of flyrodders in Philadelphia became Chapter 4, then Chapter 5 was soon formed in Norfolk, Virginia. In 1966, Neil Druger, Dom DeSalvo, Erwin Zobel and Hammond Fox formed the Salty Flyrodders of New York as Chapter 6. Other chapters formed in Plum Island, Massachusetts; Plainfield, New Jersey; Chesapeake Bay; southern California; and Maxwell Garth even formed a chapter in Australia. The SWFROA had become international in scope and made a slight name change to Salt Water Fly Rodders International, although most members continued with the Swafra nickname.

Individual salty fly-anglers could also join as Associate Members, which qualified them for all benefits, an invitation to the annual Get-Together, guest attendance at chapter meetings, and a subscription to the organization’s magazine, The Double Haul. Tackle shops displayed posters proclaiming, “We want you, we absolutely do,” and George Cornish developed portable fly-tying stations that clubs could borrow to use to teach fly-tying skills. Chapters offered fly-casting lessons, enthusiasm was high, and interest in saltwater fly-fishing grew at a rapid pace.

Prior to 1965, world-record catches on fly tackle had no uniformity and everyone fished to the guidelines of local fishing clubs. Variation in requirements for tippet pound tests and lengths was considerable, but that changed when the SWFROA formed a committee headed by Mark Sosin to come up with a standardized set of rules and regulations. Mark used the prestigious Rod and Reel Club of Miami’s fly-catch rules as a starting point, refined them with input and comments from other notable saltwater fly-anglers, and developed a set of rules that is still in use today under the auspices of the International Game Fish Association.
Among the earliest recognized SWFROA records were Joe Brooks with a 148-1/2-pound tarpon, Dr. Webster Robinson’s 145-pound striped marlin, Stu Apte’s 58-pound dolphin, and a California-caught striped bass by Russ Chatham at 36 pounds, 6 ounces. Based on the tackle of the time, these early records were truly astonishing feats of angling skill.

By the mid-1970s, SWFROA experienced growing discord between its members in the mid-Atlantic and Northeast (where fishing stops for the winter) and those in the south, particularly Florida, where the fishing never ends. An effort to expand the board of directors to gain better balance between the two areas helped, but by 1977, the fire had dwindled to embers and the group disbanded. It was a wonderful, exciting run of twelve years and a lot was accomplished, but fate intervened. In 1978, the IGFA agreed to take over the salty fly record program, and that closed the door on the SWFROA.

Three of the original chapters still survive. The Rhody Fly Rodders celebrated their 50th anniversary in 2013. Club member Peter Nilsen wrote Rhody Fly Rodders; Fifty Years, Fifty Members, Fifty Flies to commemorate the event (write him at 75 Massasoit Ave., Barrington, RI, 02806 – it’s a great book). The Salty Flyrodders of New York also persevered and grew, and celebrated their 50th Conclave gathering in 2017. That club continues to have a strong, vibrant membership dedicated to fly-fishing in the salt. After a ten-year lapse, a new fly-fishing club emerged from the cinders of the original Chapter 1; by 1987, New Jersey fly-anglers met for several years at Bob Popovic’s house. The informal fly-tying and casting meetings outgrew Bob’s home, and in 1992, the new club eventually formed as the Atlantic Salt Water Flyrodders.