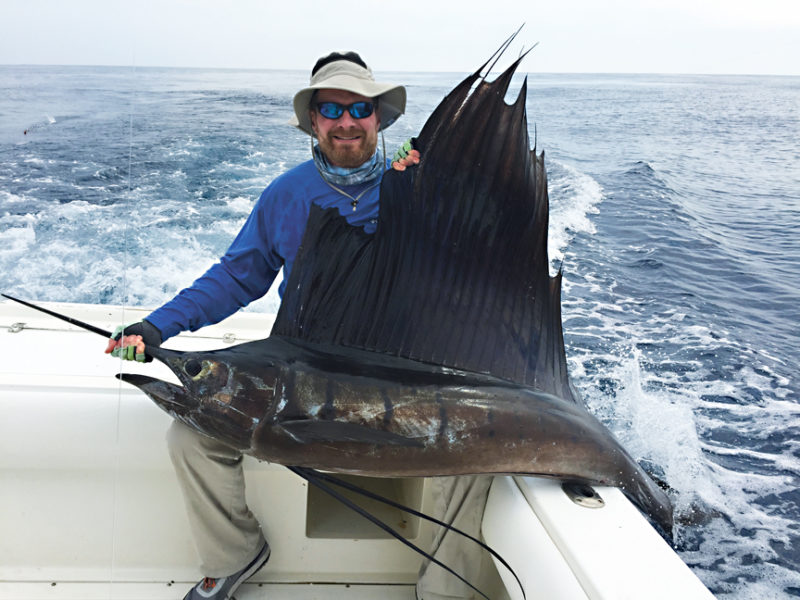 If you want to catch large numbers of large sailfish there is no better place on the planet than the pacific coast of Guatemala. A recent trip to the Pacific Fins Resort in Iztapa, Guatemala gave me the opportunity to experience firsthand why so many place Guatemala at the top of their fishing bucket list. In conducting my pre-trip research I kept coming across fishing reports that contained numbers which seemed impossible, but after catching and releasing 74 sailfish in three days of fishing, I’m a believer!

Getting there: The typical fishing trip to Guatemala entails 3-days of fishing sandwiched between two days of travel, one day to get there and one to get home. From Boston’s Logan International Airport it’s a three-hour flight to Miami and then another three-hour flight to Guatemala City. Upon landing and quickly making my way through customs, the team from Pacific Fins had a greeter holding a sign with my name on it. After meeting my driver, Samuel, I was quickly whisked away to an air-conditioned van containing a cooler iced down with my beverages of choice. The drive from the airport to the resort takes about two hours. As we drove through the small villages and towns along the way, I was struck by two things, the abject poverty that many Guatemalans live in, and the incredible sense of community that exists within these small towns. The town roadsides are lined with street-food vendors that reminded me of an episode of “Bizarre Foods” with Andrew Zimmerman. Open fire pits and grills roasting fresh meats and seafood with handmade tortillas lined both sides of the road. The whole scene becomes very festive once the sun begins to set, lots of smiles and laughter with the smell of grilled meats and fresh seafood being cooked over open fire pits.

The Lodge: Pacific Fins is a small resort that only caters to approximately 20 fishermen at a time. Owned by Niels Erichsen and adeptly run by the management team of Joel and Rosandro, Pacific Fins offers a true lifetime experience. With the top fishing captains and crews in the area combined with a great resort that has incredible food, drinks and personalized service this is a world class operation. 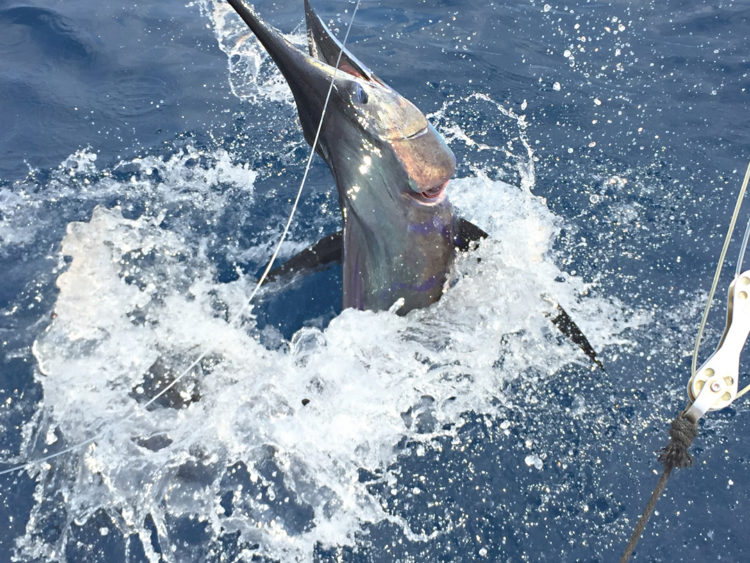 The Fishing: Every morning after breakfast the vans departed at 6:45 am for the 15-minute ride to the Marina. We were boat and heading to the fishing grounds by 7:05 am. Depending on where the captain chose to fish, the run to the “drop off” was anywhere between 60 and 90 minutes. I was amazed at the amount of wildlife we encountered on our daily trips out. Humpback whales, large pods of spinner dolphins, porpoise, sea turtles, schools of flying fish and the list goes on. I felt like I was watching an episode of Wild Pacific on the Animal Planet.

I fished all three days with Captain Rolando on the Aguardiente, a 35-foot strike with Cummins 375 diesel engines. Aboard were a couple of very experienced deckhands in Jose and David. For gear I fished both conventional and fly. For conventional equipment we fished Shimano TLD 25 reels on Penn International Rods. For fly gear, large arbor Abel reels on Temple Fork Outfitters TiCr2 8.5 foot 12- to 14-weight rods. Standing by in the wings was a Shimano Tiagra 50 with 150-pound-test line on a Penn Tuna Stick baited with a full-size mackerel or bonito, just in case a marlin made an appearance. The bait of choice for sailfish on conventional gear was ballyhoo, and large pink flies with a white and pink foam popper head on the fly rod.

Once we reached the drop-off, the crew would rig up squid teasers with ballyhoos on outriggers, and four rods with Ballyhoo baited hooks. Once we began trolling, the action would typically start within the first 10 minutes. The trolling raised the fish from the depths and put them in pursuit of the teasers. Once we spotted a fish chasing the teasers the fun began. 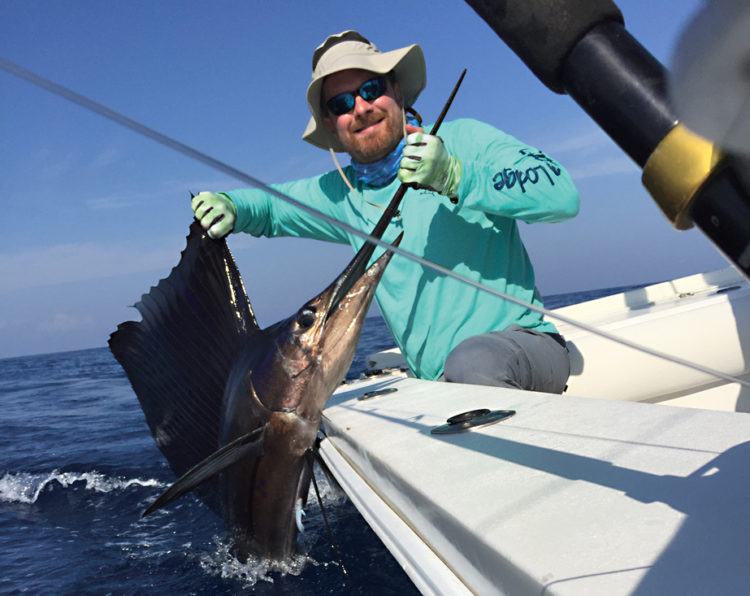 David or Jose would begin to reel the teaser in drawing the fish closer into the stern at which point I would drop back a bait to the fish. With the teaser retrieved and out of the water I would begin coaxing the fish with the ballyhoo or fly. Sometimes the hook up occurred immediately, other times it would take a bit of convincing. This style of fishing was measured by three important numbers that the captains report out at the end of each day, number of fish raised, number of fish hooked and number of fished landed, and the numbers coming out of Pacific Fins were legendary. In my three days of fishing, we raised 138 fish, hooked up with 103, and I landed 74 sailfish between 80 and 160 pounds. Also in the mix were two marlin, a blue and a striped. We hooked up with the blue marlin, a huge fish that the captain estimated to be north of 300 pounds. Unfortunately, after about a 10-minute fight that included several jumps and the fish nearly spooling me, I lost the big one. Although the captain did a great job of chasing the fish with the boat, once she made a hard right turn of the starboard side of the boat the leader snapped. All I have left to show for my efforts is the broken leader that the crew neatly coiled and handed to me as a reminder of the one that got away.

Those who like to travel and fish know all too well the risk of spending a decent chunk of change on a trip and potentially getting skunked. However, at the right location and with the right company, even slow days of fishing are fun. This is what the Pacific Coast of Guatemala offers, the high probability of catching eye-popping numbers of sailfish, day after day on the water. Since returning and sharing the stories and photos with family and friends, the most common response I get is, “When are you going back?” and “Count me in!” For this fisherman, the Pacific Coast of Guatemala will forever be the only place to visit when I need to get my sailfish fix. 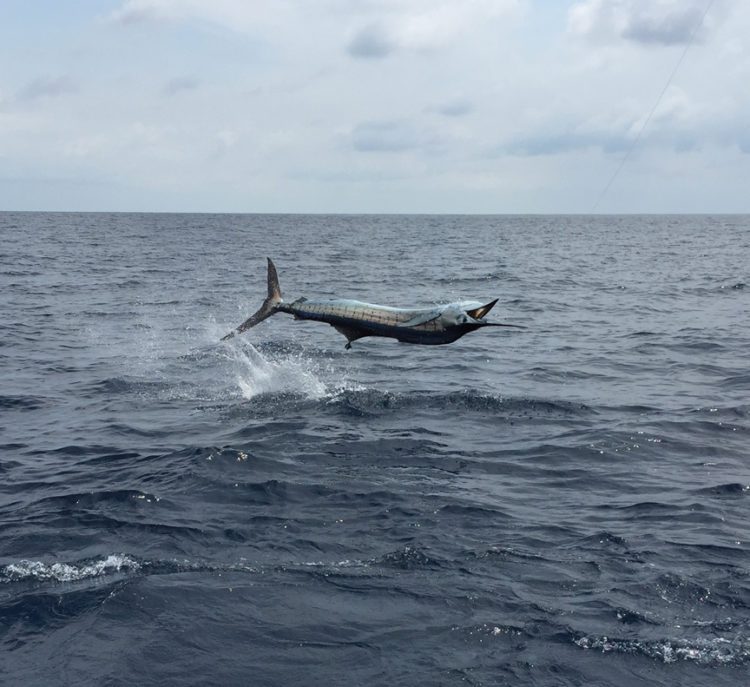