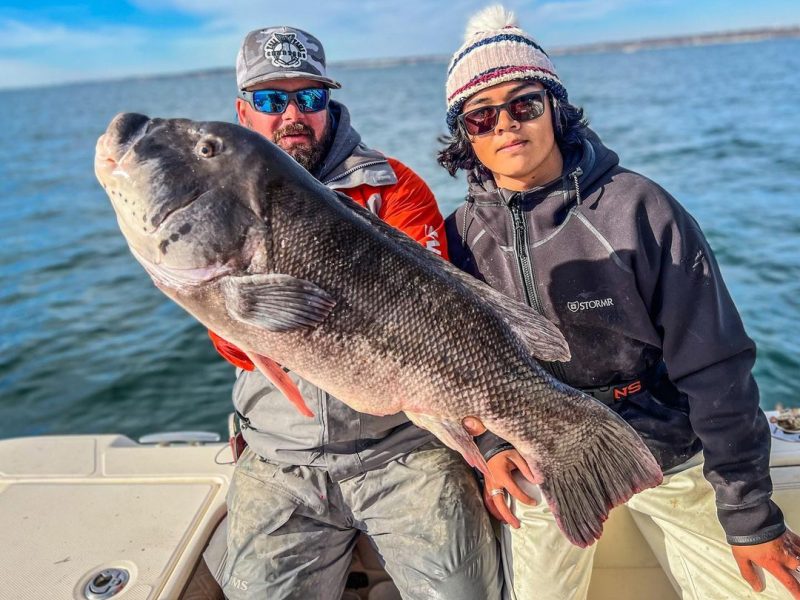 Running fishing charters out of Newport, Rhode Island, MacLeod has one objective: to make his clients happy by putting them on fish.

Recalling his memorable trip on Sunday, Nov. 7, MacLeod jokingly said Newman brought a million rods with him from New Jersey. The Capt. had to inform the teenager that he couldn’t bring them all on the boat. Newman went through his rods and decided he wanted to use a light rod, but Capt. MacLeod suggested he go heavier, as they were targeting big tautog, a strong-willed fish that draws comparisons to a bulldog.

Tautog experts say hooking a large fish is half the battle. The other half is a nerve-wracking tug of war to keep the fish off a wreck or rock pile, where they like to spend most of their time.

Before they began fishing,  the crew encouraged Newman to participate in the common boat tradition of throwing money in a winner take all pool for the largest fish. Newman declined, saying he’d rather save the $2o for McDonalds.

Around 9 am, MacLeod motored to a tautog fishing area he’d been targeting often. The water read 59 degrees on the Raymarine fishing electronics, which is a chilly temperature for humans, but not for tog. In fact, MacLeod and other captains fish for tautog through the winter when the fish transition to deeper water as the temperatures drop.

MacLeod had already heard of a tog coming in around 20 pounds from Rhode Island earlier this fall. The tide was ebbing, meaning the waterline was dropping towards low tide. The current began to peak as the crew dropped their Snafu Rigs tipped with small green crabs to the bottom, where jumbo tog lie in wait.

As the crew started to see a progressive increase in the size of the tog being reeled in, they switched to whole spider and white crabs to draw in the attention of the feistier and larger fish. The crew boated a 10 pounder and dropped what MacLeod thought was a tog in the 15-pound range.

Newman dropped the Snafu Rig to the bottom and said he was stuck in the rocks. But then there was movement, signaling a large tog swallowed the white crab and was burying itself in the rocks. The teen from New Milford slowly cranked down on the reel, getting the stout tog  20 feet up from the bottom, until it ran back to the rocks like a striped bass. The back and forth battle continued four more times until the gigantic fish reached the surface.

After realizing the sheer size of the tautog, MacLeod wisely suggested, “You can do whatever you want, but I recommend we bring it to a certified scale.”

Dressed head to toe in fishing gear, Newman and MacLeod made their way to a certified scale at Stop & Shop in Middletown, Rhode Island. After preserving the weight of the fish in water, the tog hit the scales where it read 21.57 pounds, a new Rhode Island state record.

MacLeod isn’t satisfied though—he firmly believes there is a bigger tog swimming off the coast of Rhode Island, waiting to be caught on one of his charters.

Warning: Explicit Language Contained In The Video Below