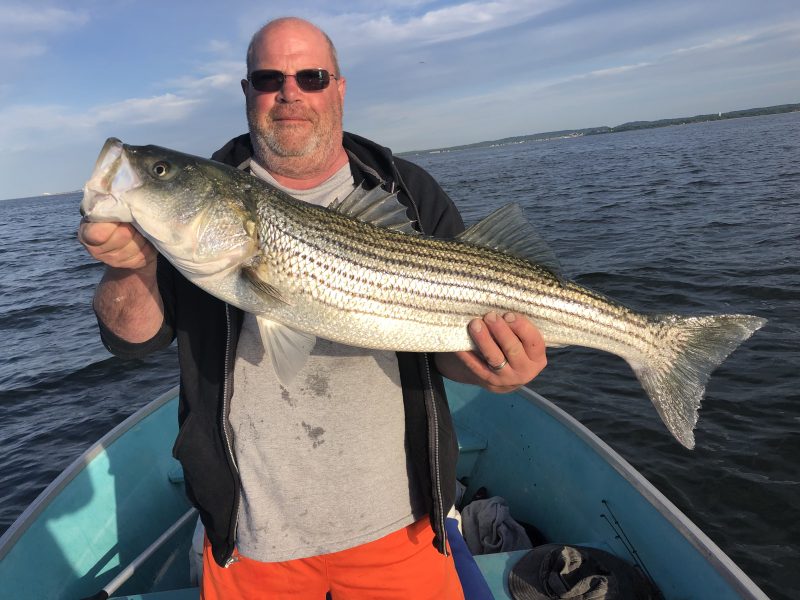 Striped bass are anadromous, and spend most of the year in saltwater, but when it’s time to spawn, they seek estuaries. Every year in March, stripers begin their journeys west, headed for freshwater creeks and rivers, feeding along the way. Every spring, stripers of all sizes gather in Raritan Bay, and while waiting for the right time to spawn in the Hudson River, they gorge themselves on adult bunker and other baitfish.

Beginning in early April, anglers in 20-foot-plus boats will report catching big stripers, but you don’t need a larger boat to enjoy this fishery. On the right days, a 14-foot tin boat can be all you need to get over the bass.

Raritan Bay is bordered by Staten Island to the northwest, Perth Amboy, New Jersey, to the west, and Monmouth County, New Jersey to the south. The bay features a vast area of flats and dark mud bottoms, allowing the bay to warm up faster in the springtime in comparison to the surrounding waters. In the spring, baitfish congregate in the bay waters, attracting stripers and bluefish.

Most of us have seen bright, beautiful days end with dark wind-blown waves. Spring weather on the Raritan can turn ugly, so be sure to study the forecast before hitting the water. There will be many flat-as-glass days in April and May, and any small boaters hoping to target spring stripers there should be ready to pounce on these weather windows.

Toward the end of March, the shallower waters along the edges of the bay, called the “flats,” generally produce the first short bass each year. During a sunny afternoon on an ebbing tide, these waters tend to be warmer than the deeper center of the bay. They are only 5 to 15 feet, but attract the first bass each spring.

While cruising these areas with an eye on your fishfinder, you’ll see countless schools of bunker, some of which could be holding bass beneath them. While the bunker schools read as fuzzy clouds throughout the water column, stripers tend to show as individually defined arches. I check out the shallower flats first, trolling a shallow-diving minnow lure like the Daiwa Salt Pro Minnow in a bunker color.

Some years, such as Spring 2020, striped bass bypass the flats and congregate in slightly deeper waters of 15 to 30 feet along contour changes—still well within the reach of smaller boats. In these regions, I start trolling deeper lures or, if I mark a good school of bass, I drop down a jig or swim shad.

Medium-action spinning rods to cast poppers swimming plugs, and jigs are the go-to outfits when fishing Raritan Bay from a small boat, but on days when the bass are finicky, a pair of trolling setups can save the day.

A 7-foot, medium to medium-heavy conventional rod matched to a lever-drag conventional reel spooled with 30- or 40-pound braided line will cover most of the bases for trolling in the shallower parts of the Raritan. My essential lures for trolling in a small boat include diving plugs, larger swim shads, smaller bunker spoons, and Mojos in the 2- to 4-ounce range.

To hook into these Raritan Bay stripers, the baits must be “in the zone.” What I mean is that you must find the right depth, generally a few feet off the bottom, to run your lures. While holding the rods, let out the line slowly under control, feeling if the lures bump the bottom at all.

Trolling speed is also important because the boat should be going between 3 and 4 miles per hour, no faster. If nothing happens in 15 to 20 minutes, slow the boat down and have everyone check their lines for weeds or fouled hooks. You must be engaged and feel the lures every so often to ensure they are running correctly. The fish will tell you when you’re in the zone.

On days when I’m marking large schools of bass on the machine but they won’t bite anything after I’ve adjusted the trolling direction, speeds, and almost every lure in the box, I pull out the (not so) secret weapon. In my experience, if stripers refuse single trolling lures, nine out of ten times they will still strike an umbrella rig.

Umbrella rigs mimic a school of baitfish swimming tight together. There are a number of commercially available ones, but I prefer to customize mine for the Raritan. I start with a 2-ounce, 4-arm umbrella with a snap swivel on each end. Next, I snell four 7/0 straight J hooks onto 12- to 16-inch leaders of 100-pound test. Onto each hook, I thread on a 6-inch chartreuse soft-plastic shad body.

I make sure to seat the hook firmly down the middle of the shad, exiting the top (flat) side toward its middle. (It’s a good idea to crush the barbs on these hooks to make them easier on fish you intend to release.) The vibration and action of these umbrellas make them irresistible to bass.

Before you head out to start your striper season in a big way, be sure to bring enough fuel for a day of trolling around. Have a good idea of how to work your electronics and make a game plan for where you want to fish, and then share that plan with someone on land. Check and double-check the forecast, and don’t leave home without an umbrella rig!