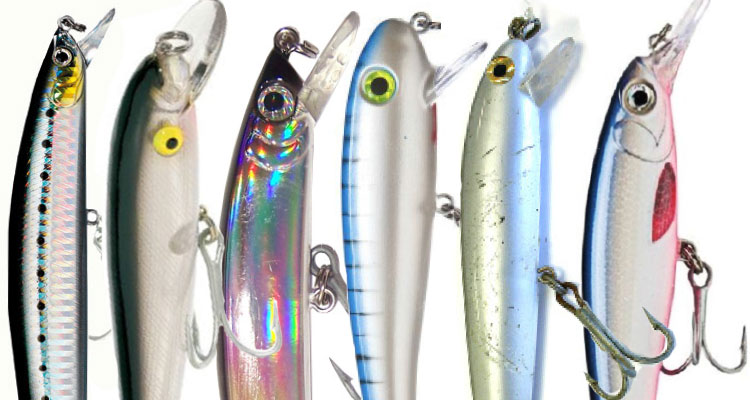 Minnow plugs have a lot going for them. They are widely available, they won’t break the bank—the average minnow plug costs less than $10, leaving some extra dough to stock up on more colors—and most importantly, they catch fish. Especially striped bass. Here are some of my favorites.

The Red Fin runs shallow, less than a foot under the surface, making it a top pick for sandy beaches, boulderfields and backwaters. Retrieve the Red Fin slowly enough, and it will stay on the surface, creating a long V-wake as it kicks across the top. This will usually get a quick reaction, making it a great “search lure.” Anglers will tie on a Red Fin first, fishing it as they work a stretch of shoreline, to determine where the fish are holding. The slim profile of the bait makes it appetizing to all sizes of stripers, from the very small to the very large.

If there is a downside to this plug, it’s the plug’s light weight, which can make it tough to cast. This can be overcome by “loading” the lure with BBs or water to add weight and casting distance. Many surfcasters will keep both loaded and unloaded Red Fins on hand, as the extra weight does change the action and an unloaded Red Fin is easier to swim on the surface.

For a slim plug measuring only 6 inches, the ability of the SP Minnow to call up super-sized stripers is impressive. Thanks to an internal weight that slide to the back of the plug during the cast, the SP Minnow sails long distances, but it dives to only 3 feet, keeping it off the bottom in all but the shallowest waters.

The Daiwa SP Minnow fishes especially well in hard-running currents, where it can be fished on a tight line while the moving water gives the plug its swimming action. The SP Minnow also benefits from a faster retrieve or a retrieve against the current, as the lure takes on a frantic, almost spastic action.

The “Mambo Minnow” plug style has been produced by several manufacturers, but Gags Grabbers is the best known of them. This lure has a more subtle action than other minnow plugs. It slowly kicks on most retrieves, and if you reel slowly enough, it will dive, but barely wobble at all, giving it a presentation closer to that of a needlefish. It fishes well over sand beaches and in current. It’s a popular lure in the springtime when herring are running, but it works in the summer and fall too.

Fish-attracting flash and big eyes make the Crystal Minnow a great “match-the-hatch” bait when stripers are feeding on spearing (silversides). The Crystal Minnow comes in a range of sizes and models, including floating, sinking, and deep-diving, that have made it popular for everything from stripers to false albacore.

This super-sized minnow bait measures 8 inches and weighs 2 ½ ounces. Diving only to 1 foot, it is a great lure for shallow boulderfields and sandy beaches. The large profile will draw big bass up from deep water, however. This lure works best in moderate to slow currents.

Getting down as deep as 8 feet, the Rapala Saltwater X-Rap is a great bait for probing deeper water off the tips of jetties or in inlets. The color lineup for this bait is superb, especially the bunker pattern. It has a slightly deeper body than the other lures on this list, but the shape gives this “slashbait” a fleeing-baitfish action that makes it a great daytime plug.

Originally made by Rebel, the Windcheater has been re-launched by Bomber. (Both brands are owned by parent company Pradco.) The lure has a huskier profile than most minnow plugs, along with some extra weight to help it cheat the wind and cast for distance. The Rebel version of this lure was a classic, popular among previous generations of surfcasters because its extra weight allowed it to be cast on conventional tackle.